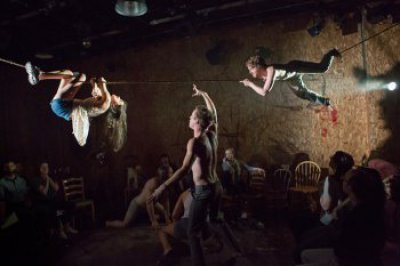 Kate Thulin, Jack Ellis and Mike Swift in a scene from “Wolf in the River” (Photo credit: Hunter Canning)

The prolific and audacious playwright Adam Rapp has written sci-fi plays, thrillers, realistic plays, social commentary, futuristic plays, and fantasies. His characters are usually on the verge of an extreme crisis. Now in Wolf in the River having its American premiere at the Flea Theater, he has taken on the Southern Gothic genre as represented by William Faulkner, Eudora Welty, Flannery O’Connor, Erskine Caldwell and Carson McCullers and written Wolf in the River, a self-indulgent exercise in myth-making with a great deal more violence than those authors usually depicted.

Directed by the author, Wolf in the River is an environmental production as the audience is invited to sit in folding chairs around a mound of earth with forlorn flowers, garbage and debris. However, there are set pieces and props located in the four corners of the venue as well. When the play begins, a man sitting in the audience gets up, strips off his shirt and shoes, and becomes the play’s narrator and master of ceremonies, as well as one of the characters. In an unnamed Southern American location, we are on the banks of a river (the audience is the river) filled with alligators. Six actors in pasty make-up wander around the outer perimeter of the room. Although the program does not explain their presence, the script reveals that they are the ghosts of those who have perished in the river. 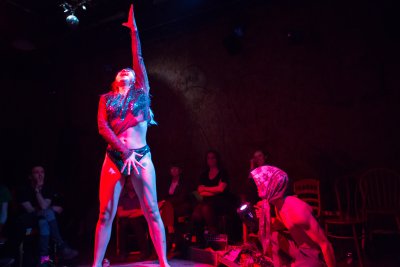 Xanthe Paige and Jack Ellis in a scene from “Wolf in the River” (Photo credit: Hunter Canning)

The narrator relates in flashback the story of 16-year-old Tana Weed, who has been many years orphaned, and has lived without her older brother Dothan for two years while he was in the military in Afghanistan. She has survived by being a member of a tribe run by the savage and cruel Monty Mae Maloney, her brother’s girlfriend, living in the woods by the banks of the river. Monty sells the blood of her tribesmen to make ends meet. That they don’t work is made patently clear: Dothan, dishonorably discharged, is suffering from PTSD and doesn’t speak; Aikin, Monty’s lieutenant, is a drug addict; Pin, an inarticulate lesser foot soldier in Monty’s tribe, seems to be simpleminded as we see him try to have sex with a blow-up doll. Tana is sent on errands to Monty’s mother Dumptruck Lorna (played by the narrator in drag) who never leaves her La-Z-Boy seat by the television, and Tana is generally abused by the others.

Things begin to go wrong when Tana meets Debo, a native of Benton, Illinois, who is skiffing down the river past where she is sun-bathing. When Tana attempts to leave in order to go off with Debo, everything transpires to make it impossible. The play which has alternate endings is told out of chronological order so that it makes it difficult to follow. The use of audience participation continually breaks down the illusion of the characters as real – although as the other theatergoers are always in one’s line of vision, it becomes a communal experience from the outset. Masks, violence, tall tales, songs, storytelling all are part of this untidy play.

While the audience may be confused by parts of the play, the cast made up of members of The Bats, The Flea’s resident company, appears to be gleefully enjoying their roles as they wallow in the hillbilly atmosphere of the play. As Tana, Kate Thulin is suitably vulnerable and sweet as she undergoes a series of trials, both frightening and physical. Xanthe Paige is required to sing, dance, threaten and emote as tribe leader Monty and she does all of these things with great zest. Playing the narrator, the Wolf in the river, and Monty’s white trash mother, Jack Ellis is both vulpine and menacing.

Maki Borden’s Debo is charming and debonair, while William Apps’ makes Dothan both dangerous and damaged. Karen Eilbacher’s addict Aikin is menacing and disconcerting, while Mike Swift plays the simpleminded Pin as both inarticulate and yearning. (As of April 4, Kristin Friedlander will assume the role of Monty and Olivia Jampol will replace Ellis as the narrator and the wolf, suggesting that at least one of the roles is rather fluid.) Alexandra Curran, Jack Horton Gilbert, John Paul Harkins, Artem Kreimer, Derek Christopher Murphy and Casey Wortmann as the Lost Choir wander around throughout the performance, often making eerie humming sounds as part of the play’s soundtrack.

Though Arnulfo Maldonado’s scenic design is very disconcerting, it works well in the context of this play. Michael Hili and Hallie Elizabeth Newton are responsible for the curious costumes for these backwoods people. The lighting by Masha Tsimring is instrumental in directing attention to the various corners of the space. Among other major production staff are fight director J. David Brimmer and aerial consultant Sarah East Johnson. Zach Serafin is responsible for the many unusual and strange props.

Described in the publicity materials as exploring “love and neglect, the challenges of poverty, the dangerous cost of shiftlessness, the simple notion of leaving a place behind, and the value of a girl,” Wolf in the River is more an exercise in the Southern Gothic tall tale tradition than anything else.  While it does touch on these themes, the scattershot way in which it handles them dilutes any real power they might have had. The Flea Theater production of Wolf in the River is more like a 1960’s happening with its non-linear plot line, colorful characters, startling imagery, gratuitous violence, weird goings-on, and use of myth and folk tale. It will not be to all tastes.

The Flea Theater, 41 White Street, between Church Street and Broadway, in Manhattan