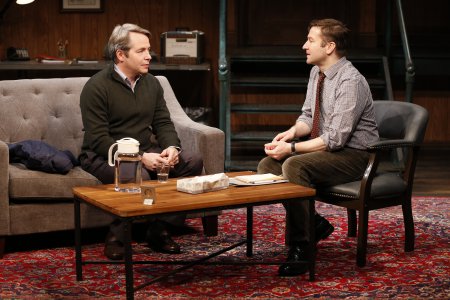 “I’m recently bereaved,” says Matthew Broderick in a perfect Irish accent as John, an Irish widower in his 50’s, to his therapist.  Since the recent death of his wife in a car crash, her ghost has haunted him.  This is one of several threads to Conor McPherson’s compelling psychological drama Shining City that is excellently being revived by the Irish Repertory Theatre.

Since his youthful career heyday of the 1980’s with major roles on Broadway in Neil Simon plays and starring in the enduring cultural touchstone film Ferris Bueller’s Day Off, Mr. Broderick has since continued on in such films as Election and the Broadway smash hit, The Producers.  Now 54, he is stockier, his hair is gray and his features are fuller but his charisma and commanding talent remains as does his inimitable grin and twinkling eyes.  Considering his indelible past successes, this role is quite challenging and he is winningly up to it.

Much of the part consists of relatively uninterrupted monologues that Broderick terrifically delivers that range from harrowing recollections to a visit to a brothel that is hilarious.  His characterization of this drab, depressed and tormented man is very moving and is a joyous case of riveting star/character acting.

A major theme of the play is the contrast between patient and therapist who is actually more troubled then his patient.  Not only is Ian a former priest in his 40’s caught up in a disintegrating relationship with his younger girlfriend Neasa who has recently given birth to their daughter, he has other dark qualities that are revealed. 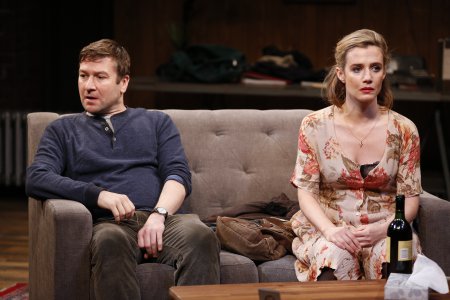 With his lean wiry frame and sorrowful eyes, James Russell is engagingly intense in the brief but pivotal role of Laurence, who dramatically intrudes into the plot.

Shining City opened in 2004, at London’s Royal Court Theatre for a six week run.  The Manhattan Theatre Club’s Broadway production had a limited engagement of 80 performances in 2006.

Set in contemporary Dublin, Mr. McPherson’s well-crafted and flavorfully Irish play rambles somewhat but is an intriguing blend of the spooky and the perceptively observed mundane.  This accomplished revival hasn’t unearthed a neglected masterpiece but does provide for thoughtful entertainment containing marvelous performances.