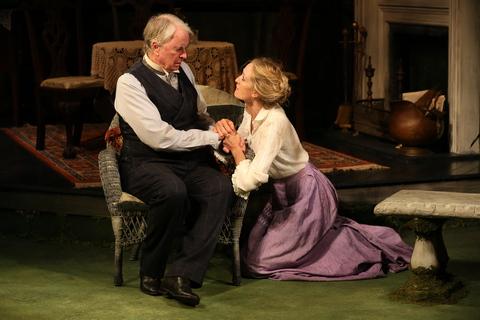 John Windsor-Cunningham and Rachel Pickup in a scene from “The Home Place” (Photo credit: Carol Rosegg)

Like her 2007 production of Brian Friel’s Aristocrats, Charlotte Moore has given the New York premiere of his last full-length play, The Home Front, an exquisite production. Beautifully cast, designed and acted, the play, their eighth Friel staging, does the Irish Repertory Theatre proud. The problem for many non-Irish Americans is that unless you know about the Irish Land Acts, the fight for Home Rule and the murder of cruel landowner Lord Leitrim in 1878, you may be at sea about the backstory of the play. Told with Chekhovian understatement, the play is the first one by Friel to deal with the Protestant English landowners who had called Ireland home for many years. It is also his final original play before his death in 2015.

Set in 1878 in the fictional town of Ballybeg, County Donegal, the scene of many of Friel’s most famous works, the play’s background refers to the Irish Land Wars. Ruled by Britain for centuries, the home rule movement in Ireland began in earnest in 1870 leading to Prime Minister William Gladstone’s Irish Land Act of the same year. However, rather than a reform, this actually made things worse and some Irish tenant farmers treated badly by the Anglo-English landowners for years rose up and rebelled against this injustice, going so far as to murder the hated Lord Leitrim in 1878 as a warning to other landowners.

Here renamed Lord Lifford by Friel, The Home Place is set just after his funeral where the only mourners are 11 Anglo-Irish landowners now afraid for their own lives. Christopher Gore and his son David, liberal well-loved Anglo-Irish landowners, return from the morning’s event to their home, The Lodge, in a state of agitation. They are met by local girl Margaret O’Donnell who has been their housekeeper for years. To make matters more complicated both are in love with her and wish to marry her unaware of the other’s interest, in a rather strange love triangle. 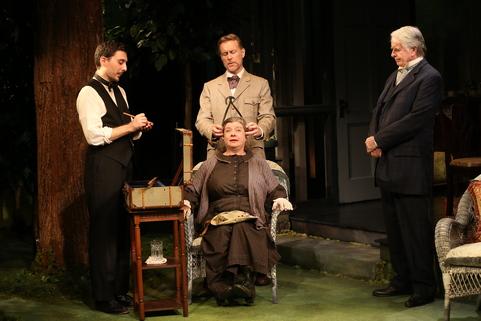 At this tense moment Christopher is hosting his cousin Dr. Richard Gore, an anthropologist, from the home place in Kent where Christopher had fond memories of his summers as a school boy. Under the influence of the new theories of Darwin considering ethnology (the comparative study of the physical characteristics of various peoples), Richard has come to Ballybeg for the purpose of measuring the locals in order to classify them by types. As a result, Christopher has put out a call for volunteers among his tenant farmers.

Richard is hoping to prove scientifically that the Irish are a lower race than the English. Unfortunately for both the racist Richard and the benign Christopher there are those in the community who object to this study, however scientific it may be. Con Doherty, a local Irish political rebel and agitator just back from a lecture tour of England, has taken objection to this study as another example of English oppression. The boyfriend of the saucy house maid Sally and a cousin of Margaret, he arrives with his henchman Johnny McLoone at the play’s climax. The outcome is a premonition of things to come.

The play is Chekhovian in more ways than one. Much like The Cherry Orchard, one can hear the new order knocking at the gates. Like Chekhov, nothing much seems to happen but eventually everything changes. At the end of the play, Christopher and David go off into the woods to mark dead trees that must be taken down, like the ending of The Cherry Orchard in which the new owners are cutting down the forest as the curtain falls. As there is little or no action until the play’s second half this also resembles Chekhov’s pastoral country settings where life tends not to deviate from the status quo until an unforeseen event, long foreshadowed, causes a disruption. Like Chekhov’s characters the Gores are landed gentry whose money comes from their property, land poor as they used to be called. 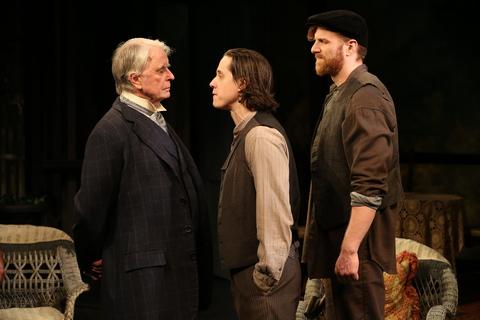 Under Moore’s polished direction, the cast give stylish, graceful performances on James Noone’s beautiful green indoor-outdoor setting. As the leading character, the Anglo-Irish landowner of liberal ideas, John Windsor-Cunningham (an actor who moved to New York from London ten years ago) plays a suitably conflicted and mild-mannered Christopher, a man who has intimations that his days are numbered. Making a strong contrast is Christopher Randolph as his arrogant and reprehensible cousin Dr. Gore. As Margaret, referred to by the doctor as the Gores’ chatelaine, Rachel Pickup (who also appeared in the Irish Rep production of Friel’s Dancing at Lughnasa) weaves a nimble balance between her countrymen and her beloved employers but must eventually take sides.

In the underwritten role of David, Christopher’s somewhat simple son, Ed Malone creates a portrait of a man who is living in a world of his own but able to cope very well with certain mundane matters. Andrea Lynn Green makes a most amusingly pert Sally, a maid whose behavior is just this side of insolent. As her boyfriend, the rebel leader Con Doherty, Johnny Hopkins gives a forceful performance as the coming man in the soon to erupt Irish troubles. Stephen Pilkington is scarily efficient as a yes man to Dr. Gore. In the second act appearances of Christopher’s tenants, Polly McKie as the Widow Sweeney and Logan Riley Bruner as the boyish young man Tommy Boyle swiftly make definite impressions as two very different types of locals. Robert Langdon Lloyd as Margaret’s alcoholic father, head of the famed local choir, also makes an immediate impression as a stereotypical Irishman.

Aside from Noone’s lovely visual picture with its wide expanse of lawn backed by the Gore’s comfortable breakfast room, costume designer David Toser has created a period perfect array of costumes that immediately reveal economic status as well as personal character traits. The subtle lighting design by Michael Gottlieb coming through the trees adds to the idyllic atmosphere of the Gore estate over the course of the one day. The original music by Ryan Rumery and M. Florian Staab is a moody and melancholy piano played in the late romantic style. Stephen Gabis is responsible for the various dialects needed for this eclectic society.

It is possible to enjoy Brian Friel’s The Home Place without knowing the background to this historical play set in rural Ireland in 1878 as a Chekhovian representation of a world about to come to an end. However, the play will be much more meaningful if one knows the historical events that have led up to this turn of events. Charlotte Moore’s handsome and genteel production will be enjoyed most by those who understand the play’s undercurrents and implications. The low-key staging of this subtle play which does not spell everything out requires the audience to be adept at reading between the lines.