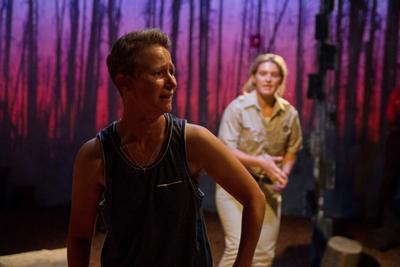 Drae Campbell and Meryl Jones Williams in a scene from “Only You Can Prevent Wildfires” (Photo credit: Jody Christopherson)

Elaborately presented but dramatically deficient, playwright Harrison David Rivers’ Only You Can Prevent Wildfires imagines the events surrounding the largest forest fire in Colorado history in 2002.  Smokey The Bear appears throughout the play. He’s “A figment of everyone’s imagination. Or maybe not.”

The incident might have made for a 1970’s style, all-star cast disaster movie, or a simple theatrical inquiry.  Instead, Mr. Rivers offers a dull marital drama that’s been realized by tremendous stagecraft to no great purpose.

The Hayman fire caused nearly $40 million in firefighting costs, burned 133 homes, 138,114 acres, and forced the evacuation of 5,340 people.  One person died from an asthma attack brought on by the fire and five firefighters died from injuries sustained in a traffic accident en route to the fire.  The play doesn’t go into much detail about these facts.  The cause was determined to be arson.  Rivers’ scenario is a fantasia on the matter.

Forestry technician Terry Lynn Barton has been married to John Barton, an amiable workingman, for 15 years.  They have two small daughters, are under a lot of economic pressure and their marriage has become strained.  We certainly know this because Dolly Parton’s song “Jolene” is frequently played in the background.  John has been hooking up with other women and taking cross-country jobs, and Terry files for divorce.  John writes her a letter, the contents of which are never known as the emotionally distraught Terry burns it, and that causes the fire.  That she later a received a prison sentence is not mentioned. 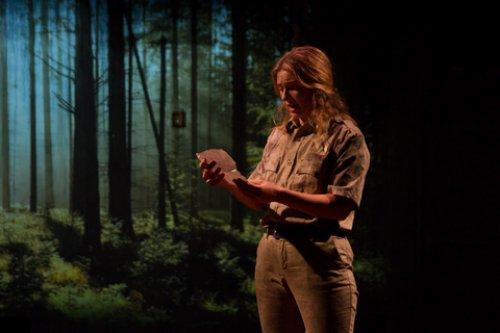 Meryl Jones Williams in a scene from “Only You Can Prevent Wildfires” (Photo credit: Jody Christopherson)

Kim Jones is the government investigator who is obsessed with bringing the culprit to justice.  This takes a toll on her lesbian relationship with Kal, a pleasant woman who sold her New Mexico business to relocate to Colorado to be with Kim.  The play shifts back and forth between the two couples.  An actor in a ranger uniform and a bear mask wafts in and out interacting with everyone as Smokey The Bear.  “Nothing stays the same” is representative of the words of wisdom that he imparts.

Rivers’ treatment is uninvolving but the technical aspects are arresting, though these do not salvage the material from tedium.

The audience sitting on three sides of the airy playing area on wooden benches is part of Clifton Chadick’s super, environmental scenic design.  The floor is covered with wood chips, logs and tree stumps, there are a several jagged wooden poles and a few red fire buckets strewn about.  On one end is a stage area and the other is a screen where Joey Moro’s atmospheric projection design is shown.  The crisp imagery includes fires, nature and abstractions.  For several distracting instances the actors at the other end of the stage are projected onto the screen for no discernable reason other than as an aesthetic flourish.

Caitlin Bailey and Ali Perkins’ choreography is a series of dance-style movement and frenetic jogging sequences that are accomplished, but are arguably out of place in a play about a catastrophic fire.  It’s in keeping with the performance art incarnation of the material. 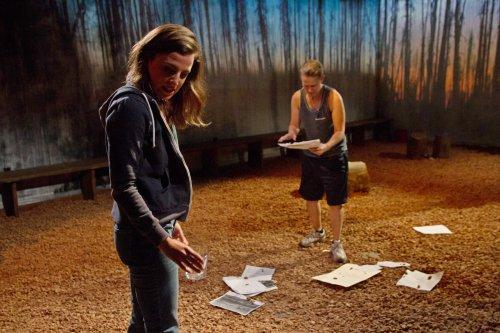 Mikaela Izquierdo and Drae Campbell in a scene from “Only You Can Prevent Wildfires” (Photo credit: Jody Christopherson)

Director Sherri Eden Barber has creatively melded all of the superior technical features into a striking if at times a sensory overloaded production.  The central performances are for the most part equally overwrought.

The excellent actors, Meryl Jones Williams and Drae Campbell respectively portray Terry Lynn Barton and Kim Jones. They both offer fiercely emotional characterizations that verge on the hyperbolic, and they’re electric when confronting each other.  At times they recall Inspector Javert’s pursuit of Jean Valjean in Les Misérables.

Mikaela Izquierdo is pleasantly understated as Kal and has some fine moments when erupting in anger.  With his soothing voice and graceful physicality, the  masked Adam A. Keller makes a warm impression as Smokey The Bear. The highly personable John J. Concado’s low-key naturalism as John Barton is the most enjoyable highlight of the show.

In tackling such horrendous subject matter, Only You Can Prevent Wildfires could have used less flashiness and more straightforwardness.

Only You Can Prevent Wildfires (through October 28, 2017)

Smokey The Bear appears in this elaborately presented docudrama about a major Colorado forest fire in 2002 that was started by an unhappy female ranger.