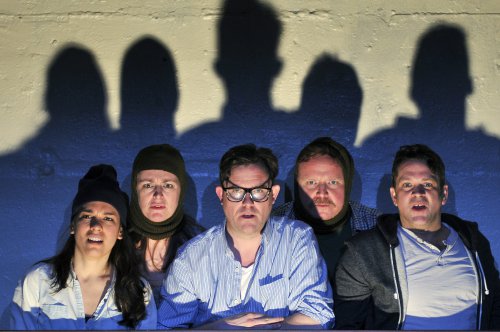 Susannah Millonzi, Andrus Nichols, Eric Tucker, Edmund Lewis and Tom O’Keefe in a scene from “Twelfth Night, or What You Will”) (Photo credit: Jenny Anderson)

Since Bedlam Theatre Company arrived on the radar in 2013, theatergoers have left their performances as devoted fans. Beginning with acclaimed productions of Hamlet and Saint Joan in the fall of 2013 and an extended run in the spring of 2014 with casts of only four actors, they returned last fall with a delightfully faithful and inventive stage adaptation of Jane Austen’s Sense and Sensibility. The same four actors who appeared in Bedlam’s Hamlet and Saint Joan are back (along with Susannah Millonzi) in two alternate versions of the same Shakespeare comedy, one titled Twelfth Night and the other, What You Will. Minimalist and clever to the nth degree, the Twelfth Night performance under review brought the audience to its feet at the end of the two (ingenious and intermission-less) hours.

Artistic director Eric Tucker who has directed the other three productions is the genius behind this dual achievement. As he has only five actors to work with for 12 characters, all play multiple roles and sometimes shift the same character among them with the exchange of a hat or a pair of glasses in the same scene. The stripped down, minimalist production, a hallmark of Bedlam, takes place in the 50-seat Dorothy Strelsin Theatre painted entirely white and using only a long table, three chairs, and a couple of empty liquor bottles. In the version called Twelfth Night under review, the play begins around the table as though it were a rehearsal with the actors in street clothes and takes off from there; the tone is dignified, romantic and serious but enormous fun. (In the alternate version, the actors are in white costumes and the tone is more physical and knockabout.)

Both versions stick to Shakespeare’s text, but with the actors switching roles. Twelfth Night’s plot concerns the shipwrecked Viola who finds herself along with the Captain of her ship in the city of Illyria, believing her twin brother Sebastian to have drowned. However, we discover very soon that Sebastian and the another sea captain Antonio have also washed up in Illyria. Disguising herself as a man, Viola as Cesario enters the service of Duke Orsino who believes himself to be in love with the Countess Olivia. However, Olivia is in mourning for her late father and brother and refusing to see any suitors for seven years. While “Cesario” is sent to woo Olivia in the Duke’s name, Olivia falls in love with the disguised Viola who has fallen head over heels in love with her Duke. A complex love triangle results.

In the meantime, Olivia’s retinue decides to make her Puritanical steward Malvolio believe she is madly in love with him. In on the plot are her dissolute uncle Sir Toby Belch, her mischievous servants Maria and Fabian, and another suitor, the inane squire Sir Andrew Aguecheek. Complicating the plots are Sir Andrew’s challenging “Cesario” (i.e. Viola) to a duel to eliminate one of his rivals, and the fact that Sebastian and Viola (now dressed as a man) keep getting confused for each other. With Malvolio attempting to win Olivia and her knowing nothing of his infatuation, he is heading for a fall, while Olivia’s love for Cesario/Viola would be a dead end if not for Sebastian, her male double. In the end, this being a comedy, all works out for the leading characters except Malvolio, the killjoy of the holiday spirit, in this entertainment originally devised for the 12th night of the Elizabethan court Christmas celebrations. 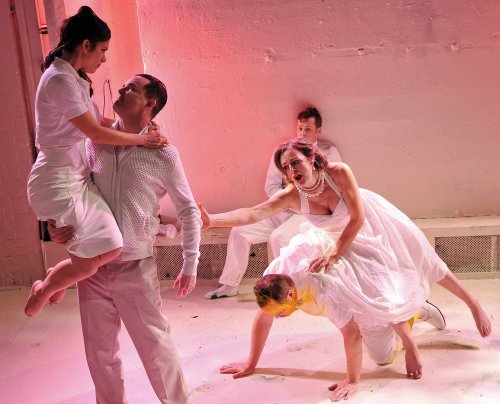 Susannah Millonzi, Eric Tucker, Edmund Lewis (on floor), Andrus Nichols and Tom O’Keefe in a scene from “What You Will, or Twelfth Night”) (Photo credit: Jenny Anderson)

Keeping in mind that in Elizabethan times, the women’s roles were played by boy actors and as a result in Shakespeare comedies the “women” often disguise themselves as men for various plot reasons (a joke the audience was obviously in on), Tucker has gone one better. He plays both twins, Viola and Sebastian, so that when Viola disguises herself as Cesario no costume change is needed. To push the gender idea further, when Cesario obtains the job with Duke Orsino (Andrus Nichols) carrying messages to his ladylove Countess Olivia (Susannah Millonzi), both are played by women which does not test contemporary sensibilities. However, throughout the play gender identification remains fluid as various actors play members of the opposite sex at different times, a notion both Elizabethan and contemporary.

Among the unforgettable pieces of business are Viola’s glasses being passed among the actors switching roles, a vaudeville act with hats, a chase scene around the table by the entire company and a scene entirely in darkness which puts the audience in the same dark chamber with the much abused Malvolio. The sleight of hand with the actors playing multiple roles includes Nichols as the amiable, laid-back Duke Orsino with a big hat and Olivia’s cunning servant Maria with her changing into an orange apron which magically appears as if out of the air. Edmund Lewis is an affected and pompous Malvolio, as well as the level-headed Captain.

Tom O’Keefe is responsible for the guitar music (composed by himself and Lewis) which accompanies the several songs Shakespeare wrote for this play including the well-known, “O mistress mine.” He also has fun playing the clown characters, Feste and Fabian. Millonzi makes two distinct genders out of the romantic Countess Olivia and the foppish Sir Andrew, while Tucker is remarkable as Viola, Sabastian and Sir Toby, definitely a feat of legerdemain.

On the basis of Twelfth Night, Bedlam proves itself to be a theatrical force to be reckoned with. It also sets the bar high for other groups that perform Elizabethan as well as other classics. Enviable the theatergoer who gets to see both versions of Twelfth Night/What You Will from this delightfully inventive theater company. Their invention and talent will awe you.