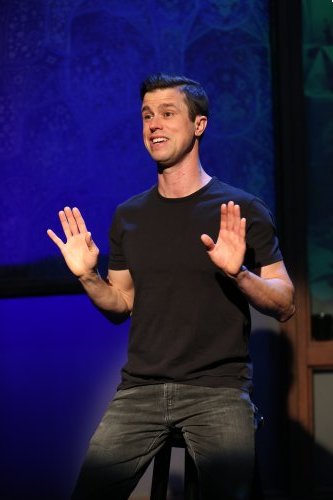 Bay Area–based writer and performer Dan Hoyle is a practitioner of “journalistic theater”—productions in the spirit of reality-based stagings by the likes of Anna Deavere Smith. When Hoyle embarks on a project, he meets, interviews and records people’s words—encouraging them to talk freely about their lives. Later, he turns what he has gathered into monologues. He modifies and augments the raw material that he gets from his interviewees in order to create a thematically arranged presentation. Sometimes, he’ll revisit his subjects before opening night to help fine-tune his living portraits. He seems to treat his subjects as active collaborators in his art. Some of them he considers to be friends.  At the very least, he is transparent with them from the outset about the fact that he’s using their realities to create stage characters.

Now Hoyle has brought his most recent play, Border People, to New York City in a production directed by Nicole A. Watson. It’s a work dedicated to people who dwell along borders of various sorts—“geographical or cultural”—and it suggests that no matter how clearly lines of demarcation may be drawn, they can seem arbitrary and sometimes strangely porous. Hoyle presents nearly a dozen characters in this show: diverse in age, gender, race, nationality, religion, sexuality and temperament. He includes people from one side or another of actual U.S. borders, both to the north and to the south. We also meet characters from the Bronx who live along the borders that separate the borough’s “projects” from the outside world.

Whether Hoyle spoke with many people whose stories didn’t make the cut is unclear, but the ones who are included turn out mostly to be fascinating people, full of sharp surprises. He begins the piece with Lopez, a border patrol officer in the American Southwest who admits to doing a little standup comedy on the side. In the vignettes that follow, we meet—among others—a Mexican-born ex–U.S. Marine who was deported back to Mexico and wound up in Ciudad Juarez; a “redneck-y” gay, pagan goatherd who sometimes assists illegal border-crossers in Arizona; an intellectual African-American living in the Bronx projects who can elucidate race and gender politics with great verbal dexterity; and a female Iraqi refugee living in Lancaster, Pennsylvania, whose “first true love” was American literature. Bringing things full circle, Hoyle returns to Officer Lopez near the end of the show. 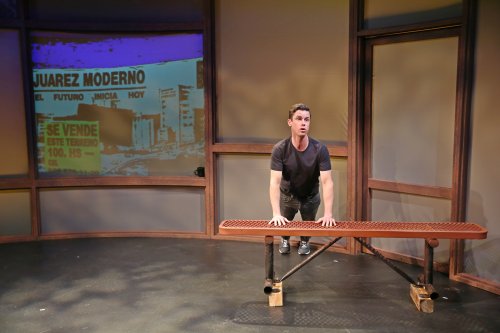 Each monologue is paced differently and has a distinct flavor. For some characters, Hoyle remains rather still. As the exiled Marine, he moves about the stage energetically, practicing calisthenics. He wears a T-shirt, jeans and sneakers throughout, but in one scene he’ll tuck in his shirttails and in another, he’ll roll up his sleeves like James Dean in his teenage prime. Simply adjusting his hair slightly seems to help him switch effortlessly to a new persona. He makes adjustments vocally also—not just by adopting a character’s national or regional accent, but by varying pitch, tone and velocity of speech.

The production values here are highly professional and polished. Frank Oliva’s set design is rather simple, consisting of a paned backdrop, a stool and a bench. But the contributions of lighting designer Jimmy Lawlor, sound designer Jorge Olivo and—especially—video designer Yana Birÿkova give the presentation a rich, technophilic sheen.

The play is engaging from moment to moment, and this may be a case of the parts being greater than the whole. There is, of course, no central plot or protagonist. The play makes many varied suggestions about what it means to be a border person, and it tends to highlight characters’ adaptability or lack thereof. It doesn’t, though, make any sweeping pronouncements—nor should we necessarily want it to. To do so might defeat Hoyle’s intentions altogether.