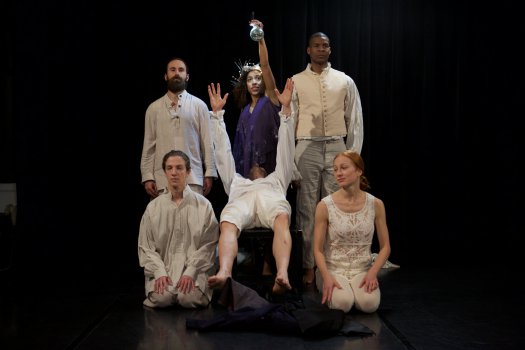 Handel’s Messiah is heard as various Londoners played by five actors rapturously dance. Ebenezer Scrooge in a long black coat and black hat looms in the background center stage.  Scrooge walks very slowly and is gradually downstage and then this wonderful, faithful and stylized adaptation of A Christmas Carol actually begins.

This grand, symbolic, strikingly lit opening sequence using a mirrored disco ball is just one of the highlights of this inventive 95 minute production.  Its accomplished staging, design and racially diverse and gender fluid performances all make it a stimulating and thoughtful experience true to the spirit of Charles Dickens.

Fezziwig’s Ball is a delirious production number set to Lady Gaga’s “Applause.”  The cast performs frenetically doing numerous cool moves and even the young Scrooge gets into it.  Though there is just a cast of six, many times it seems as if the small, bare, black stage is jammed with Dickensian crowds.

Playwright Matt Opatrny has very skillfully pared down the 1843 novella into a swiftly effective, taut retelling.  The characters, familiar dialogue and plot are all there with artful flourishes.

Director and choreographer Jessica Burr has created a number of dazzling moments with her precise unison of expressive staging, movement and dance.  With only a few vintage trunks and a door, all on wheels, Ms. Burr achieves many vivid stage pictures.  Walking up a flight of imaginary stairs is a thrilling display of mime. Burr’s work with the ensemble, most of whom play several roles is excellent with their colorful characterizations as evidence. 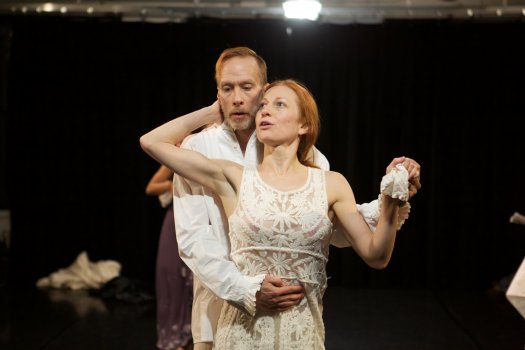 The vocally and physically impressive J.Stephen Brantley with his lean and athletic physique and bearded, gaunt face is a great Scrooge.  Mr. Brantley’s rich voice has a sinister timbre while declaiming Scrooge’s famous lines but is quite touching in the redemptive finale after the here unseen Ghost of Christmas Yet To Come has visited him.

Walking around on stilts in a tattered white frock coat and white clothing, the gregarious Joshua Wynter is cheerfully eerie as Jacob Marley.  Mr. Wynter is also a jolly Fezziwig and the tender husband of Scrooge’s old flame Belle.  As The Ghost of Christmas Present, Wynter is raised up and towers in yards of white cloth while proclaiming.

Bearded and impish, Nathan Richard Wagner’s is a moving Bob Cratchit. Mr. Wagner is also equally hilarious in drag as Mrs. Fezziwig and as the garbled voiced seller of the prize turkey Scrooge buys for The Cratchits.

With the command and swagger of a Shakespearean heroine, Becca Schneider winningly plays Scrooge’s nephew Fred, Scrooge’s doomed sister Fan, and a barkeep.  Ms. Schneider is also a quirky and affecting Tiny Tim, hobbling around on that fabled crutch.

Claire Fort has a serene dignity as Bob Cratchit’s wife Helen.  Wearing a lighted wreath on her head, Ms. Fort is also a spritely Ghost of Christmas Past and is one of the charitable solicitors. 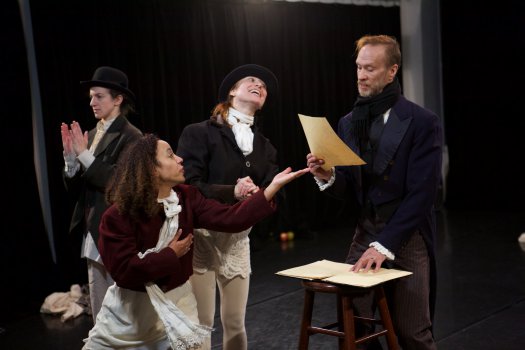 The scenic and props design by Mr. Opatrny & Neal Wilkinson is minimalism extraordinaire.

Bits of “Santa Baby,” “Jingle Bell Rock” and Elvis Presley are incorporated into Sam Kusnetz & Beth Lake’s dynamic sound design.  Their work is chilling when after Scrooge’s death we hear the scavengers at his house prying out his gold fillings with a hammer in the darkness as well as the sound of rats.

Presented by the Blessed Unrest theatre company, this production of A Christmas Carol is a delightfully aesthetic opportunity to once again savor the profound joy of this enduring story.