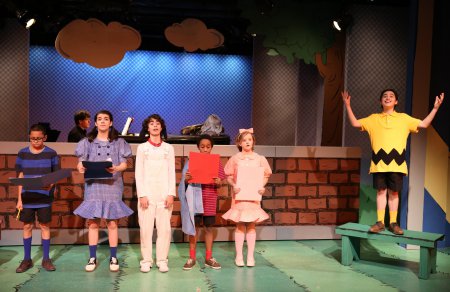 The York Theatre Company’s entertaining revival of You’re a Good Man, Charlie Brown has the novelty of being performed by a cast of lively professional child performers.  This is the first time in New York City that a company of children portrays the beloved Peanuts characters in a major production.

Joshua Colley is a perfectly wistful Charlie Brown and wonderfully sings “The Kite” while holding a long string that goes out into the audience.  Mr. Colley’s understated and charming performance faithfully conveys the fabled angst of the character.  From June 1-7, Snoopy and Charlie Brown standby Graydon Peter Yosowitz will be filling for in Joshua Colley.

Whether leading the company in top hats and walking sticks for the production number “Suppertime” or riding on his doghouse for the aerial sequence “The Red Baron,” Aidan Gemme is a sensational Snoopy.  With his irresistible charisma, he makes the most of this showy role for which Roger Bart won the 1999 Tony Award for Best Featured Actor in a Musical.

With her intense facial expressions and unique presence Milly Shapiro is a captivating Sally who turns her duet with Schroeder, “My New Philosophy,” into a showstopper.

Exhibiting terrific dance moves and a sunny personality while twirling his blanket during “My Blanket and Me,” Jeremy T. Villas is a marvelous Linus.

Sitting inside the psychiatric treatment center where the fee is five cents for “The Doctor is In,” Mavis Simpson-Ernst is a magnetically feisty Lucy. 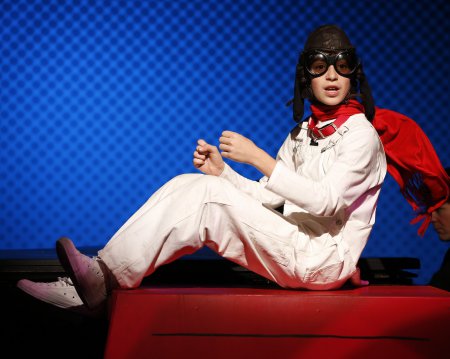 For the euphoric “Beethoven Day,” Gregory Diaz is joyous as Schroeder playing a small piano with a tiny bust of the great composer atop it.

Director Michael Unger and choreographer Jennifer Paulson-Lee have staged the historic comic strip with small-scale flair.  The performances and dancing are of high caliber and the scenes swiftly and effectively shift onward.

Cartoon-style painted clouds and trees surround the stage, Charlie Brown in an upright bed, the center stage piano on a small turntable that reveals Snoopy’s doghouse are all elements of Brian Prather’s arresting scenic design.

Costume designer Grier Coleman has wittily and inventively reimagined those trademark outfits that are all here, including, of course Charlie Brown’s yellow shirt with black stripes.

The look of the show is further enhanced by Graham Kindred’s dynamic lighting design.

Music director Eric Svejcar is expert on piano, and leads Mark Verdino on bass and Adam Wolfe on drums.  Mr. Svejcar is very visible and very personable throughout the show. 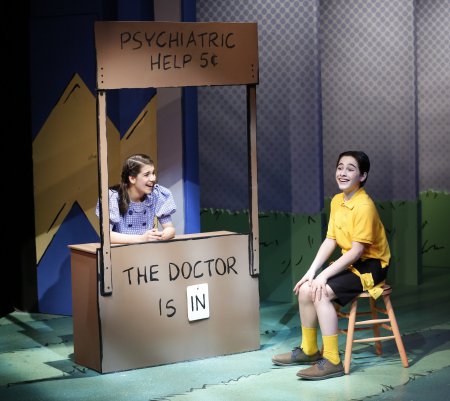 In 1966, after obtaining Peanuts creator Charles Schulz’s permission, composer and lyricist Clark Gesner (1938-2002) recorded a concept album of songs based on the characters.  In 1967, a theater adaptation with a book comprised of vignettes by Mr. Gesner opened Off-Broadway at Theatre 80 on St. Marks Place in New York City’s East Village.

Critical reaction was positive and included a rave review by Walter Kerr in The New York Times.  The show ran for nearly four years and there were several road companies that performed it throughout the United States and Canada.

A reconceived larger-scale version opened on Broadway in 1970, for a flop run of 32 performances.  The 1999 Broadway revival with new songs by composer and lyricist Andrew Lippa and additional material by director Michael Mayer was also unsuccessful, with a run of 149 performances.

This production combines the simplicity of the 1967 Off Broadway original version with the additions from the 1999 Broadway revival, using two of Mr. Lippa’s songs and much of Mr. Mayer’s additions.  Most notable is replacing the character of Patty with Charlie Brown’s sister Sally.  For this role, Kristin Chenoweth won that year’s Tony Award for Best Featured Actress in a Musical.

All of the permutations of the show end with the resonant ode to childhood innocence,  “Happiness.”  Hearing actual children sing it is a moving conclusion to this special incarnation.

Running time:  two hours and 15 minutes with one intermission