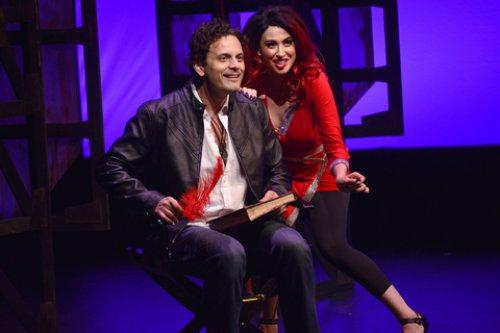 Wayne Wilcox and Lesli Margherita in a scene from “Matthew McConaughey vs. The Devil: An American Myth” (Photo credit: Michael Kushner)

One mediocre musical number follows another in the lame Hollywood satire Matthew McConaughey vs. The Devil: An American Myth.  The catchphrase “All right!  All right!” and bongo drums and marijuana are all prominently featured.

In this smug fantasia, Matthew McConaughey is downbeat about his stalled career and envious watching Leonardo DiCaprio getting choice roles.  A young Asian woman wearing a baseball cap that says “Leo” plays him. This grating conceit is complemented by abundant profanity.  McConaughey’s best friend (and perhaps more) Woody Harrelson is constantly around offering support and companionship for getting high.

Enter Mephistopheles, agent for Satan, arrives with the script of The Dallas Buyers Club (here called “The Texas Buyers Club”) and the promise of an Oscar.  Of course this involves McConaughey signing away his soul.

Emilie Landmann and Carrie Morgan’s book is an arch rehash of Damn Yankees crossed with the arcane inside-the-film-industry sensibility found in an episode of Entourage.  It’s a strained spoof that chiefly falls flat.

The score is an adequate collection of pop and show tunes that don’t add up to much.  Jonathan Quesenberry’s music is pleasantly derivative.  The lyrics by Morgan and Mr. Quesenberry are passable. 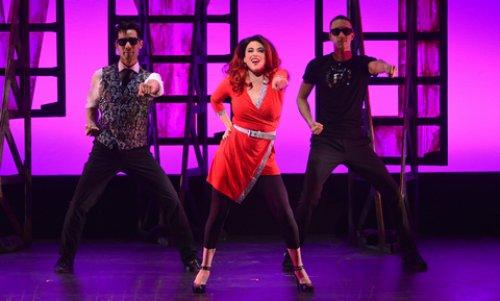 Leslie Margherita and ensemble in a scene from “Matthew McConaughey vs. The Devil: An American Myth” (Photo credit: Michael Kushner)

Vamping and slinking around in a bright, red tunic laden with rhinestones and wearing black tights, the vivacious Lesli Margherita steals and salvages the show as Mephistopheles.

With the physical allure of the young Gina Gershon and the musical comedy talents of the young Donna Murphy, and her own quirky persona, Ms. Margherita is commanding.  It’s a proverbial case of “I couldn’t take my eyes off her,” and “everything she said and did got a laugh.”

Off to the side, and relentlessly texting Satan from her red smartphone, Margherita draws focus.  When she plows through her numbers with her exquisite performing skills and razzle dazzle reminiscent of a Bob Fosse heroine, you forget how poor the show is.

His hair styled like that of McConaughey, the personable Wayne Wilcox offers a light channeling rather then a full out impression that’s enjoyably effective.

The appealing Jennifer Blood is wound up and increasingly frantic as McConaughey’s stalwart agent Penny White.  The nerdish Max Crumm is an amiable Woody Harrelson. 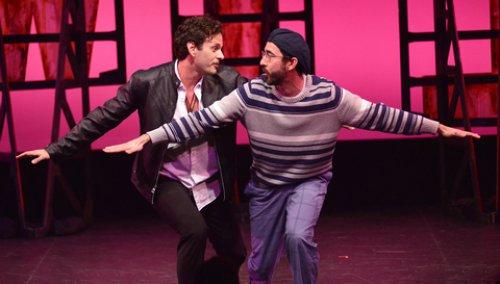 Wayne Wilcox and Max Crumm in a scene from “Matthew McConaughey vs. The Devil: An American Myth” (Photo credit: Michael Kushner)

Director Thomas Caruso’s staging is energetic and does keep the pace and the action moving.  Billy Griffin’s polished choreography enlivens the intended comic dance sequences.  There’s several fun gospel numbers and a cool dream ballet with dancers appearing as a marijuana leaf, an Oscar, a bong and a bag of pot.  Daryl A. Stone’s witty costumes are a great virtue.

Weathered metal platforms with the various obverse letters of the famed Hollywood sign are scattered about the stage and symbolically frame the action, the predominant aspect of James Fenton’s artful scenic design.

Andrew Keister’s sound design starts off blaring and gradually settles down.  The lighting design by Zach Blane is a steady blend of straightforward brightness and strategic crimson hues.

Matthew McConaughey vs. The Devil: An American Myth is presented as part of the 2017 New York Musical Festival.  This annual event showcases a wide selection of emerging works that are given small-scale productions as a testing ground for the future.

This incarnation demonstrates that it could be viable as a jokey diversion for some audiences and a groaning ordeal for others.