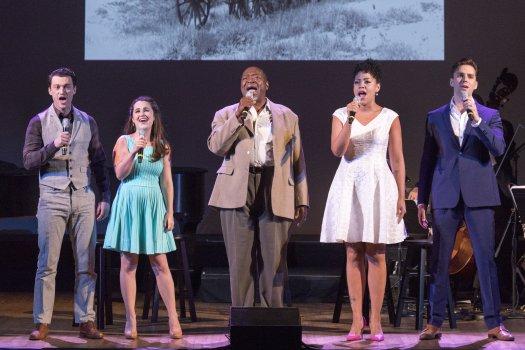 When it comes to Broadway musical teams, this particular reviewer readily admits to having a decided preference for Rodgers and Hammerstein. But Lerner and Loewe is a strong, second. To merely cite their five most legendary shows, should begin to confirm just how lilting and brilliant their songs can be: Brigadoon, Paint Your Wagon, My Fair Lady, Camelot and Gigi.

Long established as an annual series of shows at the 92nd St. Y–though not always of the same caliber–the Lyrics & Lyricists hit a home-run with their latest, From Camelot to California: The Worlds of Lerner and Loewe. (Gigi was actually written for the big screen as opposed to for Broadway, which may be how “California” worked it’s way into the show’s title.) The show’s writer and host, Rob Berman, introduced many of the songs and, essentially, gave us the story of Lerner and Loewe’s difficult, on-again, off-again partnership. Referring to them, at one point, as an “odd couple,” Berman explained that the composer Frederick (or “Fritz”) Loewe was an “old world” European, and lyricist Alan Jay Lerner a “New York sophisticate,” who was educated in England. Berman also claimed that the common denominator for all of their musicals was a kind of “idealism,” making the pair “dreamers.”

Everything about From Camelot to California… was smart: from the writing, to the choice of singers, to the way Berman had organized the songs, which are neither chronological nor by show, rather thematic. There were even appropriate and often evocative images projected on a screen, for each of the songs performed. After the entire five-member cast sang the “Overture,” Lauren Worsham brings her clear, crisp soprano to “Waitin’ For My Dearie” (from Brigadoon), followed by tenor Bryce Pinkham, who humorously crawled out from under the grand piano to deliver, with apt fear and anxiety, “I Wonder What the King is Doing Tonight” (from Camelot). 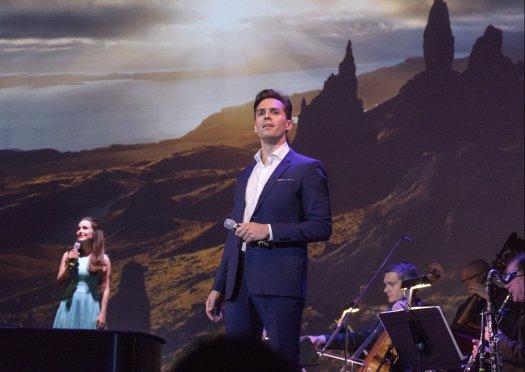 Lauren Worsham and Ryan Silverman as the performed “Almost Like Being In Love” from “Brigadoon” in 92Y’s Lyrics & Lyricists Series: “From Camelot to California: The Worlds of Lerner and Loewe” (Photo credit: Richard Termine)

It’s worth noting that Pinkham and Worsham recently had a long run together in the Tony Award-winning A Gentleman’s Guide to Love and Murder. Berman made the most of their connection by pairing them up in a number of ways during the show, including a duet of “From This Day On” (Brigadoon), and then placing Pinkham’s “She Is Not Thinking of Me” just before Worsham’s “The Parisians” (both from Gigi).

Other highlights of the evening found Chuck Cooper lending his richly deep baritone to “Wand’rin Star” (Paint Your Wagon) and Pinkham joining forces with baritone Ryan Silverman for the most wickedly competitive “C’est Moi” (Camelot) you’re ever likely to hear. With her lovely alto voice, Lilli Cooper (Chuck’s daughter, who’s well in the process of establishing herself as a Broadway force to be reckoned with) brought an appropriate urgency to “How Can I Wait” (Paint Your Wagon) and just the right fierceness to Eliza Doolittle’s “Show Me” (My Fair Lady). As with the best of singers, each of those on hand for From Camelot… created a different character for each of their songs.

And then, there are Berman’s delicious and surprising anecdotes regarding both the lyricist and the composer, including that Lerner, a notorious womanizer, was married eight times, and that Loewe, a more reluctant creator or worker, was also a boxer and a “cow-poker.” Despite it’s glorious score, Paint Your Wagon was not a hit with the critics, which prompted Berman to share a hilarious back-story: when Lerner complained to the show’s choreographer Agnes DeMille that she cared about the dances more than the book, DeMille replied: “What book?” (As for all of the Lerner and Loewe shows, Lerner wrote the librettos as well as the lyrics.) 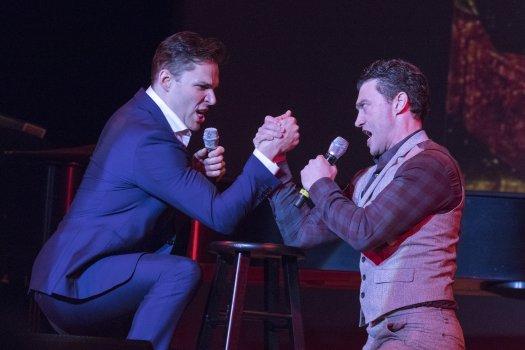 Ryan Silverman and Bryce Pinkham singing and competing in “C’est Moi” from “Camelot” in 92Y’s Lyrics & Lyricists Series: “From Camelot to California: The Worlds of Lerner and Loewe” (Photo credit: Richard Termine)

With consistently pleasing results, the five-piece band was assuredly led by Mark C. Mitchell (“conductor & piano”), and Joshua Clayton and Larry Moore were responsible for the first-rate orchestrations. The decision to combine “I’ve Grown Accustomed to Her Face” (My Fair Lady) with the title song from Gigi–both sung with a wistful longing by Silverman–was nothing less than brilliant.

Like all theater, Lyrics & Lyricists is ephemeral by nature. It’s a shame that the latest version, devoted to Lerner and Loewe, didn’t stick around long enough for more people to catch it, before it evaporated into theatrical memory.

Running time: two hours and 10 minutes including one intermission