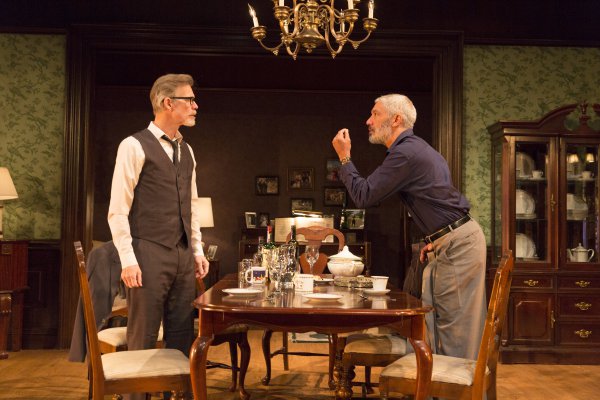 Tom Nelis and Peter Francis James in a scene from “The Winter’s Tale” at the Pearl Theatre (Photo credit: Richard Termine)

The Winter’s Tale is classified as one of Shakespeare’s “problem plays” or “dark comedies” and as such it does not get produced very often. Under the direction of The Shakespeare Society’s Michael Sexton, The Pearl Theatre’s revival is elegant and entertaining. It solves some of the play’s problems while creating new ones. Surprisingly, the contemporary sets by Brett J. Banakis and costumes by Tilly Grimes work amazingly well for a tale told of the 16th century.

The play has a fairy tale plot and is also a cautionary tale. King Leontes of Sicilia has been hosting his childhood friend, King Polixenes of Bohemia, for the past nine months. When Polixenes informs him that he must return home, Leontes begs him to stay a bit longer but to no avail. When Leontes asks his pregnant Queen Hermione to entreat him, he is astounded when she is successful. Leontes immediately becomes possessed with jealousy and gets into his head that Hermione and Polixenes are lovers and that her unborn child is not his. When he orders his loyal follower Camillo to poison Polixenes, Camillo and the King of Bohemia flee for their lives.

Furious at their escape, Leontes accuses Hermione of adultery, declaring her unborn child illegitimate, and throws her in prison. When the child, a girl, is born her lady-in-waiting Paulina takes the baby to the king, hoping that the sight of her will bring him back to his senses. However, the child only fuels his rage, and he demands that Paulina’s husband Lord Antigonus abandon it in some desolate place, which turns out to be Bohemia, Polixenes’ land, when he is shipwrecked there. In the meantime, Leontes’ son Mamillius dies as a result Paulina’s reports that Hermione has collapsed and died. Grief-stricken, Leontes’ rage is now spent and the lonely king repents his previous accusations. The second half of the play takes place mainly in Bohemia 16 years later. As this part of the play is a comedy, not everything we were told turns out to be true and like a fairy tale, all is resolved allowing for a happy ending.

As the first three acts are tragic and the last two are comedic, The Winter’s Tale is what is known as a “broken-backed play.” This means that the director has to deal with a tremendous shift in tone – one act dark, and one act sunny, usually accomplished as it is here with an intermission separating the two parts. This Sexton accomplishes well. Among the new problems the production creates include using ten actors to play all of the characters. This requires actors to exit and return as other characters sometimes immediately which proves rather confusing. The elegant dining room setting which remains onstage throughout the play is ideal for the first half of the play when it takes place at the palace of the King. However, when the story shifts to the hut of the Bohemian Shepherd who rescues the lost child (named Perdita), turning over the furniture does not set the right tone or visual impression for a rural cottage. The scenes in which characters narrate time that has passed are quite awkward as the royals that they are describing are sitting right in front of them as listeners with no attempt to disguise them. 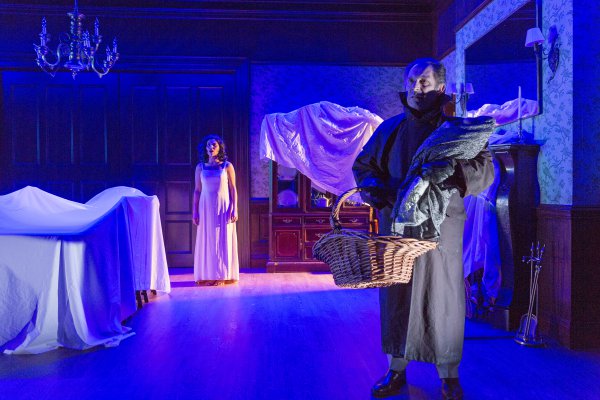 Jolly Abraham and Dominic Cuskern in a scene from “The Winter’s Tale” at the Pearl Theatre (Photo credit: Richard Termine)

While the cast is made up of accomplished actors who have turned in fine work elsewhere, some of the acting here is uneven. Peter Francis James is excellent as the jealous Leontes but once his rage has subsided, he becomes a cipher. On the other hand, Jolly Abraham’s Hermione is charming, regal and persuasive as the unfairly accused queen. Rachel Botchan’s Paulina is impassioned but she is too much the same throughout. Corey Whelihan, subbing for Pearl’s resident acting company member Bradford Cover who usually plays Polixenes, was rather bland as this royal. Tom Nelis makes a fine upright courtier as Camillo, eventually adviser to both kings.

Among the comic characters, Steve Cuiffo is a delightful rogue as Autolycus, traveling salesman, troubadour and pickpocket. Dominic Cuskern makes his noble Lord Antigonus (famed for the stage direction “Exit pursued by a bear”) and the lowly rural Shepherd entirely different characters. Adam Green is amusing as the Shepherd’s son called “Clown” in the play and acting suitably for his name. Playing three characters (the young son of Hermione, a courtier to King Leontes, and King Polixenes’  twenty something son who has found true love), James Udom was best as the lovelorn royal Florizel, a little too old for the child Mamillius. Ismani Jade Powers, who appears as a courtier in the first half of the play, made a lovely and level-headed Perdita, the 16-year-old lost daughter of Leontes and Hermione.

Banakis’ stylish and classy dining room setting with its chandelier, piano, mahogany furniture and china closet made a fine opening picture for the court of King Leontes finishing their coffee and brandy after a dinner party. It worked less well for the sets required in the second half of the play. There was no such problem with the contemporary clothing by Grimes which seemed entirely appropriate to the director’s modern approach. Bradley King’s lighting was particularly effective for the storm scene in which Antigonus abandons Hermione’s child and the recognition scene which ends the play with a magical coup de theatre.

Michael Sexton’s revival of Shakespeare’s The Winter’s Tale makes marvelous use of its modern update which seems entirely appropriate to this strange story. While it creates new problems not generally associated with this play, The Pearl Theatre production is an overall fine introduction to this rarely seen play.

The Pearl Theatre Company in association with The Shakespeare Society