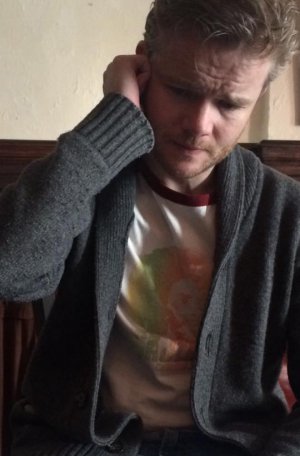 Patrick Brian Scherrer in a scene from “One Way to Pluto!” (Photo credit: Amanda Martin)

“Everyone wants to die until they find out they’re going to,” observes Sean, the 60-year-old magnanimous landlord of a Lower Side tenement.  He has to evict Peter, a heroin addicted, small-time out of work rock drummer in his late 20’s. Peter is on a downward spiral and hasn’t paid the $1100 per month rent for his disheveled studio apartment with the bathroom in the hall in four months.  Seanie Sugrue’s jagged and engaging play One Way To Pluto! presents his harrowing odyssey at times with dark humor.

Most of the first act is a series of scenes where we meet a female escort Peter picked up at “hipster bar on the Upper East Side,” his contentious band mate and his weary mother in Woodside, Queens.  Peter’s drug addiction is depicted graphically and there are eerie dream sequences.  Later, and for much of the second act, the action shifts to Strawberry Fields in Central Park where there’s a Waiting For Godot tone as Peter befriends an eccentric and wise vagrant who has been sleeping there for 30 years since the era of AIDS.

Patrick Brian Scherrer plays Peter, appearing in all 11 scenes, often in intense situations.  The very personable Mr. Scherrer’s performance is quite heroic as he boldly embraces the play’s many painful episodes with his boyish charm.  He is painfully believable as this wide-eyed struggling artist in the cruel big city and is instrumental to the play’s success.

As the Irish accented Sean, Myles O’Connor wonderfully conveys the character’s wisdom and poignantly details his own troubled past with graceful humanity.  John Warren is gleefully commanding as Dwight, the perceptive hobo.  Peter Halpin is forcefully comic as the fake British guitarist Johnny.

Irish-born author Seanie Sugrue has crafted an engrossing contemporary fable.  Mr. Sugrue’s dialogue is witty and realistic and there are numerous funny one-liners.  A hilarious scene of a mugging gone awry recalls the work of Neil Simon at the height of his powers.   Some of the wistful ruminations and explosive romantic exchanges between the men and women are reminiscent of John Patrick Shanley. 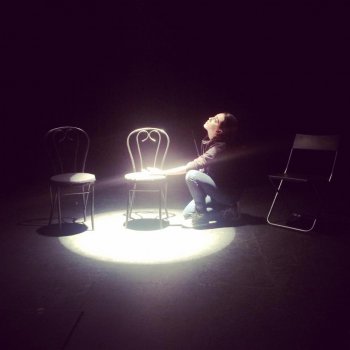 Patrick Brian Scherrer in a scene from “One Way to Pluto!” (Photo credit: Amanda Martin)

Running two and a half hours with an intermission, One Way To Pluto! drags at times as it is so crammed with incidents and observations.  Mr. Sugrue has also solidly directed the play with theatrical flourishes including characters entering and exiting through the audience and at one point interacting with audience members.  There are minimal props, little scenery and some furniture on the black stage of the theater.

In addition to playing the leading role, Scherrer is also the technical director and his work on this front is equally as accomplished.  The lighting and sound design add the desired frenetic quality and enhances the dimensions of fantasy and reality of the piece.

Adding visceral authenticity to the show is the use of music during the scene changes.  It is mostly made up of loud-portions of songs by an actual East Village band, Acquiesce, who sound appealingly alternative and perfectly complement the play’s actions and tones.  There’s also a song by the Florida punk band Against Me! that fits right in.

“Art should comfort the disturbed and disturb the comfortable” is a quote by the artist Banksy, and is from the mission statement of At Locked In The Attic Productions, the theater company presenting One Way To Pluto!  With this production they have amply succeeded at that. They have also have put forth a work that lovingly blends nostalgia for the bohemian creative past of New York City with the harsh reality of its present environment.

At Locked In The Attic Productions

The odyssey of a heroin addicted rock drummer in contemporary NYC is presented in this jagged and engaging panorama peopled with colorful characters.