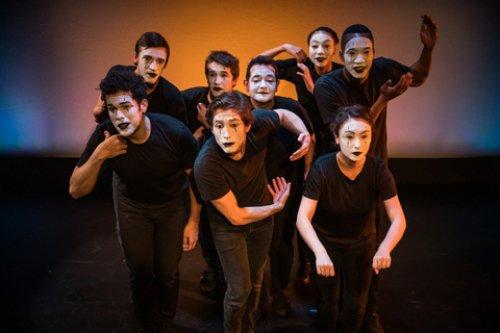 Broken Box Mime Theater’s SKIN is a collection of short plays loosely centered around its one-word title. The pieces run the gamut in terms of subject matter, approach and tone. Or course, many theatergoers may have an implicit bias against the very idea of mime. This is understandable if unfair. Mime has long been viewed by many, in the U.S. anyway, as little more than pretentious preening and outsized gesturing by grimacing folks in clown makeup. More often than not, it’s seen as a joke. But this show has a fun, cool, buoyant vibe that reminds audiences that the genre needn’t be just a punchline, but something that can actually pack a punch.

The program has been “led” by the company’s artistic director, Becky Baumwoll (who also is part of the cast), but it’s clearly been created collectively. The show unfolds on a stage that’s mostly bare, but occasionally contains basic furnishings for sitting, standing, or sprawling. Nine performers dressed in dark T-shirts and jeans, and, yes, with those white-makeup “masks” featured in traditional European mime, present an array of stories. Some are whimsical, some deal with such serious contemporary themes as sexual consent and toxic masculinity, and some are more abstract. All are imaginative and presented with panache.

Despite the prodigious talent of the performers, it’s not always a snap to pick up the visual cues that make the stories clear. Worse, as you’re trying to figure out exactly what’s happening, you may wind up missing ensuing cues that continue to advance the narrative. And then you’re lost. The printed programs for the evening include brief paragraphs describing each of the playlets. These give hints about content and characters but don’t give away too much. It’s a good idea to have a look at them while you’re waiting for the show to begin. 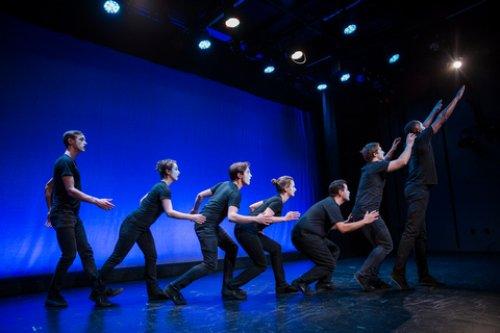 Sometimes the titles alone—projected on the screen before each piece begins—can give spectators all they need to know. “The 16th Annual Brooklyn Beard Awards,” for instance, speaks for itself. What’s impressive is seeing just how much can be done with 18 hands and 90 fingers/thumbs to bring those champion beards to life.

Coherence among the sketches is established by various means. “[UNTITLED]”—about a sculptor’s shifting plans for a big slab of marble—rolls out in segments interspersed throughout the program. Similarly, “Lake,” about a group of friends arriving for a party at a waterfront locale, serves as prologue to the finale, “Skin,” in which one shy participant faces the prospect of cliff-diving and skinny-dipping. (Just to clarify: the title notwithstanding, there is no nudity in this sketch or in any of the others.)

One of the most thoughtful and effective pieces is “Variable,” which presents variations on the same basic scenario—a dinner date in a restaurant—with different characters rotating into four slots. Another highlight is “Sunday,” about a couple sharing intimacy on a couch. Here the action stretches out of mime territory and into the realm of dance. 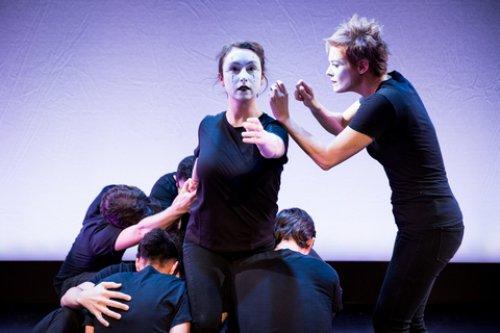 Jamie Roderick’s lighting design is an important factor in bringing the various stories to life. The upstage scrim serves as screen for projected titles and helps change the mood through bold color shifts. The work of sound designer Nick Abeel (also a performer in the show) is likewise vital. Much of the recorded music is original, and some was written specifically for SKIN. Some of it consists of humming or other nonverbal vocalizing. This seems the perfect accompaniment for mime storytelling: music that’s created by human larynxes but without human speech.

The humans in the show, by the way, are of various shapes and sizes, which adds to the accessibility factor. SKIN helps banish the notion that only the lithe and willowy among us can move gracefully and assuredly.

In sum, if you’re a fan of mime—or if you’re not but would like to overcome your misgivings about it—you might do well to give SKIN a chance.