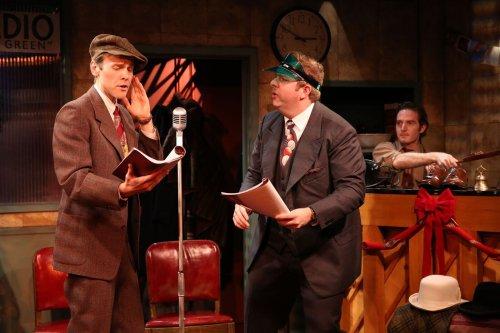 Aaron Gaines as George Bailey and Dewey Caddell as the Angel Clarence in a scene from “It’s a Wonderful Life” (Photo credit: Carol Rosegg)

Does any film director better define or describe the All-American spirit than Frank Capra? And does any other of Frank Capra’s films better describe the All-American spirit than his Christmas movie It’s a Wonderful Life? Capra’s It’s a Wonderful Life is now an unusual stage play, presented as it first was a couple years ago at the Irish Rep as if it were a live radio play.

Keep your eyes–and your ears–on the many sound-effect props, including wind machines, automobile horns, and organ music–not to mention different shoes for clomping and doors for creaking and opening and closing. (This may be the first time that two different people are credited with the sound design, Zach Williamson and Walter Tillman.)

As adapted for the stage by Anthony E. Palermo, it’s roughly half the length of the film. But it still tells the same story about George Bailey, who on Christmas Eve in 1946 intends to take his life, only to be saved by an angel named Clarence. While saying there’s “a Tom Sawyer quality to you, George,” Clarence still turns George around by showing him what “a different world” it is without him, as if he had never been born. And it seems to be amazingly complete–even while the focus of the presentation is on the live radio version, including a banner that says, W.I.R.T. (duh, for Irish Repertory Theatre) and several different “words from our sponsors,” such as “Lucky Strike” (“clears your lungs”) and “Carter’s Liver Pills.” 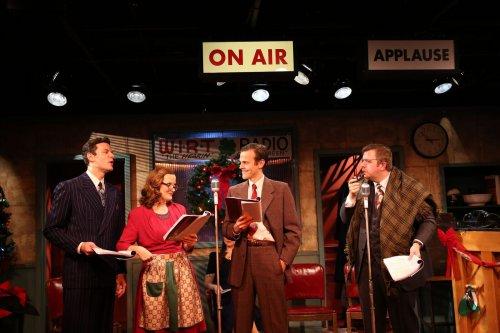 Both with the design and the presentation, there’s also a certain and appropriate focus on Christmas. While we’re assembling in the tiny, downstairs theater at the Irish Repertory Theatre, for instance, familiar Bing Crosby Christmas carols are playing: “Winter Wonderland,” “Have Yourself a Merry Little Christmas….” Then the cast gradually arrives on the single set–a radio studio, with Christmas decorations–and removes their winter clothing to prepare for the “broadcast” of the show. One of the actresses is late, we’re told, because she “was at the opening of Brigadoon last night.”

As if it were happening back in 1946, the period details of the perfect costumes (by Barbara Bell) and the diminutive but effective set (by James Morgan) infuse the evening with an old-fashioned Christmas-y feeling. As George, Aaron Gaines is reminiscent of James Stewart, while the rest of the six-member-cast play multiple characters–with different voices and mannerisms. Dewey Caddell is the sweet-natured Clarence and the villainous Mr. Potter, who’s all bluster–as well as “Pop Bailey” and the druggist, Mr. Gower, for whom the young George works. And as directed with dispatch and precision by Charlotte Moore, the remaining cast members including Haley Bond, Ian Holcomb, Orlagh Cassidy and Rory Duffy bring the many other residents of Bedford Falls to life.

It’s a lovely way to re-experience the story of the film while having a meta-theatrical experience at the same time.