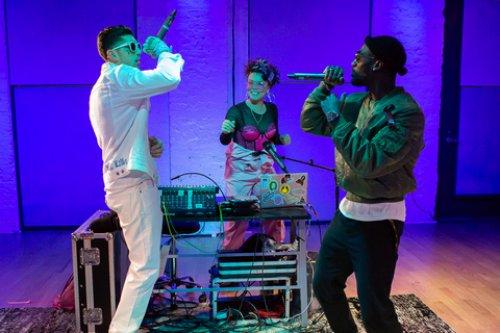 “Hip hop gave me my name” says Peep One, a captivating young mixed race woman who is a beat maker; the one who crafts the tune for a hip hop song. This is one of numerous pertinent details imparted in playwright Idris Goodwin’s exhilarating drama Hype Man: a break beat play. Mr. Goodwin’s vision is theatrical, his dialogue is sharp, and he crafts a clenching scenario.  The title refers to the backup rapper who supports the star rapper by chiming in with his own declarations and stirring up the audience.

While totally contemporary and focused on the rap artform, Mr. Goodwin’s accomplished work is rooted in old-time show business lore. Anyone who is familiar with the sagas of legendary bands such as The Beatles, The Rolling Stones, The Who, or The Police will recognize the complex tensions dramatized here between members of a band, particularly those of the front man, the songwriter and its collaborators.

Pinnacle is an established white rapper and songwriter in his early 30’s from a dysfunctional background who is on the verge of major success. Verb is his African-American best friend since they were in high school and is his hype man. They’ve been performing together for eight years and Peep One has been with them for a year and a half. It’s 2015 and they’re about to leave their unnamed city for New York to appear on The Tonight Show which will likely lead to prominence. Shortly before, a young black man has been shot and killed by the police. Verb is adamant they use their national exposure to support Black Lives Matter while Pinnacle believes it’s wise to stay out of it. The play vigorously charts the course of these repercussions in 75 charged minutes. 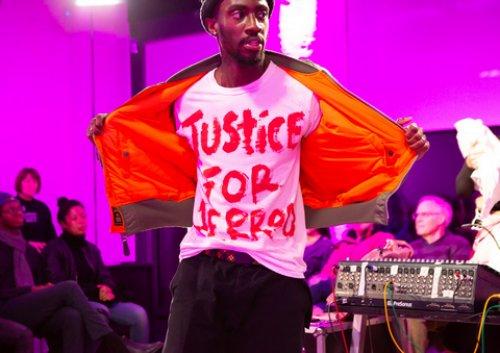 Shakur Tolliver in a scene from “Hype Man: a break beat play” at The Flea Theater (Photo credit: Hunter Canning)

The theater’s four-sided contained playing area is surrounded by two rows of seats on each and the audience is close up to scenic designer Anton Volovsek’s neat set that represents a recording rehearsal room with a console, microphones and a plush chair. It also swiftly serves as other locations when the chair is pushed out.

Co-directors Kristan Seemel and Niegel Smith’s energized staging featuring members of The Bats, The Flea’s resident company, has the actors in motion all over the space, even at one point cleverly on view through windows suggesting another place outside. There’s a gorgeously presented number with them performing a terrific rap composition. Also, the intensity of their performances are magnified by close proximity.

Lean, sinewy, tattooed and fierce, the fiery Matt Stango is ideal as Pinnacle. Mr. Stango’s soft spoken voice erupts in fury as he conveys the anguish of a survivor who has triumphed over adversity through talent and sheer force of will with his low-key charisma. Visually and vocally Stango is utterly convincing as this popstar. 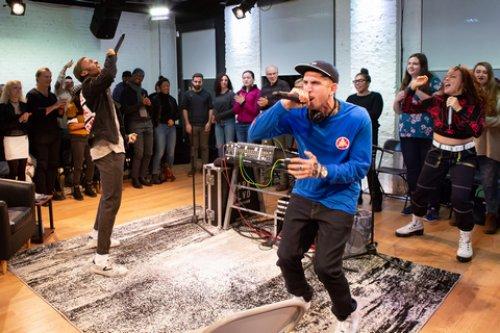 With his mellow presence and beaming smile, Shakur Tolliver beautifully plays Verb. Mr. Tolliver forcefully enacts the character’s redemptive journey from seeking creative fulfillment to idealistic militancy. Tolliver and Stango’s interactions have the dimension of wrestlers in the ring, adding tremendous sparks to their combative feuding.

When the audience arrives, the magnetic Tay Bass is at the console joyously cooking up vibrant beats during a 10-minute pre-show where she also does some euphoric dance moves. Ms. Bass later appears as Peep One and is equally as riveting as she poignantly portrays this spirited adoptee who yearns for artistic recognition. Bass, Tolliver and Stango are majestic together.

The Flea Theater featuring The Bats