Kurt Vonnegut fans and enthusiasts of extremely broad acting will be thrilled by this revival of his absurdist 1970 play Happy Birthday, Wanda June. It’s rarely, if ever performed and this excellent production from Wheelhouse Theater Company demonstrates why.

War, guns, Vietnam, the excesses of capitalism, toxic masculinity, blind American patriotism and feminism are among the targets of Mr. Vonnegut’s characteristically overloaded satire. Such concerns treated in a mannered fashion were all fodder for his popular novels but for the stage it’s problematic.

Exuberant dialogue matched with a 1960’s biting sensibility, a familiar plot and Shavian speechifying adds up to a patchy and long-winded experience. The characters come across as philosophical mouthpieces rather than real people. There’s a strained tirade laden with profanity and racial slurs.  Vonnegut’s penchant for funny names is delightfully evident.

Millionaire big game hunter and male chauvinistic brute, the four-time married Harold Ryan has been missing in the Amazon rainforest for eight years. His most recent wife, the former carhop Penelope has had him declared legally dead. She now plans to marry her effete, violin-playing neighbor Dr. Norbert Woodly which upsets her temperamental 12-year-old son Paul. Vacuum cleaner magnate Herb Shuttle is also put out as he has feelings for her. Everything crashes down when Harold, accompanied by his best friend Looseleaf Harper, a former U.S. Air Force colonel who dropped the atomic bomb on Nagasaki, unexpectedly returns home to 73rd Street and Park Avenue. 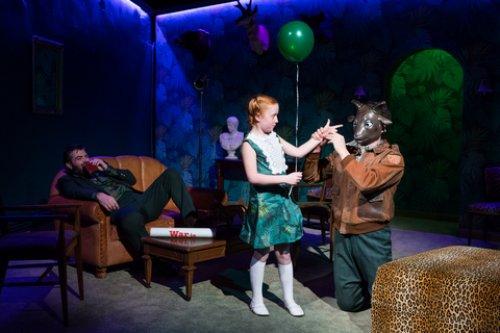 Interspersed are fantasy sequences such as a W.W. II flashback with goose-stepping Nazis and a vicious German commandant. A haunting standout is the heavenly asides narrated by a young girl (surrounded by the cast in animal masks representing dead pets) who was killed by an ice cream truck. Lighting designer Drew Florida achieves a surrealistic tone with his expertly dreamy hues. Along the way, the play’s non-sequitur title is explained.

A running gag of doorbell chimes being the rumbling growls of lions and hyenas are typical of sound designer Mark Van Hare’s witty contributions.

Scenic designer Brittany Vasta’s gorgeous unit set of the Ryan living room is a dazzling feature of the production. Forest green with leaf-patterned walls adorned with taxidermy animal heads, a chandelier with antlers, elegant bric-a-brac and period furniture are an entrancing landscape to marvel at as the verbosity goes on.

Christopher Metzger’s bold costume design perfectly evokes the look of circa 1970 with its loopy fashion sense abundant with animal prints, leather and brown, all adding to the visual splendor. 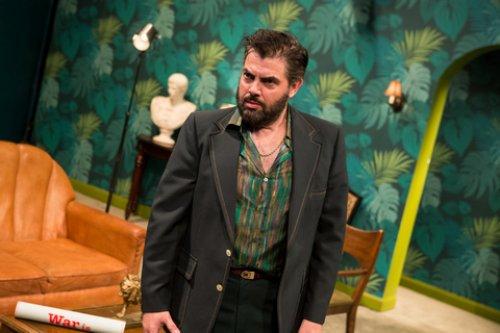 Director Jeff Wise’s command of stagecraft that includes wild tableaus injects the production with much needed momentum and he obtains strong yet sensitive performances from the committed cast who are in the high decibel range.

With the pugnacious bluster of the inebriated Norman Mailer and the mania of Robin Williams, the bearded and hulking Jason O’Connell is totally on as Harold Ryan. Mr. O’Connell goes overboard with physical and vocal shtick but arguably and admirably it’s the only way such an exaggerated role could be played for impact.

Kate MacCluggage’s wonderful patrician hauteur as Penelope becomes even more comical when we find out she was a waitress. Ms. MacCluggage creates a richly fleshed-out characterization despite all of the antics around her.

Child performer Charlotte Wise’s periodic appearances as Wanda June are eerie yet humorous due to her captivating presence. Ms. Wise’s mesmerizing performance is a highlight of the show. 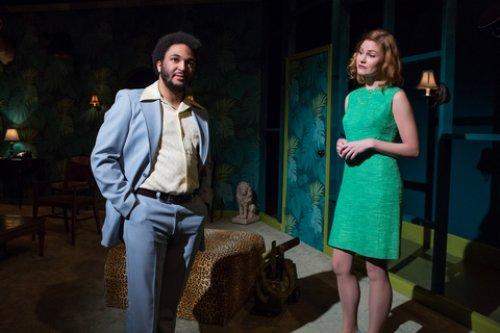 This was the age of Hair on Broadway and edgy screen comedies such as Where’s Poppa?, A New Leaf and Harold and Maude that all championed nonconformity.  Vonnegut wrote the screenplay for the 1971 film adaptation that was directed by Mark Robson and starred Rod Steiger as Harold Ryan, Susannah York as Penelope, with other parts played by George Grizzard, Don Murray, and William Hickey recreating his stage role of Looseleaf Harper.

The laudable Wheelhouse Theater Company has exhumed this curio perhaps because it might resonate during the epoch of Donald Trump. Their sterling presentation reveals it to be a piece of its time with little theatrical weight that does faithfully convey the sly spirit of Kurt Vonnegut.