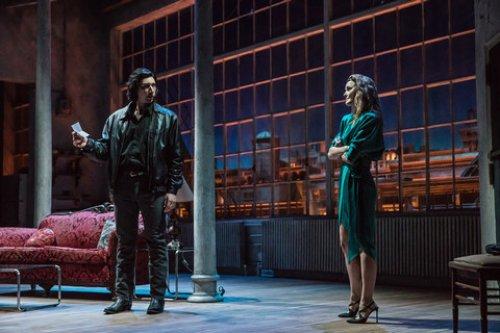 Adam Driver and Keri Russell in a scene from the revival of Lanford Wilson’s “Burn This” at the Hudson Theatre (Photo credit: Matthew Murphy)

The original production of Lanford Wilson’s Burn This offered a play that was as stunning as the performance, delivered by John Malkovitch and Joan Allen, who won the Tony Award for Best Actress. If subsequent productions have revealed weaknesses in Wilson’s conception, the current revival at Broadway’s Hudson Theatre is no exception. (A 2002 revival featured Ed Norton and Catherine Keener.)

For one thing, it takes far too long for Pale, Wilson’s most outrageous and flamboyant creation, to arrive on the scene. (Malkovitch was Pale in the original production and Adam Driver is Pale now, with different but equally effective results.) For another, the premise of the play requires Anna to be overly reserved and subdued, in contrast with Pale’s constantly explosive character. The customarily sure-fire director Michael Mayer somehow seems to have accentuated those problems with lethargic consequences.

The title is uttered at least twice during the course of the play itself, with numerous other references to fires, flames, and burning. The most obvious if buried reference suggests that this incendiary work self-destructs even as it unfolds–and in a sense, it does.

Pale, a New Jersey restaurant manager, is in a sense always on fire. He even says, at one point, that his “normal temperature is about 110,” and at another, that he’s “got like a toaster oven” inside of him. His combustible nature demands attention and consumes everyone else around him, making Pale an irresistible role for any actor of means. And he has met his match in the always lurching, lunging and huge Driver. Even before Pale appears on stage, in the second of seven scenes, his loud pounding on the door–at 5:30 in the morning, no less–announces his fiery nature. 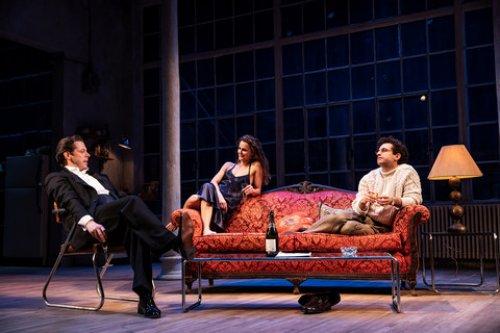 David Furr, Keri Russell and Brandon Uranowitz in a scene from the revival of Lanford Wilson’s “Burn This” at the Hudson Theatre (Photo credit: Matthew Murphy)

Like the richest of characters, Pale is also riddled with contradictions, however. This bull, who turns any environment he’s in into a china shop, is also fastidious about wrinkling his suit. He’s also fetching when he emerges from the offstage bedroom wearing his paramour’s pastel-colored kimono. (The appropriate costumes have been designed by Clint Ramos.) This lummox of a man also breaks down, falling to the floor and sobbing at various points. And in contrast with all his references to how hot he is, Pale says, “I put out fires.” He rather creates some during the course of the play. As Anna eventually says to him, “I don’t like you and I’m frightened of you.”

In the play’s opening, a pensive Anna (Keri Russell) is crouched on the floor and smoking a cigarette when the buzzer rings, and her beau, Burton (David Furr) enters, fresh from a trip to Canada. As we quickly learn, it’s Anna’s first cigarette since college, following the funeral of her one-time protégé and roommate, Robbie, who was, like herself, a dancer. And if Pale is Robbie’s older brother, what might also be deemed a flaw in Wilson’s premise is that he should even be grieving his brother’s demise, seeing as Robbie was 12 years younger and hardly ever saw him. Pale left home before Robbie developed into a person, and he hardly knew anything about him, beyond his being gay.

Though Robbie and his gay lover died in a boating accident, it’s worth mentioning that when Burn This premiered in 1987, it was perceived as a commentary on the AIDS epidemic that was unfortunately at its peak. Anna’s other roommate is Larry, who is also gay and gets to recite Wilson’s wittiest repartee. Brandon Uranowitz brings just the right bitchy attitude and hand gestures to the part.

As Anna, Russell’s gestures and mannerisms seem far too studied and unnatural–she’s not only acting, she’s over-acting, even if her character is almost painfully reserved. And then there’s Driver, who is never less than a force of nature as Pale, whether igniting with grief or confusion or cock-eyed demands. His brewing an actual pot of tea is priceless. 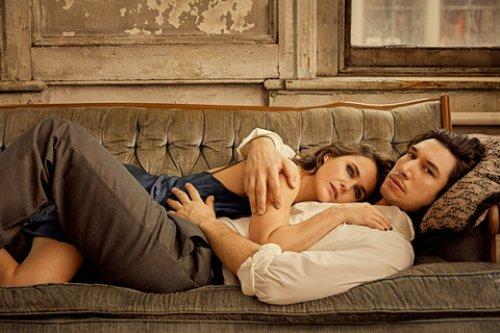 Keri Russell and Adam Driver in a scene from the revival of Lanford Wilson’s “Burn This” at the Hudson Theatre (Photo credit: Danielle Levitt)

Furr is also fine as Burton, a highly successful screenwriter. The fisticuffs and fight scene between Furr and Driver is so convincing, it seems real. (J. Steven White is credited as fight director in the program.)

As designed by Derek McLane, the elongated loft–with a particularly lengthy, old-fashioned radiator–has enormous picture windows, through which we observe the downtown Manhattan skyline, where the play is set. The lighting design by Natasha Katz takes good advantage of that skyline, whether depicting dusk or early morning. The loft also serves as a rehearsal space, where Anna is pursuing her newfound ambitions to become a choreographer, and where Robbie and she regularly danced.

If Burton has the privilege of saying, “Tell the truth and then write, ‘burn this’ on it,” it’s harder to say what kind of truth Wilson is telling, if any. In the final analysis, Burn This does seem to disintegrate, with little left to ponder.