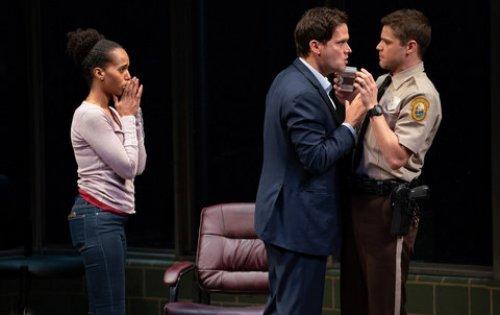 “That’s it?” is likely to be one’s reaction at the conclusion of playwright Christopher Demos-Brown’s tidy topical 90-minute racial drama American Son. Theater enthusiasts often rhapsodize about Broadway’s Golden Age, the 1920’s to the 1960’s, when straight plays filled theaters. Mr. Demos-Brown’s effort does harken back to that era by crafting a well-constructed minor vehicle for actors of the sort that could have played a season, then toured, was made into movie and was forgotten. Kerry Washington and the fine cast make the most of their choice roles under Kenny Leon’s solid direction.

It’s 4:00 AM at a Miami, Florida police station, and Kendra Connor, an African-American psychologist is frantic as she’s tried to report her 18-year-old prep school student son Jamel as missing as he hasn’t been home in the last nine hours. The affable young white Officer Paul Larkin becomes exasperated as he tries to assist her while following police protocol and he imparts the incoming sketchy information that Jamel has been the subject of a police action. Scott Connor, Kendra’s white FBI officer estranged husband, arrives and also causes conflict. They all wait for Lieutenant John Stokes to provide conclusiveness. He turns out to be a seasoned by the book black man. Passions flare as the scenario reaches its underwhelming end.

Did Kendra and Scott raise privileged Jamel to have a realistic sense as what life is like for young black men in the contemporary U.S.? These and other sociological concerns are set forth as they argue.  They also clash with Lieutenant Stokes whose pragmatic sensibility is repellant to them.

Demos-Brown’s biting dialogue, smartly delineated characters, and the propulsive real-time action all have their technical virtues but in totality add up to a mechanical and unsatisfying experience. It’s ultimately a rote exploration of contemporary issues that pushes the right buttons to little impact. 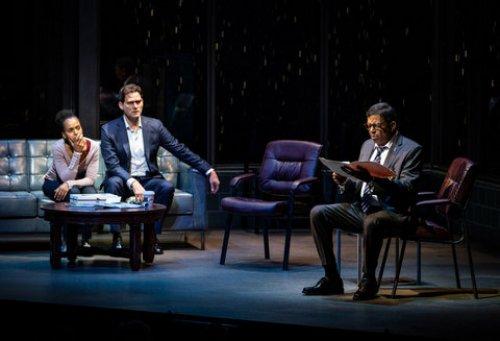 Stealing the show is the mature Eugene Lee as the gruff Lieutenant Stokes, the  AM public affairs
liaison officer. Mr. Lee has appeared in the original 1981 production of A Soldier’s Play, regionally in leading roles in several August Wilson plays, and on television since the 1980’s. With his weathered appearance, searing eyes and mellifluous voice, Mr. Lee’s life-time of performing experience is powerfully evident as he seizes focus while still being part on the ensemble. The enthralling Lee’s folksiness morphs into icy combativeness as the discord amongst him and the Connors intensifies. It’s a supreme display of character acting.

American Son appears to emulate Greek tragedy with its debatably preordained resolution. Such a lofty conceit though doesn’t elevate it above being a decent police procedural with political overtones.