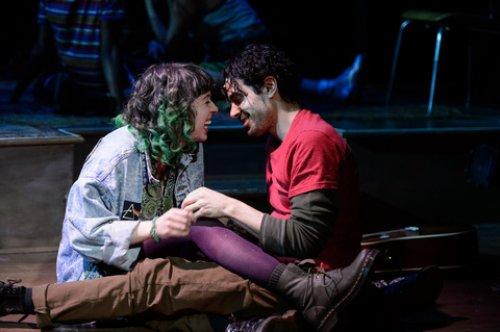 Adina Verson and Damon Daunno in a scene from The Bengsons’ “The Lucky Ones” (Photo credit: Ben Arons Photography)

As revealed in a story in the New York Times, The Lucky Ones is the second of an intended trilogy of autobiographical musicals. If their last musical, Hundred Days focused on the beginning of Abigail and Shaun Bengson’s relationship, The Lucky Ones focuses on Abigail’s adolescence and family, making it something of a prequel. Though the Bengsons have a young son, according to Aibgail–in that same Times story–it was her miscarrying another child that “set us on this path of wanting to write about family and trauma.”

In The Lucky Ones, the trauma comes about when one young friend murders another, even as the murderer is presented as Abigail’s cousin. As Shaun Bengson says early during the show, “This is a true story, even the parts that never happened,” which establishes some confusion right from the start. Consider also, Abigail saying that her school is “in a part of Vermont that happens to be in Maine.”

Things only get more confused since there are so many different stories being told and sung about, in as rapid and rampant a fashion as the music being performed. The score for The Lucky Ones is, in a word, eclectic: from choral and folk to hymnal. (The music and lyrics are by the Bengsons, who also wrote the book with Sarah Gancher.) 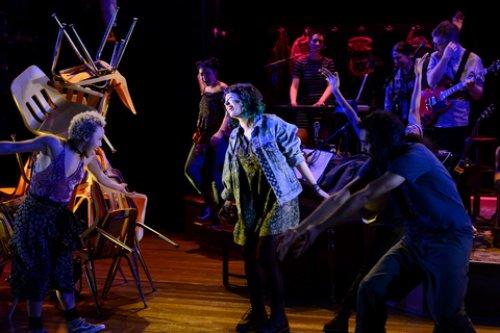 And then there’s the self-consciousness on display throughout the overlong piece, which consists of three parts and one intermission. In a sense, the first story is about the space we’re all situated in: “We are so happy to be here at the Connelly, with all the radiator sounds and the creaky floors,” says Abigail at the top. “I love this room in particular,” adds Shaun, who goes on to explain it “was built as an orphanage by the archdiocese back in 1874.” Abigail also explains that there’s a bowling alley below the theater, and below that are sewers and subway tunnels.

Featuring an electric violin, the first number, or “Invocation,” is called “Star of Your Eye,” and it introduces us to Kai, Abigail’s ostensible cousin, and the young love of Kai’s life, Emma–the new kid in school–whom he eventually murders. Both characters were based on actual classmates of Abigail’s, at the same school where both of her parents and her aunt all worked.

After the first song, “We are in the house where I grew up,” says Abigail, with the bacon and eggs and toast and tea in the morning, on the first day of a new school year. Adding to the confusion are Abigail’s many family members, including her sisters–one of whom is named Emily (Ashley Pérez Flanagan), not to be confused with her new friend Emma (Adina Verson)–her parents, her aunt (the stalwart Maryann Plunkett) and her cousins. Another part of the problem is that there are simply too many people to be contained on the small stage of the Connelly Theater, which may be why the majority of them begin the show in the balcony in the rear of the auditorium. (The Lucky Ones has been directed with an overcrowded zeal by Anne Kauffman.)

We’re also told early on that Abigail’s parents, Tom (Tom Nelis) and Sherrill (Myra Lucretia Taylor), met in a “mental ward,” where her father was visiting a patient and her mother was a nurse, which also conflicts with Sherill’s being a teacher at Abigail’s school, later. 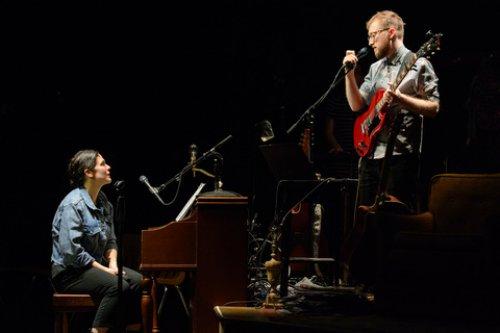 Abigail Bengson and Shaun Bengson in a scene from their new musical, “The Lucky Ones” (Photo credit: Ben Arons Photography)

While the already bursting stage has to accommodate a large stack of chairs–meant to represent a bonfire at school—at the performance under review, one of the chairs fell into the auditorium and nearly on top of some theatergoers in the front row, Abigail stepped outside of character to say, “At this point in my life, we’re precarious.”

Near the end of Part I, an “Angel” that Kai interacts with becomes more of a presence. (He’s portrayed by Zach McNally.) The second part, called “The Storm,” has a lot more narrative and fewer songs than the first part. It begins at school, where Sherrill is telling the assembled students that Kai is “very sick and he needs to be in a hospital”–and that Emma has died. Abigail adds that Sherrill also told the upper school that Kai was in jail, and “maybe even said that Kai had killed Emma.” But even if the focus seems, from the beginning, to be on Abigail and Shaun, the principle narrators, by the end it seems to be more on Kai and Emma.

With his strong voice and winning ways, Damon Daunno stands out as Kai. Sonya Tayeh’s versatile choreography keeps the eighteen players on stage swirling and twirling with nimble dispatch. But the Ars Nova production is even busier, louder and swifter than their biggest hit to date, Natasha, Pierre & the Great Comet of 1812, which is saying a lot.