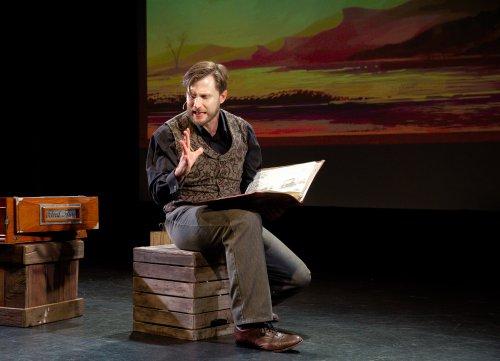 Joyously presented and based on real people, Georama: An American Panorama Told on Three Miles of Canvas, is a spirited musical that tackles the age-old conflict of art versus commerce.

Born in New York, John Banvard (1815-1891) was an artist who traveled around The United States, and became well known for his panoramas, particularly of the Mississippi River valley.  These canvasses could be 12 feet high and 1300 feet long.  Mr. Banvard developed a crank apparatus that gave the sense of movement as the artworks were unspooled before audiences on riverboats and theaters.  These viewings were accompanied by live music and were very popular entertainment, known as “Georamas” as he called them.

He toured Europe, and the world with these extravaganzas.  After building an elaborate museum on Long Island, to compete with P.T. Barnum’s attractions, he went bankrupt and died in obscurity.

Book writers West Hyler and Matt Schatz have taken these facts and woven a charming piece of Americana that explores idealism coming up against cynicism. It’s very well structured, amusing and thoughtful. There are a few zingers that could be interpreted as referring to President Trump.  Their chief conceit is having Banvard’s early associate Taylor, later become Barnum, and their rivalry becomes a focal point of the show. 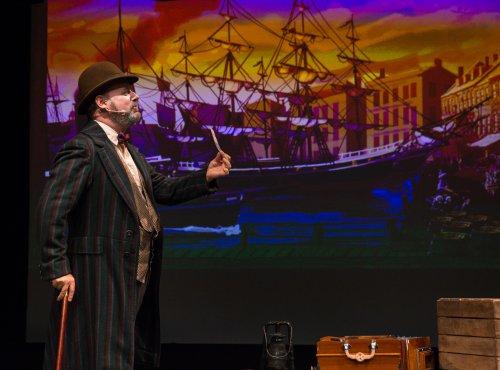 Bearded, athletic and soulful, P.J. Griffith is commanding as John Banvard.  With his leading man looks and soaring voice, Mr. Griffith is the centerpiece of the show.

“Where has this guy been?” is the reaction to experiencing Randy Blair’s stupendous performance as Barnum.  The portly Mr. Blair resembles the young Victor Buono, and breathtakingly dances, cavorts, sings and cracks wise with infectious glee.  Blair gives us the portrait of that legendary huckster we all expect, especially when wearing a top hat and a red velvet waistcoat.

Daffy and lovely, the warm Jillian Louis is captivating as Elizabeth Goodnow, the musician who becomes Banvard’s wife.

Whether hilariously playing Queen Victoria, a sympathetic pastor or a pragmatic businessman, Nick Sullivan brings depth and humor to these and other multiple roles.

Jacob Yates and Ana Marcu are the onstage musicians skillfully playing piano, cello, violin and guitar. They also appear as characters in the show, often with deadpan effectiveness.

As befitting such a small-scale production, Mr. Hyler’s staging is straightforward but inspired.  The set is relatively bare, having just tables, chairs and musical instruments. 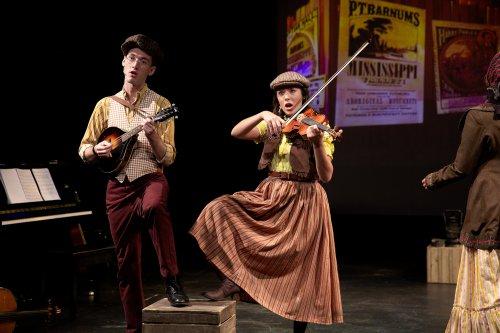 The back wall is a large screen on which Jason H. Thompson’s gorgeous projection design replicates Banvard’s idealized scenic paintings. The sense of movement is artfully simulated, giving the sense of what such a presentation was like in the 1840’s.

Lighting designer Ann G. Wrightson provides a perfect accompaniment of varying brightness that emits the look of the past and accentuates the actions.

Georama: An American Panorama Told on Three Miles of Canvas is presented as part of the 2017 New York Musical Festival. This annual event showcases a wide selection of emerging works that are given small-scale productions as a testing ground for the future.

With higher production values and a larger ensemble, it could certainly  be a full-fledged and entertaining musical of scope.