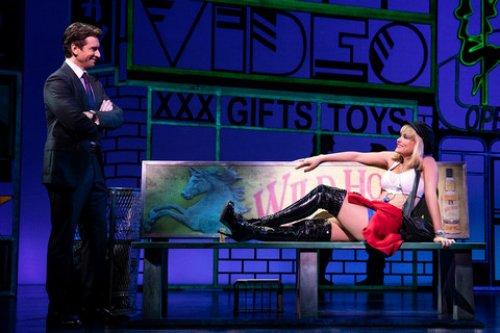 Andy Karl as Edward and Samantha Barks as Vivian in a scene from “Pretty Woman: The Musical” (Photo credit: Matthew Murphy)

Diligently faithful to the classic 1990 film, Pretty Woman: The Musical is a lackluster stage treatment that is dull from start to finish. Letters of the Hollywood sign framed by palm trees adorn the drab stage curtain. The routine introductory opening number, “Welcome to Hollywood” features the unsavory denizens of downtown Los Angeles carrying on. David Rockwell’s minimalist scenic design initially consists of neon-themed flats connoting strip clubs and seedy apartment buildings with lit up palm trees that are wheeled around. It’s equally visually underwhelming when the presentation shifts to the Beverly Wilshire Hotel, Rodeo Drive and a country club.

Bryan Adams and Jim Vallance’s pop score is a bland compendium of long-winded ballads, mediocre production numbers and wan character songs. There are some soaring melodies but the lyrics are uninspired and it all makes no impact. Roy Orbison’s “Pretty Woman” is not to be heard.

The book by the film’s deceased director Garry Marshall (1934-2016) and its original  screenwriter J. F. Lawton is a leaden reinvention of the material as a Broadway musical. Most of the intended jokes pass by in silence.

Apart from a snappy ballroom dancing sequence, Jerry Mitchell’s choreography is more rote than exhilarating. Mr. Mitchell’s direction gets the show on its feet and does little else. It is strongly indicated through physical placement of the leading characters that sex will take place in two instances. The female puts a pillow on the floor for her knees suggesting oral will transpire and later on for intercourse she’s on a piano with her legs spread and the man is front of her. The inevitable blackouts couldn’t come soon enough. Absent the verve of Bob Fosse these bits are more awkward than erotic. When they’re at the opera to see La Traviata, they’re in an opera box that moves around the stage as singers glide about performing arias. It’s meant to be dazzling but just peters out. 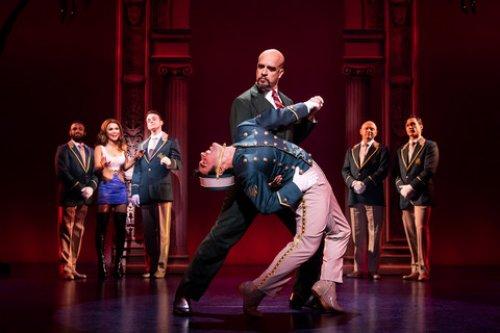 Eric Anderson as Mr. Thompson, Tommy Bracco as Giulio and company in a scene from “Pretty Woman: The Musical” (Photo credit: Matthew Murphy)

In the 1980’s the steely, arrogant and handsome corporate raider Edward Lewis has arrived to orchestrate the hostile takeover of a faltering ship building company. His business tycoon father died a month previously and his girlfriend recently broke up with him so he’s even more emotionally distant.

In one of the great meet cutes, Edward encounters the Georgia-born, high school dropout and gorgeous young streetwalker Vivian Ward on Hollywood Boulevard. After playfully haggling over the cost of giving him directions to the Beverly Wilshire Hotel, she agrees to direct him there. He then decides to buy her services for the whole night and the next day proposes over a breakfast, to pay her for the next six days so she can accompany him to business functions as his date. She becomes enmeshed in the boardroom intrigue and clashes with the odious Stuckey, Edward’s long-time lawyer, and Edward and Stuckey have a falling out. Will Edward and Vivian find happiness together in this West Coast take on Pygmalion?

Julia Roberts was 22 years old when she played Vivian in the movie and her star quality shone forth, winning the Golden Globe Award for Best Actress – Motion Picture Comedy or Musical and an Oscar nomination as Best Actress. Portraying Edward was 40-year-old Richard Gere who was on his leading man streak. Their magical chemistry propelled this Cinderella story to a world-wide box office gross of close to $500 million. Here, we get two fine performers offering solid characterizations without much heat.

Making her Broadway debut as Vivian, the British 27-year-old Samantha Barks has a lovely presence and a powerful singing voice. Though, with her hard-edged mien as a prostitute she comes across as more of a seasoned professional rather than a dewy novice. 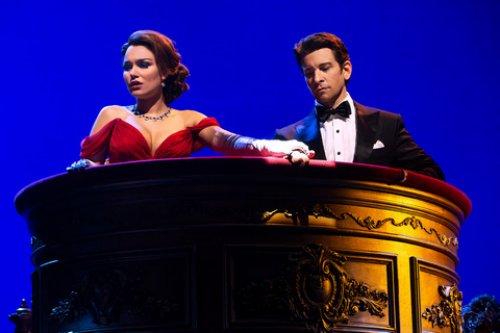 Samantha Barks as Vivian and Andy Karl as Edward in a scene from “Pretty Woman: The Musical” (Photo credit: Matthew Murphy)

With Tony nominations for Rocky, On the Twentieth Century and Groundhog Day, 44-year-old Andy Karl’s charisma and considerable talents have been well demonstrated. In Pretty Woman: The Musical as the aloof Edward, Mr. Karl exhibits what magnetism he can in this detached role while being saddled with some dreary songs. Karl and Ms. Banks admirably soldier on together in a losing battle.

Stealing the show is the delightfully animated Eric Anderson as Mr. Thompson (the Hector Elizondo part), the autocratic but benevolent hotel manager. Mr. Anderson is hilarious and touching as he oversees many of the events, singing and dancing with infectious panache. Anderson is also impressive as Happy Man, a roving narrator figure during the show’s walk on the wild side portions.

With big blonde hair, a biker jacket and leather stiletto boots, the vivacious Orfeh is wonderfully feisty as Kit Du Luca, an older prostitute who has taken Vivian under her wing. Jason Danieley brings as much pizazz as he can to the stridently villainous Stuckey in his brief turns.

The large company of supporting performers and ensemble members has some bright individual moments and their group appearances are polished. 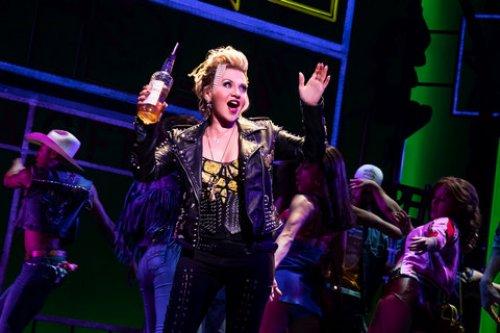 Orfeh as Kit De Luca and company in a scene from “Pretty Woman: The Musical” (Photo credit: Matthew Murphy)

Thoroughly adequate and lacking sparks on all levels, Pretty Woman: The Musical is a drag.