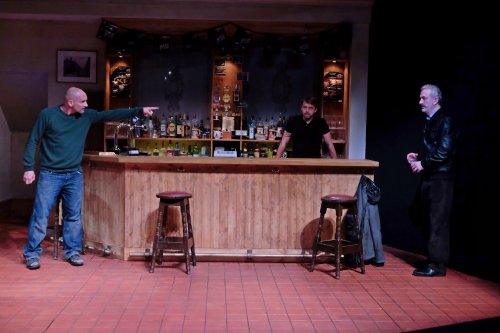 The award-winning, Northern Ireland-born playwright Owen McCafferty’s stilted 75-minute political drama Quietly takes place in a Belfast pub in 2009.  52-year-old Ian arrives there to meet with the 52-year-old Jimmy to make amends for throwing the bomb that killed Jimmy’s father along with five other men 36 years earlier.  The repercussions of this dreadful act that occurred when they were each 16, on them and the Northern Ireland Protestant and Catholic conflict, are explored in the course of a fitfully compelling grim play.

Mr. McCafferty skillfully delineates his characters and has crafted a dramatic situation that though is specific has a universal quality.   The dialogue has authenticity and the play is solidly structured.  By its nature it does fall into the familiar pattern of the wronged clashing with the instigator of his misfortune.

“The characters in this play both the living and the dead are completely fictional.”  This statement explains the play’s overall contrived quality.  Both of the lead characters have such striking similarities that at times they come across as mouthpieces academically articulating “The Troubles,” the 30-year war in Northern Ireland between The British and Catholic natives that ended in 1998.

McCafferty cleverly adds a third character, a wry Polish immigrant bartender and has a soccer game on television that’s a welcome object of banter.  Thankfully the production has accomplished actors in it that elevate the script. Initially their strong and no doubt accurate national accents are a bit thick to fully comprehend but they all eventually achieve clarity.

Wiry, shaven-headed and magnetic Patrick O’Kane is commanding as Jimmy.  Veering from jocular to intense, Mr. O’Kane burrows into the core of this lost soul and delivers a powerful performance.  O’Kane is heartbreaking when describing the trajectory of this character’s tragic fate and inability to successfully cope with it.

Robert Zawadzki as Robert the bartender winningly combines comic relief and depth with his charming low-key presence.  Mr. Zawadzki’s delivery is precise and he sensationally reacts and steps back into silence when required. 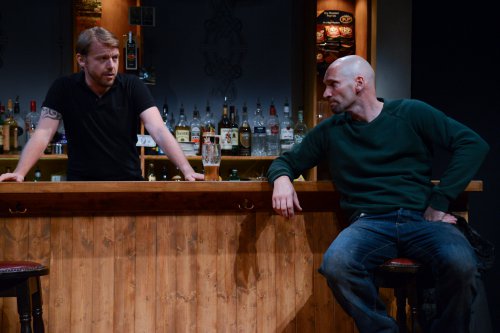 Robert Zawadzki and Patrick O’Kane in the Abbey Theatre’s production of “Quietly” at the Irish Rep (Photo credit: James Higgins)

Director Jimmy Fay has staged this small-scale work that’s essentially a series of interactive monologues with technical flair.  There is as much integrated movement as possible by the cast.  Donal O’Farrell’s fight direction has several exciting sequences.

The Abbey Theatre presented the premiere of Quietly in 2012.  It was then performed at Edinburgh Festival Fringe 2013 and in London in 2014 at the Soho Theatre.  The Irish Repertory Theatre presents this U.S. premiere in association with The Public Theater.

Quietly is a theater piece that’s well rendered but is characterized by being overly schematic and doesn’t quite soar to the profound heights it aspires to.

Presented by the Irish Repertory in association with The Public Theater