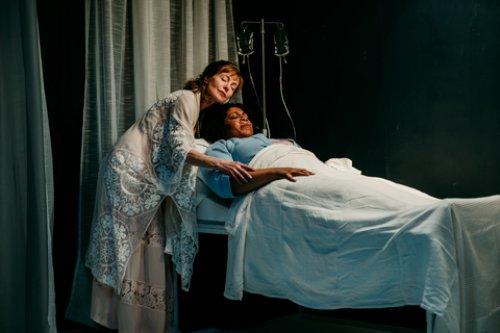 Dey Young and Dana Scurlock in a scene from Georgette Kelly’s “I Carry Your Heart” (Photo credit: Sehee Kim)

Looking back at it, Georgette Kelly’s I Carry Your Heart is an overly ambitious play that attempts to say so much more than it’s capable of saying. In the first place, it’s about a heart transplant, but then, in the second and third and fourth place, it attempts to make connections between the various characters we meet.

Though it doesn’t take long to anticipate that there are some background connections between the donor, named Debra (Dey Young), and the recipient, Tess (Dana Scurlock), it may take a while before you discover that each and every character is connected to one another in this overly contrived drama.

As directed by Cate Caplin in a somewhat shapeless if literal manner, Young as Debra roams around the stage and hovers behind a curtain like the phantom her character basically is. As both Debra and then Phoebe say, “You can’t leave what tethers you.” 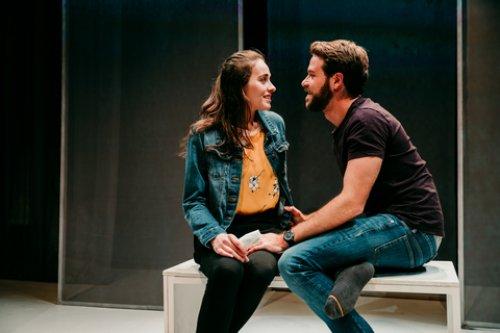 Rebi Paganini and Nico Piccardo in a scene from Georgette Kelly’s “I Carry Your Heart” (Photo credit: Sehee Kim)

Though playwright Kelly strives for poetry at times–in addition to that last quote, consider Josh’s mother calling him a “terminal optimist” and also learning that the play’s title is taken from e. e. cummings–it’s more or less done in by her contrivances. She also conveys too much of the exposition through her biggest contrivance of all: Debra, an author, has left behind a memoir for Phoebe to read, and she reads it aloud to Blake, thereby imparting much of Debra’s story.

With a certain irony, Debra’s memoir ends when Phoebe is born. Yet another contrived connection finds that both Blake and Tess read Debra’s “books” in college.

Though Scurlock and Sarro have their moments, the only member of the cast to breathe real life into his character is Torres, as a probing yet confident Josh.

Set designers Justin Swader & Christopher Swader have not only their hands full but also the smallest stage space at 59E59 Theaters overstuffed to set various scenes, including the hospital room, Blake’s apartment, as well as Phoebe’s and more. If I Carry Your Heart is overly ambitious, it seems to cry out for a much larger theater.