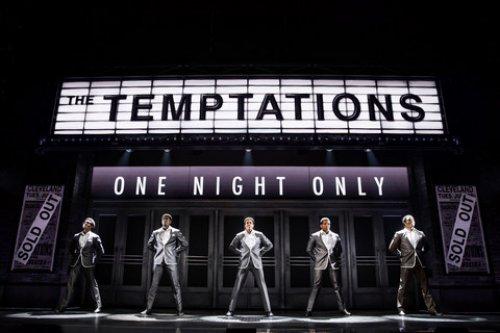 Ephraim Sykes, Jawan M. Jackson, Jeremy Pope, Derrick Baskin and James Harkness in a scene from the new musical “Ain’t Too Proud: The Life and Times of The Temptations” at the Imperial Theatre (Photo credit: Matthew Murphy)

Lackluster though sensationally performed, this latest Broadway jukebox musical, Ain’t Too Proud: The Life and Times of The Temptations is a formulaic blend of cornball biographical incidents accompanied by marvelous renditions of greatest hits. It’s a tuneful slog of two and a half hours.

Acclaimed playwright Dominique Morisseau’s book is a rudimentary compendium of trite show business lore.  It’s based on a memoir, The Temptations by founder Otis Williams with Patricia Romanowski. The band is formed, they succeed, battles with Motown ensue, discord arises, the 1960’s rages, members get caught up in substance abuse, expulsions occur, personal relationships suffer and the survivors soldier on to an upbeat finale. Yes, it’s a string of clichés but that’s the nature of the genre. Morisseau has done a professional job of providing a solidly dutiful framework in which to incorporate the songs.

“Ain’t Too Proud to Beg,” “Get Ready,” “The Way You Do the Things You Do,” “Since I Lost My Baby,” “You’re My Everything” and of course “Papa Was a Rollin’ Stone” are among the show’s more than 30 numbers. Besides those by The Temptations, there’s a choice selection of songs by their contemporaries such as The Supremes. All of them are rousingly performed by the orchestra and the company under the direction of conductor Kenny Seymour. 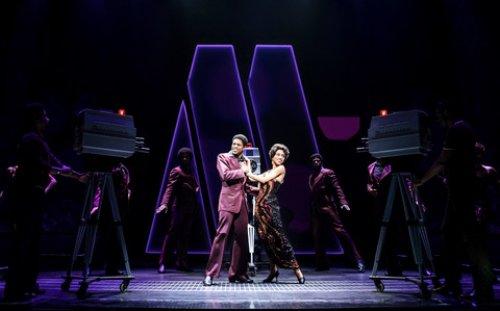 Jeremy Pope and Candice Marie Woods in a scene from the new musical “Ain’t Too Proud: The Life and Times of The Temptations” (Photo credit: Matthew Murphy)

The magnetic Derrick Baskin’s soulful presence and accomplished singing, acting and dancing skills as the narrator, Temptations’ Otis Williams, is the show’s centerpiece carrying it to modest success. As Motown’s wily chieftain Berry Gordy, the charismatic Jahi Kearse is gleefully opportunistic and his recurring appearances are delightful. 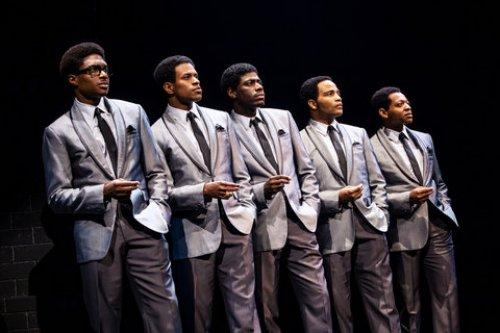 Ephraim Sykes, Jeremy Pope, Jawan M. Jackson, James Harkness and Derrick Baskin in a scene from the new musical “Ain’t Too Proud: The Life and Times of The Temptations” (Photo credit: Matthew Murphy)

The nearly black and white production is on the muted side, though the brief onstage appearance of a red Cadillac is a cool touch.  Scenic designer Robert Brill resourcefully relies on a turntable to get the cast speedily through time and space with minimal furnishings appearing and leaving on tracks. Howell Binkley’s lighting design has a dark slant, suggesting an earlier era. The musical numbers and dialogue are well balanced by Steve Canyon Kennedy’s sound design. Appropriate historical and symbolic imagery is finely represented by projection designer Peter Nigrini. Costume designer Paul Tazewell’s sober outfits for the group are interspersed with some flashiness for other characters.

Since its 1960 creation in Detroit by Southern-born African-Americans, The Temptations have achieved great success, won Grammys, gone through numerous permutations and continue to perform. Ain’t Too Proud: The Life and Times of The Temptations faithfully if wanly imparts these facts and impressively represents their music.

Ain’t Too Proud: The Life and Times of The Temptations (open run)