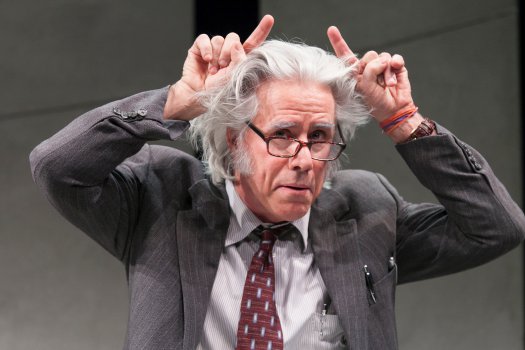 A strangely miscast lead actor is the chief flaw of this unsatisfying bio-drama about the irascible, left-wing defense attorney, William Kunstler.

His gray hair wildly grown out, eyeglasses perched above his forehead and wearing a rumpled suit, Jeff McCarthy does bear a resemblance to the subject.  However, his robust characterization is more Harold Hill from The Music Man, rather then the growling, old Jewish man Kunstler was.  In 1995, when the play takes place, Kunstler was 76 years old, and died later that year.

The accomplished Mr. McCarthy at times indeed appears to be on the verge of breaking out into a song and dance number.  Since McCarthy has distinguished himself in such musicals as Urinetown, Sideshow and as a replacement Billy Flynn in Chicago, that is not so far fetched.  He also does a number of facile and hammy impressions of public figures referred to in the play such as various contentious judges, Lyndon Johnson and Richard Nixon.

McCarthy pronounces several Yiddish words with less then realistic results.  It’s as if Cherry Jones were playing Bella Abzug and spoke in her natural Southern accent.  Those who have never seen or heard the actual Kunstler could very well acclaim McCarthy’s energetic performance, and those who are familiar with Kunstler could be distracted by it.  Without a believable Kunstler, the merits of the play are murky. 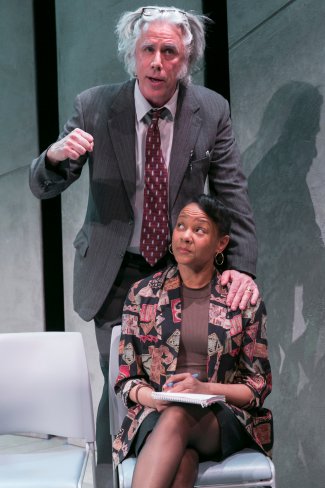 In Kunstler, playwright Jeffrey Sweet recounts the defense attorney’s life and career in his well-written, comprehensively researched, and affectionate treatment.  The conceit is that Kunstler is to address an audience of law school students at a university.  Kerry is a young woman who is the vice-chair of the program committee attends him to him and becomes his foil, and is the play’s secondary character.  This construction allows for a free wheeling manner of imparting the chronological details.  It’s a solid take that could have certainly been at least a routine biographical exploration, but is undone here by the odd casting.

Kunstler’s time as a middle-class careerist in Greenwich Village in the 1950’s, becoming involved in the Civil Rights Movement, assisting Martin Luther King, the Vietnam War, the 1968 Chicago riots, the Catonsville Nine, the Chicago Seven, Attica, Wounded Knee, John Lennon and Yoko Ono, John Gotti, Colin Ferguson, and the Central Park Jogger Case are among the milestone topics covered, often with reenactments of the events.

Sweet adds to the drama that Kunstler was very controversial and there are recorded sounds of students protesting his appearance, trash that was thrown onstage and a garish effigy of him hanging in the auditorium labeled “traitor.”  Less successful are whimsical fantasy sequences.

The charming Nambi E. Kelley does her girlish but hard-edged best as Kerry.  By design and precedence, the role is more of a device then a person, and Ms. Kelley personalizes it with her pleasant performance. 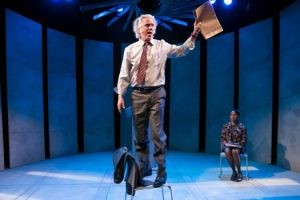 Director Meagen Fay emphasizes the vaudeville elements of the play and has McCarthy in full throttle, but does slow the pace down for the serious portions.  Sometimes it’s too slow as tedium periodically sets in.

The stylized gray auditorium created by scenic designer James J. Fenton is clinical, abstract and dull. Betsy Adams’ lighting design is steady with minor results.  Composer Will Severin’s original music is good and his sound design is well balanced.  Elivia Bovenzi’s costume design is a fine selection of garments that represents the characters.

William Kunstler was a formidable and colorful figure who was involved with a number of historic incidents.  He is certainly worthy of dramatization, but Kunstler is overall a missed opportunity to do so.

The Creative Place International in association with AND Theater Company