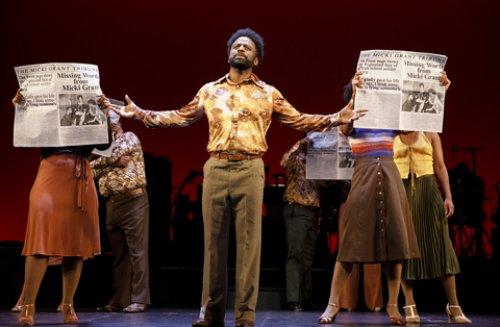 CK Edwards and ensemble in a scene from “Don’t Bother Me, I Can’t Cope” (Photo credit: Joan Marcus)

Over 20 songs in 75-minutes are exuberantly realized by Savion Glover’s propulsive direction and choreography in this New York City Center Encores! Off-Center revival of the 1972 Broadway revue, Don’t Bother Me, I Can’t Cope. The cast and ensemble of singers and dancers is terrific, forcefully performing solos and group numbers throughout.

This plotless, mostly sung-through exhibition conveys the tumultuous 20th century urban African-American experience through Micki Grant’s dazzling score for which she wrote both the music and lyrics. “Universe in Mourning,” “Harlem Streets,” “Ghetto Life” and “Billie Holiday Blues” are some of the titles.

With the curtain down and the audience in darkness, a witty poem is heard in a sly voice over recorded by the composer-lyricist. It has the depth and style of the likes of Langston Hughes but was actually written by Ms. Grant.

Conceived for the stage by the original production’s director Vinnette Carroll, Ms. Grant also wrote the show’s book. The time period ranges from the 1930’s to the 1970’s. The eclectic compositions are in the styles of jazz, swing, funk, rock, pop, Motown and gospel. 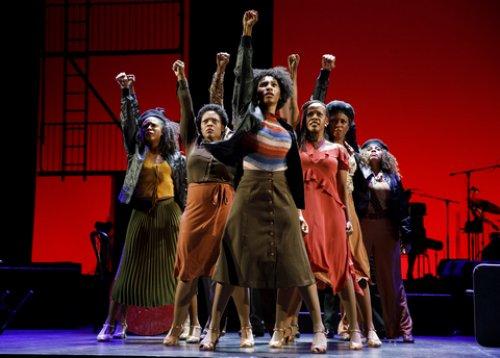 The Ensemble in a scene from “Don’t Bother Me, I Can’t Cope” (Photo credit: Joan Marcus)

That last genre is represented by the show’s final sequence, a raucous collection of songs with the company wearing red robes reverently and irreverently carrying on in church. It showcases Mr. Glover’s renowned command of tap dancing as everyone is vigorously tapping. Previously Glover has demonstrated a variety of dance styles and grasp of stagecraft that makes the production visually compelling and crisply paced.

Scenic designer Donyale Werle provides a dreamy atmosphere that resembles various dimensions. Besides a church, there’s a nightclub with tables, chairs and platforms for the singers, a mirror ball and backdrops of vintage fire escapes.

Mark Barton’s lighting design is a swirling palette of hues and bright and dark tones. The singing, musical flourishes and effects including police sirens and gunshots are richly rendered by sound designer Leon Rothenberg. 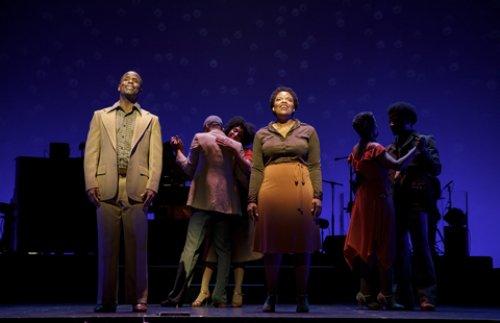 James T. Lane and Rheaume Crenshaw in a scene from “Don’t Bother Me, I Can’t Cope” (Photo credit: Joan Marcus)

Orange is the primary shade of Clint Ramos’ grand costume design. Mr. Ramos has crafted a voluminous array of garments that artfully evoke different eras particularly the 1960’s with Black Panther berets and the 1970’s with wild print shirts.

It seems like that electrifying gospel event is the conclusion but then there’s the encore of the title number. “Don’t Bother Me, I Can’t Cope” is yet another masterwork of song and dance and a perfect finale. It’s a Rowan & Martin’s Laugh-In-style sung medley of snappy complaints by one cast member in succession that giddily leads to the end. 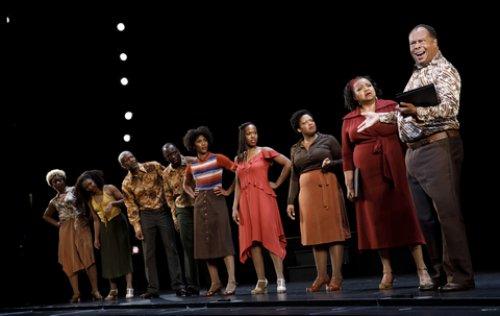 Wayne Pretlow (far right) and ensemble in a scene from “Don’t Bother Me, I Can’t Cope” (Photo credit: Joan Marcus)

After trying out in Washington, D.C. and Philadelphia, Don’t Bother Me, I Can’t Cope opened on Broadway on April 19, 1972 and ran for 1065 performances. It’s four Tony nominations included Best Musical and Ms. Grant for her score and book. Ms. Carroll was the first African-American woman to be nominated for Best Director. George Faison’s choreography was also nominated.

This highly pleasing New York City Center Encores! Off-Center production reveals Don’t Bother Me, I Can’t Cope to be of its time while still being timeless entertainment though Grant has recently updated her lyrics with a new Rosanne Barr joke and a reference to “Trayvon gone.”