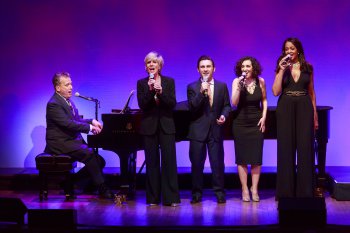 “He was tied to the life of jazz clubs,” said Billy Stritch of Cy Coleman, the subject of The 92nd Street Y’s Lyrics & Lyricists Series Presents: Witchcraft: The Jazz Magic of Cy Coleman.  Mr. Stritch was the personable host, artistic director, and performed on piano and was a vocalist along with four other talented singers during this very entertaining and jazzy concert.

Andy Propst, author of the biography You Fascinate Me So: The Life and Times of Cy Coleman co-wrote the highly informative commentary with Stritch, that he engagingly delivered.

Cy Coleman (1929-2004) was a Bronx born child piano prodigy who later became a celebrated composer of popular songs and for Broadway musicals such as Little Me, Sweet Charity, and Barnum.

This concert focused on his standalone songs, cut songs, and relatively obscure ones from shows, many of which were not produced or closed before reaching New York.  This lent the event a fresh and novel quality as numerous selections were heard for the first time by many in the audience.

Coleman’s hard-edged pragmatism about show business led him to being extremely proactive. He was involved with as many as five projects at one time in the hopes that at least one would actually get produced. 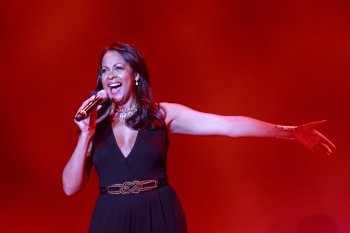 “They were like the songwriting version of Elizabeth Taylor and Richard Burton,” Stritch remarked of Coleman’s tempestuous lengthy relationship with his frequent collaborator, lyricist Carolyn Leigh (1926-1983).

They met in The Brill Building in the 1950’s and their monumental association was well represented here with the opening combination of their classics “The Best Is Yet To Come” “Witchcraft” and “When In Rome (I Do As The Romans Do).  Also heard were  “A Moment of Madness,” “You Fascinate Me So,” “I Walk A Little Faster,” “A Doodlin’ Song,” “On Second Thought,” “Take It From The Top,” “Bouncing Back For More,” “Rules of The Road,” and “Let Me Down Easy.”  Stritch’s favorite “It Amazes Me” was powerfully sung by him solo at the piano.

The statuesque and charismatic La Tanya Hall gave show-stopping renditions of “Why Try To Change Me Now” with lyrics by Coleman’s first collaborator Joseph McCarthy Jr., and “Let Me Down Easy.”  Ms. Hall did an amusing duet of “Cheatin’” with lyrics by Marilyn and Alan Bergman about scorned women that featured the sound of phone calls with Gabrielle Stravelli.

Ms. Stravelli also utilized her alluring forcefulness during her compelling performances of “On Second Thought” and “Rules of The Road.”

Blonde, beaming and leggy, Debby Boone was sensational particularly on “Here I Go Again” and she also did wonderful versions of “I’m Gonna Laugh You Right out of My Life” and “Pink Taffeta Sample Size Ten” that was cut from the score of Sweet Charity. 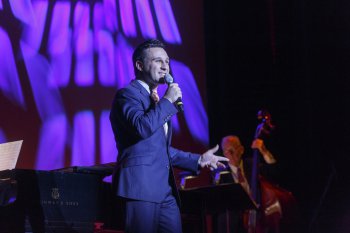 Another song excised from it was “You Wanna Bet” which is a snappy comedy number that was energetically sung by Nicolas King.  The very youthful Mr. King was making his 92Y debut and his compelling showmanship was evident during his performances of “I Walk A Little Faster” and “Suddenly.”

“What took you so long?” was legendary lyricist Dorothy Fields’ reply at a cocktail party when Coleman asked her if she wanted to work with him.  They went on to write the musicals Sweet Charity and Seesaw together.

The superb musical trio that enlivened the concert was made up of in addition to Stritch on piano by Rick Montalbano on drums and Jay Leonhart and bass.  They all brilliantly evoked the quintessential sophisticated New York City 1960’s Mad Men sound of many of the compositions.  Mr. Leonhart is also a noted songwriter and singer and his hilarious performance while on bass of the novelty number “The Laarge Daark Aardvark Song” with lyrics by Allan Sherman was a standout.

Director Scott Faris kept everything at a brisk pace with his picturesque staging that gave each performer their moments to shine alone as well as marvelously choreographed group numbers and integrating the technical elements seamlessly.

Throughout the show slides of Coleman’s life and career were projected including one of him and Leigh early in their careers with her poignant hand written caption, “When we were babes.”  Also shown were 1950’s black and white video clips of Coleman on various television programs performing.  Most enjoyable was one of him with pipe-smoking Hugh Hefner during a Playboy’s Penthouse broadcast singing “Witchcraft” at the piano.  That led to a reprise of the song with the company for the fitting and rousing finale.