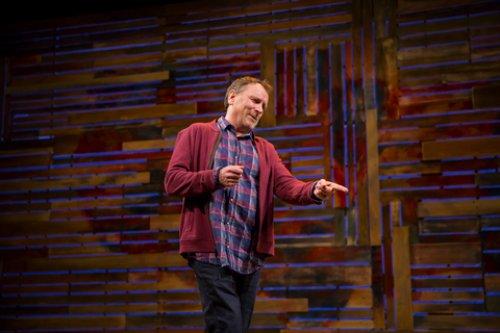 “Let’s start with the northeast… my state: New York. Once drunken writers at The Algonquin. Now drunken texters at SantaCon” so launches writer and performer Colin Quinn into the climactic routine of his very funny standup comedy show Red State Blue State. It thoughtfully tackles the grim contemporary U.S. political scene. “Florida. You bum. You used to be the crown jewel of the east and now you’re hanging out in a 7/11 parking lot sucking lithium out of car batteries.” With his own spin on Don Rickles-style insult humor, Mr. Quinn hilariously skewers each of the 50 states.

The Brooklyn-born Quinn has been performing stand-up since the 1980’s and his seasoned wise guy New Yorker persona was once showcased on Saturday Night Live and in recent years in several theater pieces. Clad in a plaid shirt, black jeans and sneakers, this show business veteran uses his tuneful gravelly voice with its cadences of the streets to optimum effect. His material is a model example of superior comic writing. Bursts of perfectly crafted one-liners constructed in the classic form of set ups and punchlines, skillfully composed observational riffs and occasionally addressing audience members directly, all sustain Red State Blue State’s 75 minutes.

Europe was our size and they separated into countries because they knew every 700 miles people’s personalities are different. Do you really think Hungary and Scotland have less in common than Utah and New Jersey? 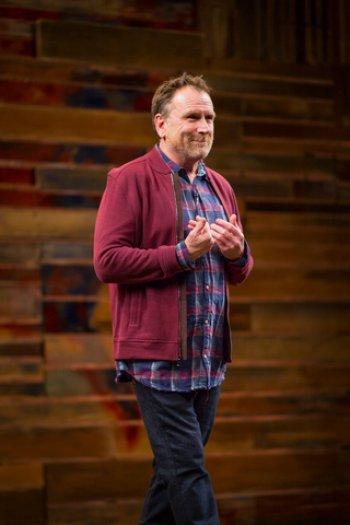 People say robots will take over. First of all, they should. They’re non-gendered, non-racial, non-religious. They’re the perfect citizens for the new world. Robots are better than us. My phone has given me more pleasure and information than all of my friends put together over the course of my life.

Maybe we’re the robots. Maybe we’ve reached the end of our humanity. 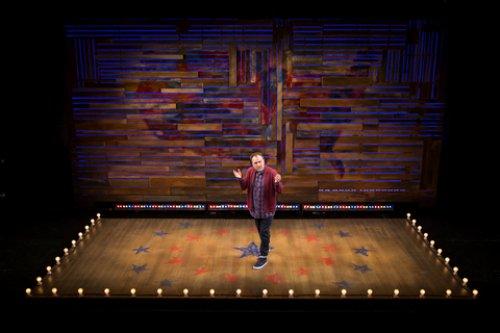 Edward T. Morris’ scenic design is suggestively dystopian.  The harsh backdrop is a configuration of wooden slats on which in faded colored ink the jagged outline of the U.S. can barely be discerned and later on tiny lights designate the states. Lighting designer Aaron Copp’s atmospherically employs a collection of bulbs in basic fixtures that are scattered about the floor along with strands of holiday lights. Sam Kusnetz’ sound design skillfully modulates Quinn’s delivery and the minimal effects.