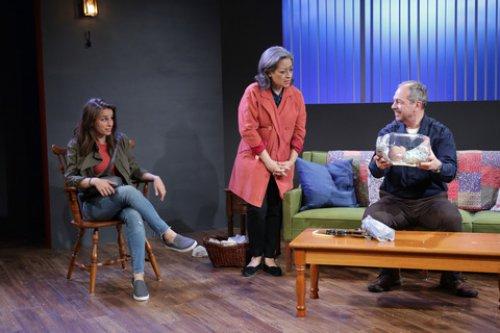 “It’s natural, but that doesn’t mean you want a placenta on the coffee table!” is characteristic of the sharp one-liners in playwright Chiara Atik’s insightful, inventive and entertaining comedy about pregnancy, Bump.

That quip is delivered by Maria to her pregnant daughter Claudia. She is in her 30’s and plans on a natural child birth in her living room’s birthing pool with her husband and a midwife in attendance. Maria is dubious about not going to a hospital but the headstrong Claudia is determined.

Luis, her auto mechanic father, is so squeamish that he has to leave the room upon hearing of all the clinical details during the matter of fact discussion. Nevertheless, he becomes intrigued and after watching a YouTube video about getting a cork out of a bottle has an epiphany. He is inspired to create “The Vazquez Device” in his garage.  It’s a contraption that extracts an infant from the birth canal instead of using invasive forceps and is incredibly “The first innovation in birthing technology in 600 years.”

Ms. Atik complements her engaging contemporary scenario with creative theatricality. Interspersed are vignettes with six performers depicting the members of a nationwide pregnancy Internet message board. Atik also has contrasting sequences set in 1790 in rural Maine between Mary, a sheltered 19-year-old woman about to give birth for the first time.  Her husband is out of the way in the town’s tavern and an experienced midwife arrives to assist her. 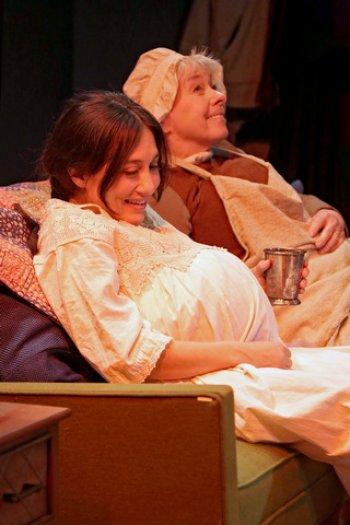 The totality of these plot threads makes for a charming and engrossing take on the subject due to Atik’s highly skillful writing that combines an imaginative structure with snappy dialogue. The bright cast provides vivid characterizations.

In her brief, though forceful appearances as Mary, the magnetic Lucy DeVito offers a terrific portrait of a clueless young woman constricted by the constraints of her era. The seasoned Jenny O’Hara’s midwife who has delivered 812 babies is a wonderful blend of cantankerousness and warmth.

The sparkling performances and lively pacing are facets of director Claudia Weill’s engaging presentation. Ms. Weill came to prominence as a film director with the rich tales of relationships in New York City, Girlfriends (1978) and It’s My Turn (1980) that starred Jill Clayburgh and Michael Douglas. Weill’s light touch and humane sensibility remain potent.

Scenic designer Kristen Robinson’s inspired simple setup aids considerably to the production’s success. A basic living room set with a couch, table and chairs and incidental furnishings swiftly becomes several locations without laborious alterations. A large rectangular window above the couch cleverly serves as the performance area for the actors portraying the message board participants and the “YouTube Guy.”

Though well-observed and breezy, Bump does have a measure of grim reality to prevent it from becoming treacle.