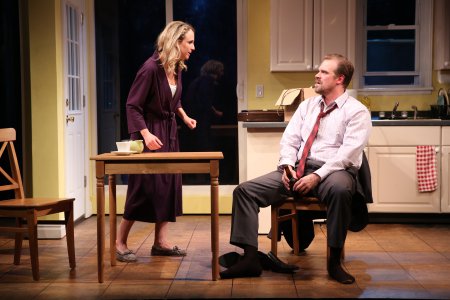 Katya Campbell and David Harbour in a scene from “Cal in Camo” (Photo credit: Carol Rosegg)

A troubled suburban married couple with a newborn daughter, the wife’s visiting disturbed brother, a deer and an ominous sinkhole in the backyard are featured in the baffling overwrought short play, Cal in Camo.

Playwright William Francis Hoffman offers a quirky, weirdly compelling if not totally satisfying take on contemporary American life.  Mr. Hoffman’s dialogue is richly expressive bordering on poetic and enhances his true to life melancholic characters.  The plot is slender and problematic.  It has the sense of a symbolism-laden short story adapted for the stage rather then a developed play.

The brief first scene is set in a small town bar.  There we meet the 40ish Chicago-born and bred Tim.  He is a salesman who is hawking a line of artisanal fruit-flavored beers, “it has tones of orange” to the weary good-natured bar tender who is well played by Gary Leimkuhler.

The action shifts to Tim’s housing development residence where his 30ish Missouri-born wife Cal takes care of their infant daughter.  There is arguing over money and we learn that she forced Tim to give up his successful sales route so they could move out of the city to raise their child in the suburbs.

The marriage is further strained by the announcement that her brother Flynt is on his way from Missouri for solace after his wife drowned in a flood.  He arrives in grimy overalls, is taciturn and is given to enigmatic Sam Shepherd-style reveries including one about a deer who has been visiting the couple’s backyard.  Flynt also notices a large sinkhole there that adds to the abounding symbolism.

Cal and Flynt’s mother abandoned their family when they were children and their relationship is fitfully close as they are only siblings.  Cal’s damaged psyche has led her to seek a stable life with the middle-class Tim, the son of a police captain. 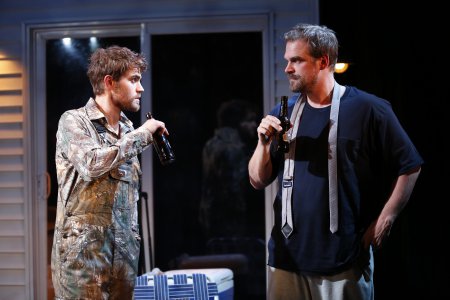 Paul Wesley and David Harbour in a scene from “Cal in Camo” (Photo credit: Carol Rosegg)

The play’s scenes are punctuated by the eerie lighting design of Grant Yeager and Amy Altadonna’s foreboding electronic sound design that both suggest impending melodrama.

With his doleful demeanor and often sweetly monotone voice, the youthful Paul Wesley makes a very haunting impression as Flynt.

John McDermott’s set design ably and simply represents the bar, kitchen and back porch with a swift turntable setup and realistic furnishings.

The characters are finely visualized by Sueann Leung’s excellent and authentic costume design.

August: Osage County had over three hours to boldly reveal its family secrets. The 75-minute Cal in Camo is interestingly odd but is off-kilter.