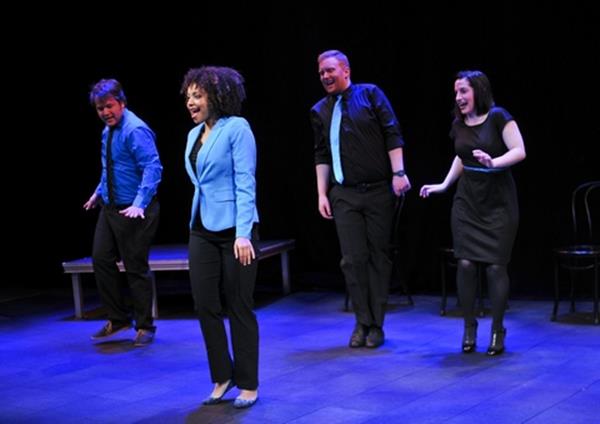 The Cast of “Blank! The Musical” (Photo credit: Jenny Anderson)

“Only The Amish Know!” is the title of the folderol of a musical presented as the reportedly “totally unscripted” centerpiece of Blank! The Musical.


The genial T.J. Mannix serves as the opening host of this drawn-out semi-improv show. Through using a smartphone app, the audience votes on a title, three songs, and a line of dialogue for the original, improvised musical to be performed. People in the audience not using the app are able to shout out their selections. The winning choices are announced and the actual show begins. The audience is never consulted again.

Indeed, the cast of six does initially perform three songs that are said to have been made up on the spot, and the forgettable plot is an inane, convoluted affair involving the Amish in Lancaster, Pennsylvania, and the voted on line of dialogue is eventually delivered. What about the rest of the show?

Also perplexing are several audience members who happen to be sitting strategically throughout the theater and who are in constant, loud, hysterics, throughout the show.

The stage has chairs, two small platforms, and the musicians off to the side in full view. Large screens above and on the sides of the stage project the choices the audience votes on, as if on a television game show. The performers wear color-coordinated black and blue outfits.

The creators, Michael Girts, T.J. Shanoff, and Mike Descoteaux, have in theory, an intriguing concept, but viewed in this full-sized venue it doesn’t fulfill its promise. Perhaps if it were presented in a comedy club without all of the theatrical accouterments its premise might actually could be believable. Mr. Shanoff is also the show’s director, and in that capacity does a very fine job of staging the proceedings.

The excellent band that often plays wonderful jazz arrangements includes music director Mike Descoteaux on piano, Daniel Bennett on reeds, and drummer Al Vetere. Their work during the Leonard Bernstein-style overture of the performed musical is most impressive.

Blank! The Musical, doesn’t appear to live up to its touted claim of being entirely invented and without any rehearsal. With these elements absent, it’s an innocuous production that those in the mood for an evening of raucous sketch comedy might enjoy.