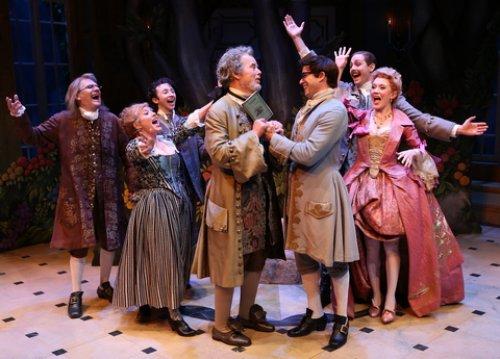 David Ives, who established himself as a gimmicky playwright with his early play All in the Timing, is back with another gimmick of his, involving rhymes. Following The Liar and The Heir Apparent, The Metromaniacs is the third of Ives’s so-called “translaptations”–or a cross between a translation and an adaptation. It is based on an “obscure” 1738 French play (by Alexis Prion) called La Metromanie, about the then mania for poetry that had overtaken Paris.

In a program note, Ives explains that La Metromanie puts us in “a levitated reality that’s the exact opposite of the vernacular, and that it’s “champagne, not ale.” He further explains that when it was written Paris had “fallen in love” with the poems of Mademoiselle Malcrais de La Vigne, a poetess in Brittany, only to discover that she was really a man living in Paris. 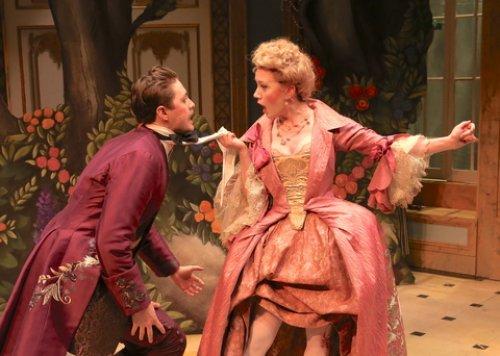 In The Metromaniacs, that poet becomes one Francalou, whose daughter Lucille, is in love with poetry. Set in the ballroom of Francalou’s house–replete with candelabra, tile floor, and gold trim over the doors–the other characters gallivanting about including Lucille’s maid, Lisette, and Dorante, a young man in love with Lucille. There is also another, younger poet, Damis–who is also in love with Lucille–and his valet Mondor, not to mention his uncle Baliveau. It’s almost like a Restoration comedy, with assumed aliases and mistaken identities.

To add that The Metromaniacs also contains a play within the play, in which all of the characters are apparently playing themselves, might begin to suggest how confusing it all becomes, especially since they all enter and exit with a rapidity as if there were indeed a fire in the house–meaning Francalou’s no less than The Duke Theater on 42nd Street. 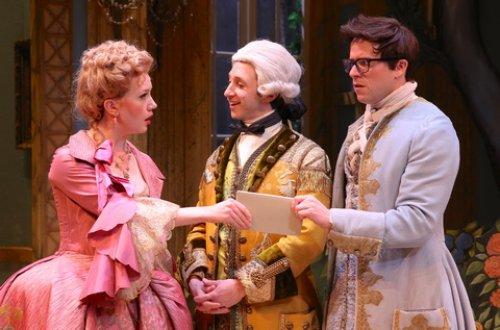 The set up leads to lines such as Damis himself saying, “Damis… or not Damis… That is the question.” It also leads to Lisette’s impersonating Lucille, donning the same pink gown and long blonde tresses. Rather than attempt to make sense in a review of a play that seemed impossible to follow in the viewing, let me add that Ives’ emphasis is on the language and the rhymes. And boy, does he have fun with them, pairing “house” with “spouse,” for example, and “slaughter with daughter.” They are sometimes simple (“juicy” and “Lucy”) but more often sophisticated (“incognito” and “libido” or “ignoramus” and “famous”).

Also inexplicable are the out-of-whack anachronisms, such as Dorante’s reference to both “subways” and “hockey.” But as conceived by Ives and directed with perhaps too much dispatch by Michael Kahn, the emphasis is also on the theatricality of the event. There’s even a show curtain and a faux proscenium arch on the stage at The Duke. (The handsome set is by James Noone and the gorgeous, period costumes were designed by Murell Horton.) It more or less begins when Francalou says, “What about our show? The stage is set? The actors and musicians, they’ve all met?” And then he adds, a few lines later, “What’s more theatrical than this: an artificial sylvan wood where yesterday my Paris ballroom stood?” 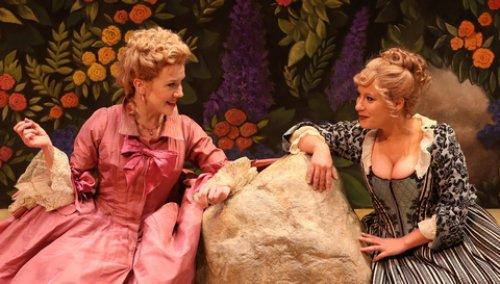 All of the players seem to have a firm grasp on their exaggerated characteristics, in what is almost a commedia delle’arte style: Amelia Pedlow is a dumb-blonde Lucille. Dina Thomas seems to be impersonating Bette Midler, as the saucy and lascivious Lisette. Adam LeFevre is a befuddled Francalou. Noah Averbach-Katz is the lovesick Dorante, Adam Green is the busy Mondor, and Damis and Baliveau are played, respectively, by Christian Conn and Peter Kybart.

Though it is not The Play That Goes Wrong–currently the longest running play on Broadway–The Metromaniacs could more aptly be called The Play That Fails to Go Right.