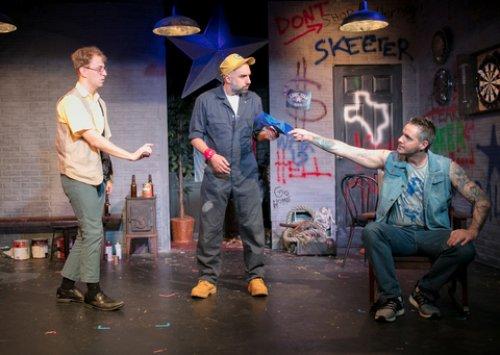 When it first surfaced in the late 1970’s, James McLure’s Lone Star—billed as a comedy in one act—was a hit, in New York and elsewhere. Mel Gussow, in his 1979 New York Times review of the Off-Broadway production starring Powers Boothe (presented on the bill with another McLure one-acter), praised the “breezily staged” play, which, he said, “never loses its sense of the ridiculous” and “proudly waves its banner of comedy.” Looking back on that review after seeing the current New York production from Ruth Stage and the 13th Street Repertory Company, you may wonder what, exactly, Gussow had seen, that we’re not seeing now. This new iteration, featuring Matt de Rogatis in the Boothe role, elicited only a few chuckles at the performance under review.

Such lukewarm response may be attributable, at least in part, to the changing times. Lone Star focuses on a not-so-old Good Ol’ Boy from rural Texas named Roy (de Rogatis). He’s a Vietnam veteran who drunkenly bullies his younger brother, Ray (Chris Loupos), outside the back of a local bar called Angel’s. Roy also bedevils a former high school classmate named Cletis, aka “Skeeter” (Michael Villastrigo), a nerdy nincompoop who has long envied Roy for his swagger and alleged popularity with women. At one point in the show, Roy enumerates for Ray the ugly atrocities against Vietnamese citizens that he saw during the war, in essence bragging about his capacity to endure it all. In a culture that has become increasingly sensitive about the horrors of Post-Traumatic Stress Disorder, there’s little room now for humor surrounding such content. Perhaps, too, audiences are simply less amused than they used to be by depictions of rural Texans as dung-kicking buffoons, which is probably a good thing.

Unfortunately, de Rogatis is part of the problem. He is a talented and intense performer, and he digs deep to create the character here. Too deep, one could argue. From the moment we first encounter him as Roy, we see the anguish in his eyes and sense the pain that is coursing through his veins. There are times when he has the manner of a tragic figure out of Euripides. In his interactions with the other actors, he tends to speak out beyond the fourth wall. Is his Roy beseeching those stars that he counts in the night sky, or is he maybe communing with the moon that he occasionally bays at, coyote-like? It’s possible he’s simply playing to the audience. In any case, what he does is not at all conducive to the comedy McLure apparently envisioned.

Brother Ray is a guy who’s likely more insightful and resourceful than he lets on. He’s certainly less self-delusional than Roy. It’s a tricky role. Loupos strives to make it work but doesn’t quite nail it. As for Villastrigo, he carves the character of Cletis out of a heavy slab of shtick. Director Joe John Battista can’t bring all these disparate acting styles together. The play is overloud, and the dialogue filled with pauses that work against the idea of any kind of communication among the characters. The actors move around a lot when they need to sit still for a spell and listen to one another. 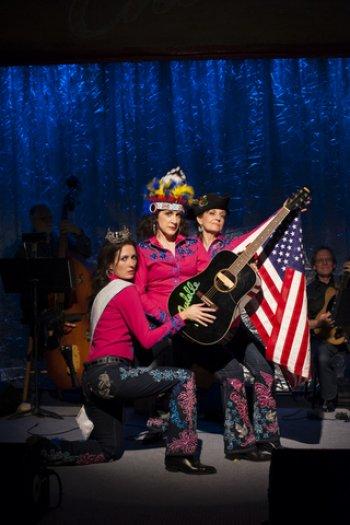 Drained of its comic elements by these various issues, what is the play, exactly? Reading it, one might feel it to be the first act of something more substantial—something that McLure planned but then decided to cut short. The producers here have filled out the evening with a first act consisting of a set of of country music, from a trio of women called The Chalks (Leenya Rideout, Mary Brienza, and Kathryn Markey). Their songs are comedic paeans to outlandish, hard-edged redneck living. One number, for instance, celebrates the Seven Deadly Sins. The Chalks are enjoyable enough, but they set up an expectation for rollicking comedy that McLure’s play doesn’t deliver. (Note: The Chalks will be out of the show starting June 13, after which Rideout will stay on as a solo performer.) This first act also includes two characters, played by Tony Del Bono and John Constantine, who welcome the audience to the proceedings and horse around a bit. Their contributions are harmless, but they, too, prepare the audience for silliness rather than pathos.

The work of lighting designer Allison Hohman and costume consultant Wendy Tonken seems just fine. Whether Ray would wear what seems to be an auto mechanic’s uniform when he goes out drinking, though, is open to debate. No one is credited in the program for the set. It is flexible enough in design to depict both the inside of Angel’s Bar in the Chalks sequence and the area outside during Lone Star itself. Unfortunately, the flats depicting brick walls have some give to them, something that becomes apparent whenever anyone pushes against them. Also uncredited is a projection at the top of the play, which works as if it were the opening credits of a film. This feature doesn’t seem necessary but isn’t objectionable.

This production provides a cautionary tale for anyone these days who wants to mount a play from 30 or 40 years ago. Be aware of how changing attitudes about race, gender, class and geographic stereotypes may alter an audience’s perceptions of a work’s content.

Running time: two and a half hours with one intermission