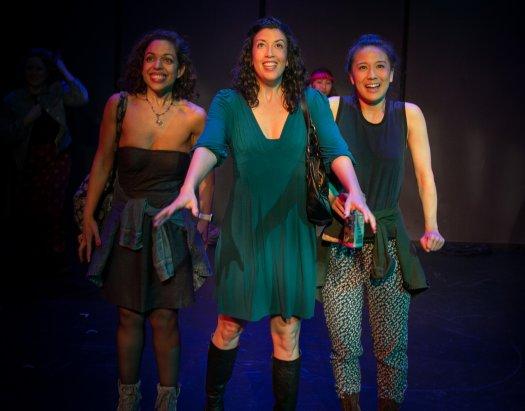 Great Again is a program of two intriguing and engrossing works by women playwrights that subtly reflect the aftermath of the 2016 U.S. presidential election. They were commissioned by the Project Y Theatre Company for their second annual Women in Theatre Festival.

Chiori Miyagawa’s In the Line is a 45-minute series of thoughtful vignettes that take place on various lines and at cafes and restaurants.  Ms. Miyagawa’s dialogue is often poignant and wry, and it all builds to a wistful conclusion.

They’re linked by the recurring character of the emotional Leanne, whose parents died during 9/11. She is wonderfully played by the captivating Sol Marina Crespo with bewitching intelligence and sensitivity.  We follow her on lines: to vote, to buy a Nintendo game, and to get into a trendy restaurant where she strikes up a friendship with the loquacious Ertha, marvelously performed by Ashley Jones.

Kristin Horton’s well-calibrated direction results in affective performances from the cast and yields visually precise physical staging on the bare space.  This stagecraft is complemented by Sonoko Kawahara’s accomplished choreography with its arresting tableaus, freezes and glorious movement, especially a slow motion sequence at a rock club.

In the Line is a vibrant and theatrically realized mediation on contemporary life, with all of its randomness and surprising degrees of separation. 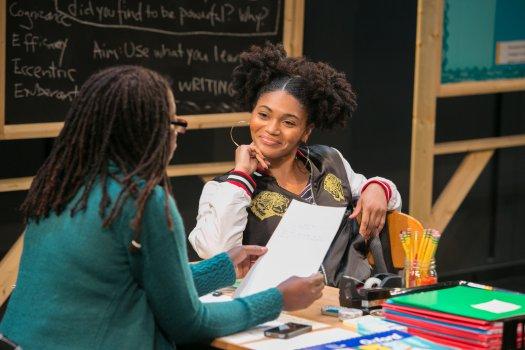 The mystery of who carved a swastika on a desk in the classroom of a struggling high school is the spur of Crystal Skillman’s engrossing The Test.

Ms. Skillman’s 70-minute play is a fine blend of well-delineated characters, flavorful dialogue and provocative situations.  It’s somewhat marred by a pedantic lecture near the end and an overly ambiguous conclusion.

Ada is a 40ish, African-American English teacher grappling with personal and professional problems. Her promising literary career has stalled. Her mother has Alzheimer’s and has recently been institutionalized. She’s sad about a departing teacher that she’s been close with.

“Life is disturbing. Fiction is survival,” she declares.  Lord of The Flies is the book that her class is currently reading.

The overbearing, unseen female principal (comically heard during phone calls) is pressuring her to improve her class’ grades and to find the culprit of the incendiary incident.

The short scenes are punctuated by the harsh tones of the school bell and there are sounds of students that appropriately give a sense of place.   Comic relief is provided by a reappearing silent custodian who paints over the offensive symbol.

It’s crisply staged with a measured pace, a documentarian style and dashes of suspense by director Jessi D. Hill.  The acting is exceptional. 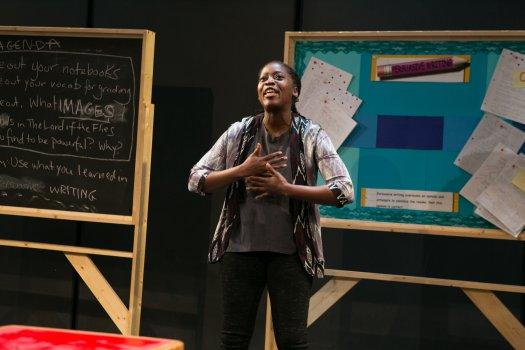 Plausibly and engagingly portraying two of Ada’s students are Angel Moore and Eric Wiegand.  The intense and playful Ms. Moore is girlishly feisty as the outspoken Zarina.  Mr. Moore offers an inspired portrait of a volatile adolescent whose family are Trump supporters.  Moore also skillfully delivers a funny speech that insightfully analyzes the socio-economic aspects of the supermarket C-Town.

The Test is a worthy addition to the genre of noble teachers aiding uneasy students with clever contemporary twists.

An assemblage of blackboards, desks and doorways are the elements of Hallie Zieselman’s artful scenic design for The Test.

“…Allowing new and emerging voices to be part of the theatrical conversation” is the mission of the Project Y Theatre Company that was founded in in Washington, D.C. in 1999.

The goal of their three week Women in Theatre Festival is “a direct response to gender disparity in theatre leadership, casting, and production, the objective of WIT is to broaden the opportunities for women artists, engage with an audience who seek an indie theatre experience, and add to the canon of women playwrights writing roles for women actors.”

The Jeffrey and Paula Gural Theatre at the A.R.T./New York Theatres