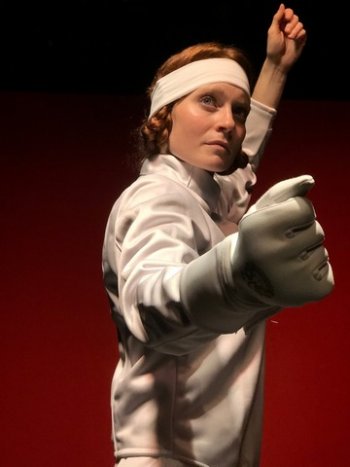 The  American premiere of Henry Naylor’s Games at the SoHo Playhouse is a prelude to the upcoming festival of promising plays harvested from Fringe Festivals all over the world.  It is an auspicious opening salvo.

Games shines a light on the long forgotten stories of two Jewish athletes in post-World War I Germany, a Germany that slid into National Socialism by the 1930’s, effecting the lives of Helene Mayer, a world-class fencer, and Gretel Bergmann, a record-setting high jumper.  The play, directed with attention to pacing and unadorned expressiveness by Darren Lee Cole (assisted by Hayley Procacci) takes the protagonists through the world-changing 1936 Berlin (aka the “Nazi”) Olympics.

The play is constructed as two intertwining monologues as each tells her story.  Yes, their paths cross at crucial times, but the cumulative impact of their individual tales, from optimistic beginnings to their distressing, but sadly satisfying adult lives makes an impact that is both heartbreaking and hopeful.

As a teenager, Helene, whose father was Jewish, her mother not, wangles her way into a boys’ fencing class by hiding behind her mask, proving her thrusting epee was stronger than anyone of the boys’.  She quickly finds Olympic success and becomes a national heroine, her statue in many homes. Her life proceeds, blindered by her need to be the number one fencer, to the detriment of the rest of her life. In her zeal, she forgets her Jewishness.   Even two heartbreaking deaths, while she trains for the L.A. Olympics, only temporarily fazes her; she’s only disappointed that her emotions put her off her goals, causing her to come in fifth. 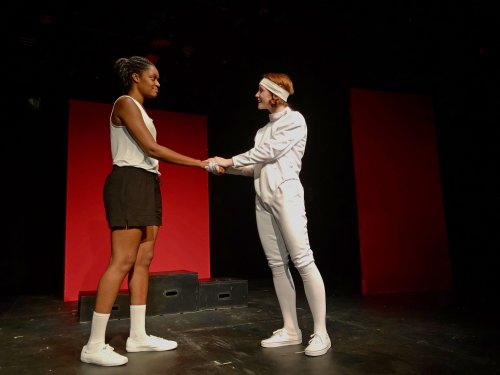 Renita Lewis and Lindsay Ryan in a scene from Henry Naylor’s “Games” at the SoHo Playhouse (Photo credit: Hayley Procacci)

Gretel, supported by her adoring father—both parents were Jewish—discovers her natural talent for running and jumping.  She shows off to the Aryans on her block by trying to beat a Zeppelin that flew over her street, only to be sabotaged by a sadistic neighbor.   Her path is harder than Helene’s as restraints on Jews take effect.  She can’t find proper training grounds—all are closed to Jews.  She goes to Stuttgart where she is housed by supportive Jews who give up their nutritious food for her so that she can keep her energy up and beat the hated Nazis.  She winds up in England.

Helene winds up in America.  Both consider competing for foreign teams, but their reputations gets back to the Nazis who cleverly order them both to return to Germany which, for some reason, they do, leading to heartbreaking successes, but even more tragic defeats.

Gretel first meets Helene when Helene as the National Heroine visits Gretel’s school.  Their meeting is frustrating.  They again meet during training and, finally, when they are much older, seemingly having resolved their fates, resigned to the changes that time has wrought.

Both actresses start coolly, but eventually grow warmer and more involving.  Lindsay Ryan plays Helene with a coolness that is irritating at first until it is clear that she is using her tunnel vision view of the world to avoid thinking about the vast catastrophe that is befalling her, her family, Jews and Germany.  Ryan becomes likeable, even loveable, by the end of the play which says much for her acting ability. 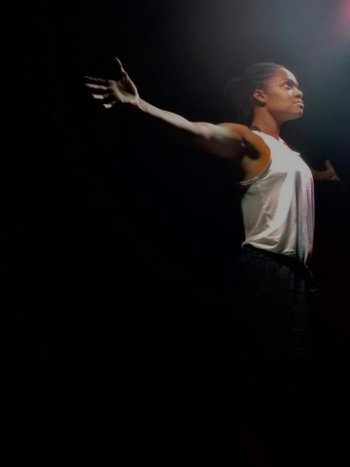 Renita Lewis’ Gretel is always passionate and positive, so her failures register with greater power.  Her connection to her family and other Jews is abundantly clear.  Her Gretel is a tragic figure with a backbone of steel.

The simple set by Carter Ford consists of translucent red panels which allow silhouettes to introduce other characters, all played by the two actresses.  Three black boxes of symbolically different heights—gold, silver, bronze—make up the only other set pieces.  Ford’s lighting and the uncredited sound design help flesh out the story.

Games, though small-scale, deals with a sad period in our too-recent history, illuminating its complexities with heartbreaking directness.