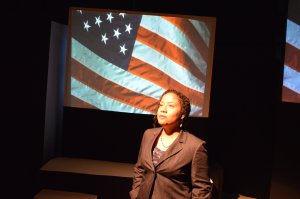 Lisandra Payan as Adaku in a scene from “The Imaginative Space of the African Horizon” (Photo credit: Rick Pulos)

The moving story of two young women who emigrate from Africa to New York City is told in the unwieldy play, The Imaginative Space of the African Horizon.  Structured in ten scenes of alternating monologues between them, its potency is diminished by intrusive video projections that are distracting and cause it to run excessively for one hour and forty minutes without an intermission.

Saliya is from rural Zambia where her mother was a nurse.  Adaku is from Malawi where her father became successful owning a coffin-making business.  Both women recount their life stories that took place amidst the chaos and horrors of the region and both end up living in New York City.

Playwright Rick Pulos has crafted a well researched and emotionally involving documentary drama that goes overboard with its multimedia elements.  The writing is a combination of fine simplicity and the pseudo-poetic that achieves a tender sincerity.

Each character delivers a monologue and that is followed by an often-lengthy video presentation, many of which are extraneous.  There are ones of flowers blooming, newsreel footage, and celestial imagery that go on and on.  Then there is another monologue and then another video.  As a character relates an incident that takes place at Bergdorf Goodman, there’s footage of the store.  Pop songs such as Roy Orbison’s “You Got It” are played in their entirety with accompanying colorful images. 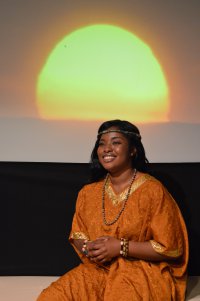 Jennifer Owusu as Saliya in a scene from “The Imaginative Space of the African Horizon” (Photo credit: Rick Pulos)

After a wearying hour of all this, there is real impact as Saliya details her experiences of working in a medical compound with a gay doctor who is HIV positive and that she is HIV positive and her arrival in New York City.  Following a campy 1950’s Ford television commercial, Adaku delivers a cynical and tough ode to The American Dream as she is now in New York City working at MetLife.  The play’s significance and the full potential of its power are revealed.

Mr. Pulos is the set designer as well and the stage is set with a bench and cubes that are a proven viable theatrical landscape for storytelling.  Barbara Parisi’s lighting design vividly conveys the dimension of the passage of time and the differing locales with its striking and precise variances.

Pulos’ projections are technically accomplished but their prevalence overwhelms the production. He is also the director and has adeptly staged the actors and has yielded wonderfully sensitive performances from them.

Jennifer Owusu as Saliya has a compelling sorrowful quality that perfectly suits the character.  Ms. Owusu wears several colorful African outfits during the show and does a terrific native dance. 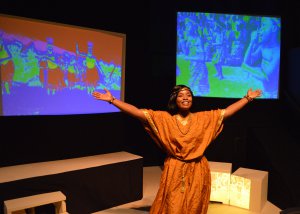 Jennifer Owusu as Saliya in a scene from “The Imaginative Space of the African Horizon” (Photo credit: Rick Pulos)

As Adaku, Lisandra Payan is charmingly feisty.  Ms. Payan expertly depicts the girlish joy of the character that changes to hard-edged pragmatism the longer she stays in New York City.

John Sannuto’s choreography is skillfully expressive and adds a lively sense of African feeling during the few dance sequences.

Though cumbersome in its presentation, at its core The Imaginative Space of the African Horizon has aspirational nobility that’s realized by the cast’s spirited performances.

The Imaginative Space of the African Horizon (through May 14, 2016)

For tickets, call 718 996-4800 or visit http://www.africanhorizon.brownpapertickets.com