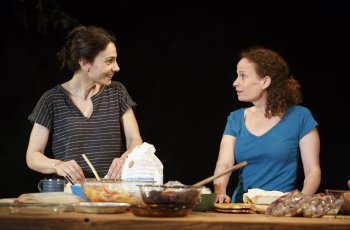 Rachel Hauck’s scenic design is the most outstanding feature of the interminable Antlia Pneumatica.  Ms. Hauck accurately and vividly represents the Texas ranch setting by an elaborate kitchen counter top in the center of the bare stage that is surrounded by shrubbery.  It’s very functional as much of the activities involve preparing a feast.

The play’s title is the name of a constellation and there is a digressive scene where two characters ramble on poetically in darkness with twinkling lights.  This also exhibits the atmospheric achievements of lighting designer Tyler Micoleau.

Sound designer Leah Gelpe aids the tedium with her accomplished efforts.  There is several voice over sequences that represent a character’s unseen children.  Apart from filling time these don’t seem to have much point.  One is of a little boy and girl painfully singing The Beatles’ “Yellow Submarine.”

A group of friends about the age of 40 reunite and reminisce following the death of one of them.  These themes and actions are reminiscent of Lawrence Kasdan’s 1983 film The Big Chill and plays by Lanford Wilson but with none of the charm or simple coherence of those works. 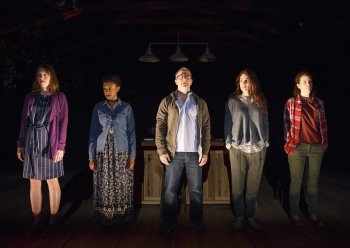 This play’s author Anne Washburn takes a proven dramatically fertile situation and renders it with pretentiousness and vagueness. The characters identities and relationships are not clearly explained.  Details and specifics are murkily imparted. There’s a lot of mundane prattling and one is left to vainly concentrate in order to decipher who is who and what is what.  The dialogue is arch and much of it is supposed to be funny.

All kinds of things go bad. Cold cuts go bad, I suspect there are cold cuts. I bet they’re very bad. I never know about mayo. You’ve got like six jars of mayo. I may cull some of them, just to feel like the situation is under control.

One character periodically launches into lengthy anthropological reveries about rural American customs “in the olden days” that may parallel the events of the play.

Two characters are sisters and an African-American actress plays one and a Caucasian actress plays the other. No reference is made as to the details of their births or parentage. 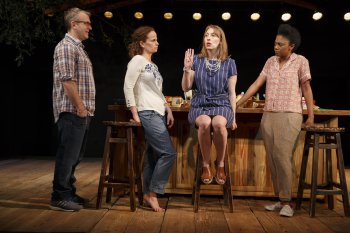 Near the end Ms. Washburn tosses in some tangential metaphysics with the deceased’s cremains mysteriously vanishing and the possibility that one of the characters is actually dead and has been a figment of the others’ imagination.  After an hour and forty-five minutes of insipidness these twists reek of desperation in order to conclude the play with some semblance of significance.

Washburn has the impeccable pedigree of a contemporary non-commercial playwright.  She has been showered with awards including a Guggenheim, residencies at MacDowell and Yaddo and numerous commissions by notable institutional theaters.  Creating a work of basic resonance appears to be an anathema to her.

The cast, Rob Campbell, Nat DeWolf, Crystal Finn, April Matthis, Annie Parisse and Maria Striar, are all capable actors.  However, with this material their performances uniformly consist of irritating tics and mannerisms.

Director Ken Rus Schmoll’s staging is adroit, aesthetically pleasing and most crucially makes the time pass by as best as possible.