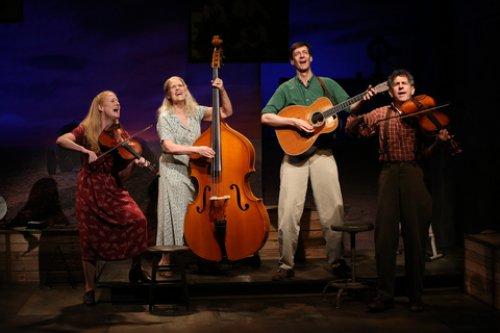 “This Train is Bound for Glory” opens the show and a reprise of “This Land is Your Land” closes it. In between, there are 40 musical selections that are representative of Guthrie’s work, and the eventful times he lived in. These include the “The Ballad of Tom Joad” songs inspired by novelist John Steinbeck’s masterwork, The Grapes of Wrath.

Physically lean, with gaunt but animated features, the immensely charming David M. Lutken plays the narrator and sings many of the numbers. Mr. Lutken magnificently captures the essence of Guthrie with his wry twang, beaming smile and dramatic presence. This dimension is complete when he puts on a blue cap like Guthrie’s iconic one. That image is on display onstage, with a cigarette dangling from the side of Guthrie’s mouth.

Helen Jean Russell, David Finch and Darcie Deaville appear with Lutken. They all sing terrifically and vividly portray various characters from Guthrie’s life. These include his relatives, those he encountered, and friends such as Will Geer and Pete Seeger.

The show was devised by Lutken with Nick Corley and Ms. Deaville, Ms. Russell and Andy Teirstein.

The script is an accomplished distillation of historical details that seamlessly blend with the songs into an engaging, informative and highly entertaining presentation. 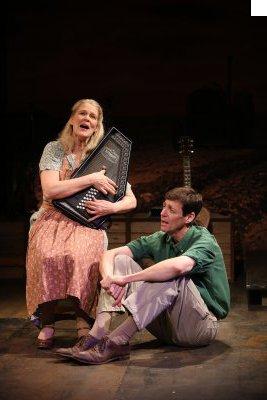 Lutken is also the music director and did the excellent orchestrations and vocal arrangements along with Ms. Deaville, Ms. Russell and Mr. Teirstein.

With clever simplicity, Mr. Corley’s lively direction propels the show during its two hours with an intermission. The musical numbers are perfectly integrated with the factual recitations.

Large vintage-looking photographs of sights from The Depression such as an old barn with a weathervane, a rural vista with clouds and a tractor, and a truck on a road are the stage’s back drop. Hanging from the ceiling are smaller photographs of Guthrie, his drawings and writings.

Scenic designer Luke Hegel-Cantarella’s commanding efforts also have the stage set with wooden trunks and a variety of musical instruments. Guitars, banjos, violins, ukuleles, a bass and a harmonica are all used at various times by the cast.

From homespun print dresses for the women to stylish casual wear for the men, Jeffrey Meek’s costume design authentically conveys a sense of the past. 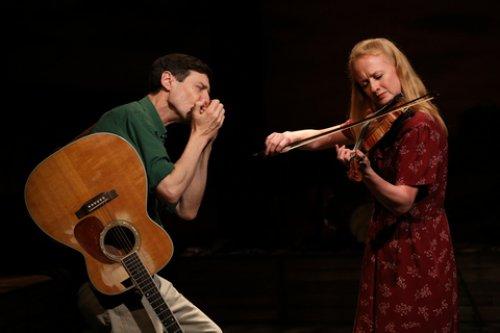 David M. Lutken and Megan Loomis in a scene from “Woody Sez: The Life and Music of Woody Guthrie” (Photo credit: Carol Rosegg)

Named for Woodrow Wilson, Guthrie was born in Oklahoma in 1912, and as a teenager moved with his family to Texas. His natural affinity for music led him to sing on the streets. After marrying for the first time at the age 19, he moved with his wife and children to California in the 1930’s and began appearing there on radio shows as a folk singer.

For a Communist newspaper, he wrote a column titled “Woody Sez.” “This Land is Your Land” was written in 1940 in reaction to Irving Berlin’s relatively saccharine “God Bless America.” He served in the Merchant Marines during W.W.W II, and was later blacklisted for his Leftist views.

In 1952 after years of deteriorating health, he was diagnosed with the neurological disorder Huntington’s Disease, the genetic illness that killed his mother. He died in 1967, at the age of 55, in the Creedmoor Psychiatric Center in Queens Village, New York. Before his death, the young Bob Dylan visited and was mentored by him. Bruce Springsteen is among the many notable singer-songwriters who cite him as an influence.

Besides its outstanding performances and technical achievements, Woody Sez: The Life and Music of Woody Guthrie serves as a living monument to the enduring greatness of Woody Guthrie’s songs and a reminder of his courageous life. His artistry resonates nearly 50 years after his death.

One bright sunny morning in the shadow of the steeple, by the relief office I saw my people. As they stood hungry, I stood there wondering if God Blessed America for me.

There was a big high wall there that tried to stop me. The sign was painted, said ‘Private Property.’ But on the backside, it didn’t say nothing. This land was made for you and me.

When the sun comes shining, then I was strolling, With the wheat fields waving, the dust clouds rolling, The voice come a-chanting, and the fog was lifting. This land was made for you and me.

Woody Sez: The Life and Music of Woody Guthrie (extended through September 10, 2017)