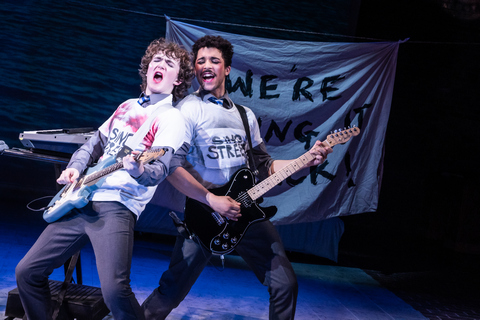 With Sing Street, the new musical is clearly that the New York Theatre Workshop’s hope that lightning will strike twice.  NYTW produced Once (2011), another Dublin-based musical, also, like Sing Street, formerly a film written and directed by John Carney.

Once not only made it to Broadway in 2012, but won the Tony Award for best musical.  Enda Walsh wrote the librettos for both Once and Sing Street, further strengthening NYTW’s hopes for Sing Street’s journey beyond NYTW’s East 4th Street theater.

Once featured an original score by Glen Hansard and Markéta Irglová including the hit “Falling Slowly.” Sing Street has a hybrid score combining new songs by Gary Clark and John Carney (who, along co-writing the story with Simon Carmody, wrote and directed the movie Sing Street upon which Walsh based his stage play) and songs of the period by Depeche Mode (“I Just Can’t Get Enough”), Duran Duran (“Planet Earth” and “Rio”), Heaven’s 17 (“Play to Win”), Japan (“Quiet Life”), Orchestral Manoeuvres In the Dark (“Souvenir”) and bits of Phil Collins/Genesis.

Sing Street begins as cast members open a large dollhouse to reveal Brendan Lawlor (Gus Halper in a calm, deep performance as the serenely wise center of the play). Brendan hasn’t been able to leave his home for months. He is the older brother of Conor (Brenock O’Connor, sensational as a confused, but strong-minded teen). 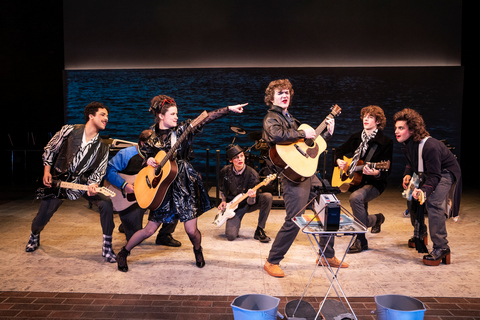 Their younger sister Anne (Skyler Volpe, whose breakdown late in the show is a highlight of the play), an architecture student, is the hope of her family which is in financial turmoil.  Robert Lawlor (Billy Carter, solid) is the out-of-work architect and father to the three rambunctious siblings.  He suspects that his wife Penny (Amy Warren, vivid in her portrayal of a troubled spouse) is cheating on him with her boss.

Sing Street is the name of the band that Conor forms, wittily dubbed after the Irish playwright John Millington Synge and the awful Catholic school that Conor is forced to attend due to his father’s financial difficulties.  The school is led by the sadistic Brother Baxter (Martin Moran, appropriately mean-spirited) who holds Conor’s fate in his hands, a power he clearly relishes.

The first day at school Conor meets the bully Barry (Johnny Newcomb, convincing), as well as the enthusiastic Darren (Max William Bartos, also convincing) who helps Conor form a band and shoot a music video.  Conor sees and is hypnotized by the luscious, prematurely sexy Raphina (Zara Devlin, lovely and mysterious) for whom he composes his first song with the encouragement of big brother Brendan.

“Riddle of the Model,” Conor’s first song, is a dreamy paean to Raphina who joins the taping of the band Sing Street’s first video along with fellow students who all play instruments.  (All but two cast members play instruments and sing.)  They wear the most colorful clothing they can find—Conor dons his mom’s pink coat—and garish makeup—typical of that period’s singing groups. 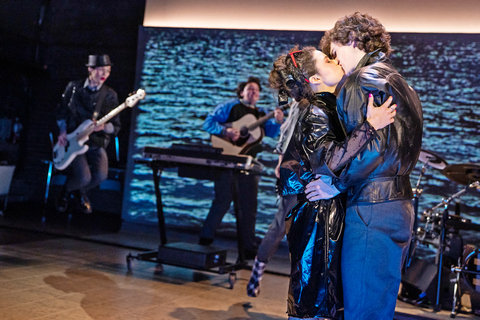 Joining the band, at the instigation of his mother Sandra (Anne L. Nathan in a strong, centered performance as the conscience of the play) is introverted Eamon (Sam Poon, who grows as the show progresses).  Eamon is emblematic of how this ad hoc band changes the lives of all its members and their family and friends.

Sandra, a piano teacher, is the godmother of the band and its sole defender.  She continually confronts Brother Baxter for his cruel treatment of the boys and the band which includes Gary (Brendan C. Callahan), Larry (Jakeim Hart), the Drummer (Anthony Genovesi) and impish Kevin (Gian Perez).

“Up,” Conor’s next number, is a charming love song, also dedicated to Raphina. “Look Now,” led by Raphina, is a sad song while “A Beautiful Sea” provides the occasion for an especially beautiful lighting effect (lighting designed by Christopher Akerlind).  The lead-in to “Girls” is an astonishing bit of theatrical wizardry.

The most beautiful song comes towards the end of the show:  “Dream for You,” an elegiac, wistful number that somehow encapsulates all the dashed hopes of each cast member.

Despite the inevitable unhappiness that envelops all concerned, Walsh’s Sing Street ends on an unbelievably upbeat note. 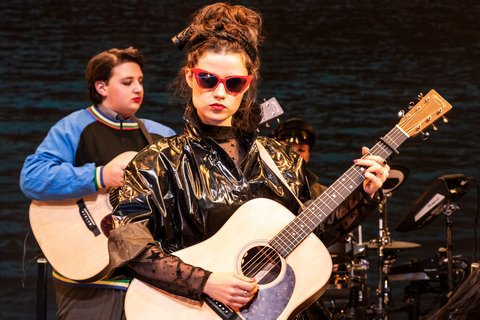 Rebecca Taichman (Indecent) directs with her usual attention to detail and character development.  That she decided, along with her creative staff, to place Sing Street in a vague space without any physical representations of Dublin doesn’t help the musical.

By stripping the story of local color—even the projections show little but an anonymous seascape—the creative team does ill by Sing Street.  Take away the Irish accents, the 1980’s songs and a quick reference to The Famine, and this story of alienated teens could have taken place in Boise, Idaho, or Buenos Aires, Argentina.  Let’s face it, the let’s-put-together-a-band-to-solve-our-problems was even a common theme in MGM films of the forties! (The original Sing Street movie, of course, was filmed in Dublin and was filled to the brim with local color and the grimness of economic distress.)

Sing Street isn’t quite the treat that Once was, but does have expressive songs and a cast of very talented performers who squeeze every bit of emotion from the songs and libretto.