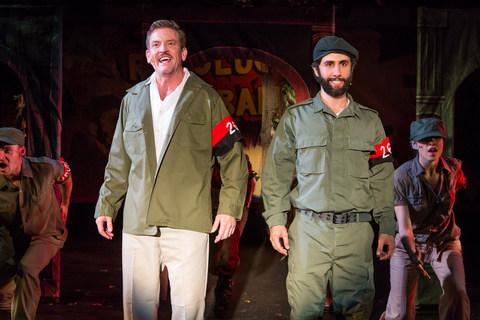 Jonathan Stewart as Flynn and George Psomas as Castro in a scene from “Errol and Fidel” (Photo credit: Jeremy Daniel)

With a clever premise and a lively score, Errol and Fidel is a quite entertaining musical fantasia when it features its well-played central characters.  Its pointless tangents mar its effectiveness.

By 1958, the swashbuckling stardom that the Australian-born Errol Flynn had attained in the 1930’s, with Captain Blood and The Adventures of Robin Hood had long since waned.  Instead of being on Hollywood soundstages, he was in Cuba filming a self-produced B picture, Cuban Rebel Girls.

There he met and was impressed by the revolutionary Fidel Castro.  Flynn became an ardent admirer of his, speaking out on his behalf and writing newspaper columns in support of him in The Untied States.  He eventually soured on Castro and died son after in October 1959 at the age of 50.

Boyd Anderson and Guy Anderson’s wayward book uses these historical facts to weave a fitfully compelling scenario.  The weary Flynn meets the fiery, young Cuban woman, Lola in a nightclub.  There are romantic sparks and he follows her into the wilderness.  She has been romantically involved with Castro, and she introduces the two.  They hit it off and Castro fantastically wants to make Flynn his Minister of Information.

Along the way, we learn that Lola is actually a CIA operative.  There are painfully unfunny scenes in Washington, D.C., with CIA agents plotting “Operation Cha-Cha-Cha.”  These include a production number set in a men’s room with black-suited agents tap dancing at urinals.

The Andersons also have an overused framing device with a salty, old Cuban woman named Mima reappearing.  She is Lola’s grandmother and pops up with jokes. She and Lola sing a nice and wistful but overlong ballad about hoping to immigrate to Miami, Florida. 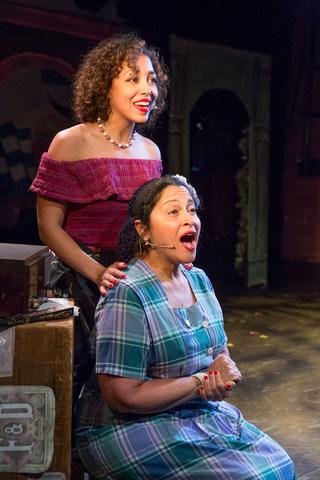 Claire Saunders and Sydia Cedeno in a scene from “Errol and Fidel” (Photo credit: Jeremy Daniel)

Though the book is cluttered, the score is lively. Peter Kaldor, John Kaldor and Doug Oberhamer’s music is a breezy amalgam of Burt Bacharach, salsa, and pop and show tunes.  Boyd Anderson’s lyrics have a modest flair.  The game cast acquits themselves very well with the erratic material.

Conveying the premature decrepitness of Errol Flynn with flair is Jonathan Stewart. His hair styled and with a thin mustache, the charming Mr. Stewart resembles Flynn and channels his dissolute persona and good humor with a melodious, slight Australian accent.

The bearded and youthful George Psomas totally captures the look and essence of the early Fidel Castro with his edgy bearing.  Combining sensuality, a lush singing voice and superior comic timing, Mr. Psomas is delightful.  He and Stewart’s scenes together energize the show, particularly their clash near the end.

The animated Claire Saunders is comedic and dramatic as the frisky Lola.  Sydia Cedeno is hilarious as Mima and richly performs her moving moments.  Cole Grissom vividly makes the most of his stock character of the Flynn’s fast-talking Hollywood agent Sidney.  Alan M-L Wager and Ryan Bauer-Walsh are suitably cartoonish as the CIA agents.

Errol and Fidel is presented as part of the 2017 New York Musical Festival.  This annual event showcases a wide selection of emerging works that are given small-scale productions as a testing ground for the future. 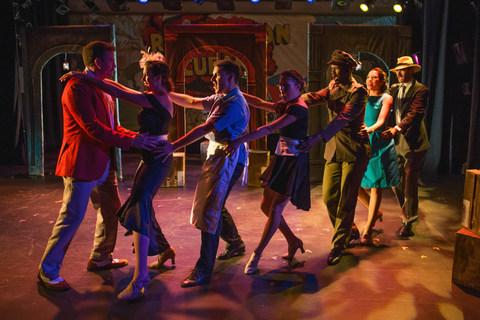 The cast of “Errol and Fidel” (Photo credit: Jeremy Daniel)

A gorgeous comic book-style painted backdrop evokes the tumultuous era of revolutionary Cuba and is the chief component of Starlet Jacobs’ inventive scenic design.  This is complemented by three small arches, wooden boxes and minimal props.

Director Michael Bello holds all of the production elements together with his swiftly paced and forceful staging.  The Cuban locale is smartly realized and there’s an overall enjoyable blend of the lighthearted and the serious.

This exploratory presentation of Errol and Fidel reveals it to have a good deal of potential.