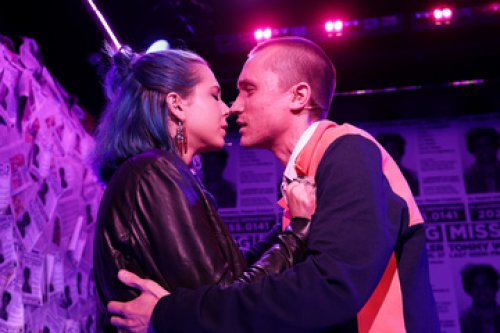 From its off-kilter opening to its protracted strained finale, the earnest Young Adult-style musical Contact High: A New Musical unsatisfyingly plays out. Its potential as a Youthquake event à la Hair, Rent, Spring Awakening and Dear Evan Hansen is undercut by an overstuffed plot and presentational flaws.

Contact High’s book, music and lyrics are written by recent college graduates Kyle Reid Hass and Jeremy Swanton.  Their busy scenario is a heartfelt treatment of adolescent angst with melodramatic plot twists. Their rock-themed score has some catchy numbers, fine stand-alone numbers and decent filler. However, several dramatic power songs are beyond the vocal capabilities of the performers. Mr. Hass and Mr. Swanton each also play pivotal roles.

Hass directed and his stilted staging is adequate. Simple entrances and exits, cast members going through the theater’s aisle and basic character interactions occur. Some performances are excessively broad diluting the narrative’s impact. Playing a major part in a show as well as directing it is problematic. Hass’ joint choreography with Dana Norris is an uninspired series of rudimentary movement, jumping up and down, moving wheelie chairs around and clunky robotic flourishes. Hallowed masterpieces of musical theater are often alchemical artistic collaborations among a creative team. Without experienced objective directorial oversight, Contact High is lumpy.

At Plainview High School in Illinois we meet seniors Benjamin and Jean who are in love. Their plans are for Benjamin to go to Princeton. In order to pay the tuition, they sell drugs at school for the brutal kingpin Landon Casey. He happens to be Jean’s father and she is a heroin addict. The mystery of missing student Tommy Wheeler looms over the school. Haley Walter Keys is a troubled science genius suffering from haphephobia, a fear of being touched. To pay off a large debt, Haley teams up with Jean (who is seeking retribution for getting shortchanged on a drug deal) to rob Casey’s safe. Then there are conflicts among members of the school’s science team and an upcoming competition. This dense tale with shades of film noir is neatly resolved in the end. The tone is a wildly varying blend of drama, comedy and sincerity. 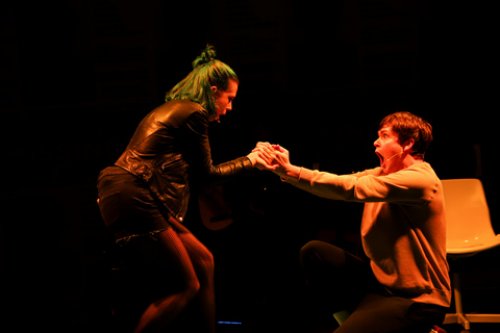 Hass is appealingly quirky as Haley. Swanton is boyishly charming as Benjamin.  Gabriella Marzetta brings suitable toughness and poignancy to her part of Jean. Playing the dual roles of the hollow vice principal and the vicious drug lord is E.B. Hinnant who exhibits range. Laura Thoresen does wonders with her portrayal of a concerned student. The peppy company also includes Erika Reyes, Keith Mankowski, Dana Norris, Iyana Colby and the magnetic Johnny Rabe.

Apart from some chairs, the only scenic design is the effective wall paper composed of a multitude of wanted posters for the missing Tommy Wheeler. It makes an evocative backdrop for the ensemble and the terrific band that’s in view onstage. Andrew Garvis’ cool lighting design serves the production well with its bracing fluctuations.

“We’ve tried to tell a story young people in 2019 can relate to – giving dignity, strength, and eloquence to our characters 18 and under,” says Hass of Contact High: A New Musical. It’s possible that audiences of that age category might find it to be significant entertainment.