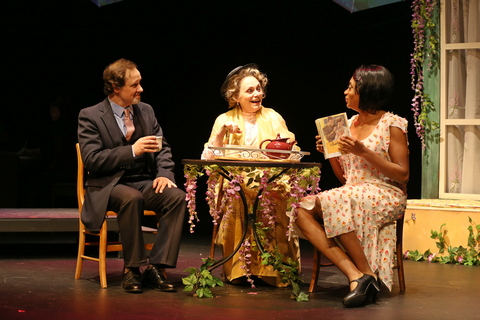 The enduring resonance of its source material is evident in An Enchanted April during this uneven stage musical adaptation. Lasting two hours and 45 minutes with an intermission, its initial frothiness gradually fizzles. The bright score is excessive, the solid book rambles, and the production is more dutiful than inspired. However, the performances are engaging, and the piece’s emotional power is palpable. The show was originally presented by the Utah Lyric Opera and this New York City premiere demonstrates its potential.

In rainy London, 1922, we meet the chatty Lotty Wilkins and the stern Rose Arbuthnot who are members of a ladies club but have never conversed. After a tense introduction, these young women whimsically agree to rent an Italian villa for the month of April, to escape their strained marriages. To defray the costs, they place a newspaper ad for two more participants. These end up being the 60ish battle-axe Mrs. Fisher and the 28-year-old world weary Lady Caroline Dester. She has been traumatized after serving as a nurse during W.W. I and is vacillating about marrying a wealthy young man she doesn’t love. Tempers flare, secrets are revealed, and Lotty and Rose’s husbands show up at the villa. How will it all play out? The psychological aftermath of W.W. I’s tragic events loom over the characters.

Co-lyricists Elizabeth Hansen and composer C. Michael Perry’s score with its appealing melodies and artful lyrics recalls the manner of Jerry Herman. However, with an overture, an entr’acte and several extraneous character songs, its potency is diminished. That the compositions are performed on piano and a synthesizer that are on view is symptomatic of the lack of aural and visual grandeur on display. Ms. Hansen’s book is faithful to its derivation, has wit and dramatic heft, but repetitiveness creeps in causing slackness. An Enchanted April’s foundation is shaky. 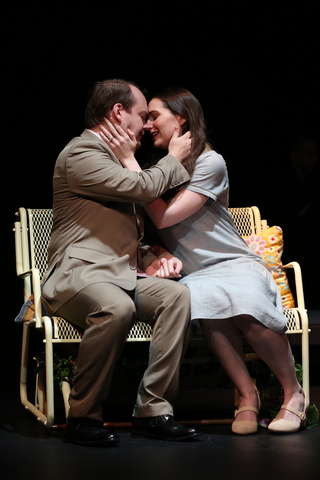 Aaron Phillips and Christina Cole in a scene from the new musical “An Enchanted April” at Theatre Row (Photo credit: Carol Rosegg)

Nevertheless, the actors do bring as much dazzle as they possibly can to the show. Sunny and with wonderful comic timing, Leah Hocking is a heartwarming Lotty. Christiana Cole’s reserve and resolve perfectly convey Rose’s complexities. Gena Sims’ Lady Caroline is an alluring blend of haughtiness, melancholy and pointed humor.

Harrumphing about with a cane and repeatedly bellowing “In my day…” is that magnetic stage veteran Alma Cuervo as Mrs. Fisher, the Victorian gorgon with a heart of gold. This role brought Joan Plowright an Academy Award nomination for Best Supporting Actress for the 1992 film version. Ms. Cuervo is comparably formidable, and her sensational performance is a chief asset of the show. 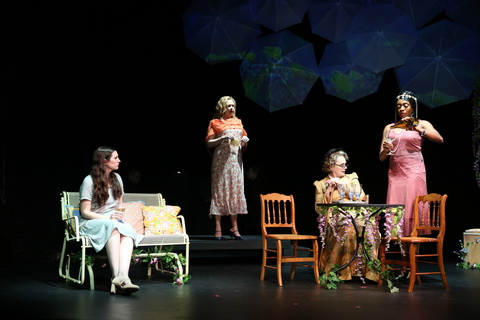 As the two husbands and owner of the villa, Jim Stanek, Aaron Phillips and Peter Reid Lambert all bring requisite emotion and charm to their veddy British characterizations. Melody Meeks Putnam brings subtle hilarity to the part of the animated housekeeper who only speaks Italian and bangs a gong to announce meal-times.

Published in 1922, English novelist Elizabeth von Arnim’s The Enchanted April, was a bestseller in Great Britain and the United States. It’s been adapted several times for the stage and screen. The most notable one is director Mike Newell’s popular 1992 film incarnation written by Peter Barnes. Though not fully realized, An Enchanted April has its virtues.