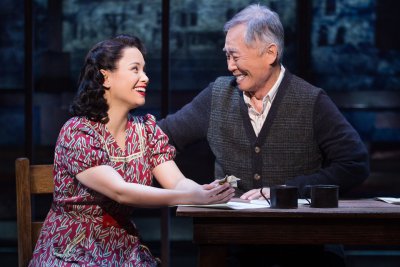 Inspired by George Takei’s experiences in a Japanese internment camp during World War II, Allegiance is a sometimes moving, sometimes stodgy musical about this terrible injustice perpetrated against Japanese-Americans.  One hundred and twenty thousand Japanese-American men, women and children, classified as “enemy aliens,” were forcibly removed from their homes and businesses and incarcerated under terrible, inhumane conditions, far from their West Coast homes.

Takei, famous for his role of Sulu on the original Star Trek, went through this ordeal with his family.  He managed to survive and prosper, but many others perished or were forever psychologically, emotionally and financially scarred.

Allegiance focuses on the Kimura family, farmers in 1941 Salinas, California, who couldn’t foresee the catastrophe awaiting them after the bombing of Pearl Harbor.  Tatsuo Kimura (Christòpheren Nomura, stalwart, with an impressive baritone) is the patriarch of the family.  His daughter, Kei (Broadway star and Tony Award winner, Lea Salonga), son, Sammy (Telly Leung) and Ojii-chan/Grandfather (Takei, who also plays Sammy as an old man) have their little tensions involving Kei’s objections to taking on the role of mother to her sibling and helpmeet to her widowed father, and Sammy’s reluctance to fulfilling has father’s desire that he become a lawyer.  Their personal plans are disrupted by the Congressional decree that allows them—despite being American citizens—to be separated from their property and their community.

Allegiance, framed as a flashback as told by the now aged Sam, follows them through their many travails:  the trip to Wyoming; the indignities of everyday hygiene; getting enough food; illnesses and insufficient medical staff and equipment; the protests for better conditions; the demands to join the army (which some, particularly Sammy, do eagerly to prove their “Americanism”); and the schism between political factions that will split the Kimura family.

Creators of stage work face a vexing conundrum when attempting to portray suffering of this immensity:  Do you go for realistic or symbolic representation of the deprivations and the physical scourges inflicted on the victims?  A musical, in particular, is meant to entertain first, enlighten later.

Telly Leung and the cast in a scene from “Allegiance” (Photo credit: Matthew Murphy)

By concentrating on a single family and their small community, the authors manage to convey the suffering of all the detainees.  Marc Acito and Lorenzo Thione (book) and Jay Kuo (book, music and lyrics) have written an old-fashioned, occasionally inspiring, musical which movingly personalizes this blot on American history while walking a fine line between their duty to entertain and telling it like it was.   Some of the numbers and the choreography by Andrew Palermo are clearly influenced by stylized Japanese art forms (“Wishes on the Wind,” “Ishi Kara Ishi” and “Gaman”); others by Western dance music (“442 Victory Swing”) and Broadway ballads and anthems (“Our Time Now,” “With You” and “”Stronger Than Before”)—in other words, a melding of Eastern and Western cultures of the 1940’s that keep Allegiance from making the Japanese simply noble figures and the Caucasians evil ones.

The entire cast sings, acts and dances well.  Mr. Nomura has grandeur as he takes a stand against the government.  As Frankie, the ringleader of a small protesting group and Kei’s love interest, Michael K. Lee sings well and has a wiry elegance.  Katie Rose Clarke as the nurse, Hannah, the lone sympathetic white character, sing and acted with passion, particularly after her character is paired romantically with Mr. Leung’s Sammy.  Greg Watanabe had the difficult task of making government apologist Mike Masaoka sympathetic, but he manages to show how frustrated he was and still have some dignity.

Lea Salonga grows beautifully into what first appears to be a thankless role.  Her inner conflicts and devotion to her family are given beautiful voice in her songs.  Telly Leung, boyishly handsome, with a pop tenor voice, matures before our eyes in a demanding part.

George Takei has a strange way of growing on you.  Even when he is the sullen older Sam he is movingly human, his face registering warmth and pain.  He is heartbreaking in the finale of the play.

Stafford Arima’s direction keeps all the plot lines clear, smartly speeding things up in the second act so that when all the emotional threads are woven together, the effect is quite moving.