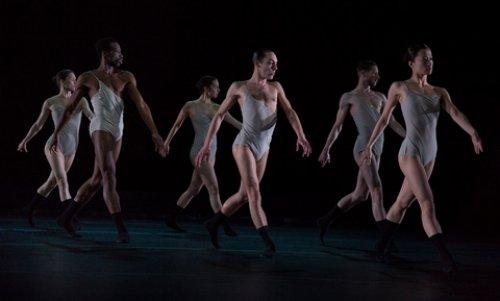 The Artists of L-E-V in a scene from Sharon Eyal and Gai Behar’s Love Chapter II” at The Joyce Theater (Photo credit: Yi-Chun Wu)

“How do they remember how to do all those steps?  They all look alike!” said the person sitting in front of me at the opening night of L-E-V:  Love Chapter II.  This thought was bantered about as the audience left, not how the work affected them, which says something about this dance work.

The six dancers of L-E-V withstood all the challenges presented them in “Love Chapter II” choreographed by the troupe’s directors, Sharon Eyal and Gai Behar, a 55-minute work purported in the program notes to be “an unflinching examination of the isolation and loneliness that occurs when we lose our connection to one another.”

This is not what I saw on the stage of the Joyce Theater, and obviously not what many members of the audience saw. Gon Biran, Rebecca Hytting, Mariko Kakizaki, Darren Devaney, Keren Lurie Pardes and Clyde Emmanuel Archer paraded about looking like a tribe of exuberant showoffs: think of the squiggly, slouching choreography of Twyla Tharp combined with stylized mime. 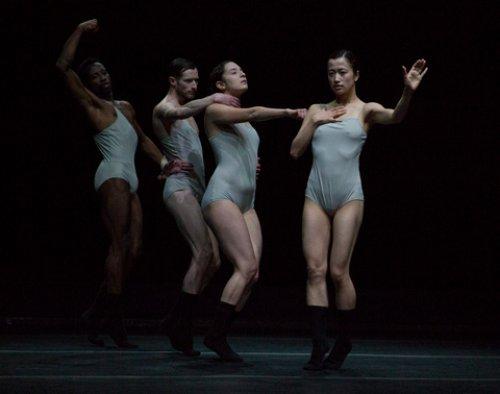 The Artists of L-E-V in a scene from Sharon Eyal and Gai Behar’s Love Chapter II” at The Joyce Theater (Photo credit: Yi-Chun Wu)

There was no sense of alienation, just a series of sexy, undulating show-off solos.  This was not a portrait of people who were lonely or have lost connections with each other.  Quite the contrary:  they moved as a unit for most of the work, breaking off into voguing solos, showing off self-love to the point of kissing and touching parts of their own bodies.  In fact, self-touching became a movement motif throughout the work: belly rubbing, head-holding, poking, etc.

Casual strolling was suddenly punctuated by dancers bumping and grinding at each other, these full-bodied movements resonating in slightly different ways in each dancer, sometimes leading to entwining, slithering, sweaty duets.  Faces displayed over-the-top grimaces and uneasy forced smiles which led to desperate, phony-sounding laughing.  Arms were swung or used to produce angular silhouettes with studied nonchalance. Bodies twitched and twisted to staccato beats—music composed and arranged by Ori Lichtik whose score for “Love Chapter II” began with barely audible electronic beats which grew in volume and speed until the score suddenly became a Latino Cha-Cha to which the dancers seemed to glory. 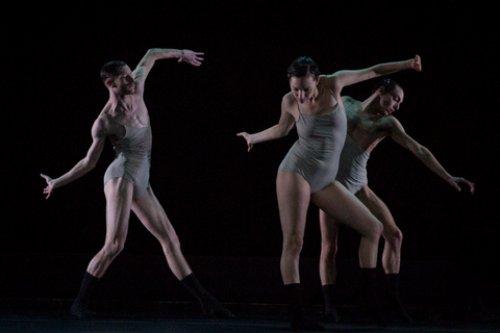 The Artists of L-E-V in a scene from Sharon Eyal and Gai Behar’s Love Chapter II” at The Joyce Theater (Photo credit: Yi-Chen Wu)

Had the pretentious program notes not tried to lead the audience, “Love Chapter II” might have been taken as a study in individuals not able to withstand the gravitational pull of the tribe.

The dancers were all extraordinarily into the choreography, giving it life and whatever meaning could be gleaned from the limited movement vocabulary.

The costumes designed by Odelia Arnoldi, Rebecca Hytting and Biran consisted of pale underwear tops and, for some reason, ugly black socks that cut the line of the leg at the calf.

Alon Cohen’s lighting was terrific, making all the repetitious steps look fresh with its dramatic use of light and shadow.

Running time:  55 minutes without an intermission