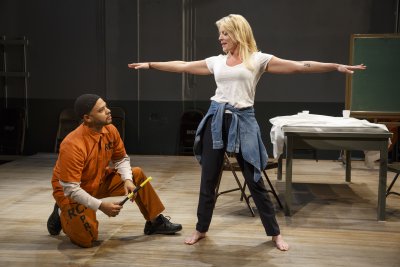 Ryan Quinn and Sherie Rene Scott in a scene from “Whirl Inside a Loop” (Photo credit: Joan Marcus)

These traits certainly apply to The Volunteer, a leading character of the very entertaining, inspirational, and cleverly conceived play Whorl Inside a Loop written by Dick Scanlon and Sherie Rene Scott.

The Volunteer is a successful musical actress currently appearing in a Broadway show. She is at a New York State maximum-security prison.  It is her first day there to teach a twelve-week theater performance course to six convicted murderers.  During the entrance security check she has to be fingerprinted and the finger printer observes the significance of the pattern of her thumb at the beginning of the play.

“Theatricalizing the Personal Narrative” is written on the blackboard in the room where the workshop takes place and is its subject.  Each of the six African-American male prisoners delivers often searing monologues detailing their lives and the crimes that led them to being incarcerated.  Also discovered is what The Volunteer’s reason for doing this is.

The well-meaning female warden, guards and other teachers are also encountered.  Outside of the prison we meet the major figures in The Volunteer’s life.  These include her husband, her young son, her wisecracking gay hairdresser, her lawyer, her pragmatic producing partner, and New York State Senator Hillary Clinton at a hair salon.

Mr. Scanlon and Ms. Scott previously collaborated on Everyday Rapture, an autobiographical Broadway musical based on her life as a performer.  Here they inventively expand upon true events to create this fascinating show.

They did teach such a course at a New York State prison and later developed their experiences into this fictionalized presentation that incorporates actual prisoners’ accounts into the narrative. 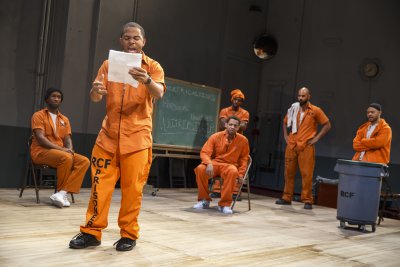 As The Volunteer, Scott exhibits the luminous stage presence that has made her a celebrated performer.  She is blonde, bubbly and possessed of a distinctive whispery voice that has perfect comic and dramatic timing. Significantly in terms of writing and performing, she unabashedly embraces the character’s negative features and creates a very realistic portrayal of a conflicted opportunistic show business type.

The direction by Michael Mayer and Mr. Scanlon is fast-paced, mining the humor of the situations without diluting the drama. Their staging also involves crisp transitions between scenes. The material is energetically presented often with immersive effects such as cast members making appearances in the theater’s aisles and entrances and exits through the audience.

Co-scenic designers Christine Jones and Brett Banakais have creatively configured the stage into a huge, airy and drab space surrounded by gray, and strewn with metal folding chairs, trashcans and old tables.  These simple touches brilliantly dramatize the sense of the stifling institutional environment of a prison.  Other locations such as The Volunteer’s house and the hair salon are artfully suggested.

The accomplished lighting design of Donald Holder adds considerably to the theatrical effects. Striking blackouts and varying degrees of brightness and dimness frame the prisoners as they tell their stories and also transport the action between the prison and other locales. 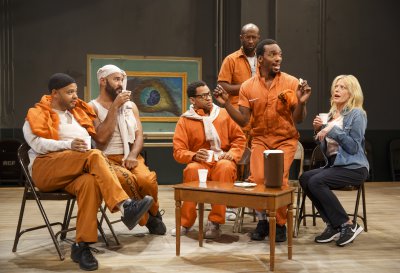 With the familiar orange jumpsuits as the requisite starting point, ESosa’s costumes for the ensemble are wittily mutable to quickly suggest the many characters being depicted.  A nun’s habit is among the highlights of these inspired creations.

Though it can be interpreted as a pro-rehabilitation tract, the play never descends into agitprop.  The authors make it quite clear that five of these people were guilty of homicide.  In one case the suspense of whether a convict will be paroled is undercut without specifics by the knowledge that his crime was so particularly horrendous that it is unlikely that he will ever be released early no matter how positively he has changed. The noble and sympathetic concerns of the authors are always matched with raw truth.

Whorl Inside a Loop also has the credit “Additional material by Andre Kelley, Marvin Lewis, Felix Machado, Richard Norat and Jeffrey Rivera.”  These are the names of the inmates Scanlon and Scott met and whose stories were shaped into this compelling, provocative and vivid play.