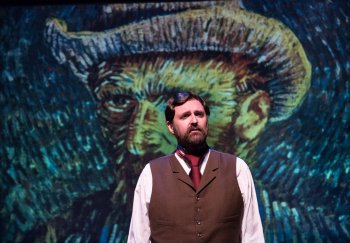 Leonard Nimoy’s passionate solo play Vincent is set in a Paris lecture hall in 1890. There the Dutch-born Vincent van Gogh’s four year younger brother Theo, recounts the great artist’s life shortly after his suicide in France at the age of 37.

The bearded and personable James Briggs with his light and expressive voice and nimble physicality gives a very engaging performance that holds attention.

Mr. Briggs skillfully conveys emotion, humor and pathos during this biographical chronicle. In addition to depicting Theo, an eminent art dealer and his brother’s financial and emotional protector, he at times portrays Vincent, vividly capturing the essence of both.

Over 100 beautiful and haunting images of Van Gogh’s paintings are projected onto a large screen surrounded by a vintage gold frame that serves as the stage’s backdrop during the engrossing 85 minutes of this very well executed production.

Nimoy (1931-2015) was best known for creating the role of Mr. Spock on the original Star Trek television series that aired from 1966 to 1969, as well in its several film sequels.  Before and after attaining fame in that part, he had an extensive stage career.

In the 1970’s, he bought the rights to the solo play Van Gogh written by Phillip Stephens.  Nimoy kept the structure of that play but extensively rewrote it drawing on the approximately 500 letters between the two brothers.  From 1978 to 1981, he toured 35 cities in the U.S., giving 150 performances in it, later recording a video of it for cable television.

The play weaves Vincent’s often harrowing letters to Theo with his brother’s observations.  Through this format, the painful though productive life of Vincent is explored.  Besides displaying the paintings there are also illustrative slides of people in Vincent’s orbit such as his parents, a girlfriend, and friends and reproductions of negative art reviews of his work.

The material has been expertly fashioned into an informative and moving narrative where both brothers’ lives are compellingly presented.  Most effective is the poignant concluding sequence describing Vincent’s funeral and its aftermath. 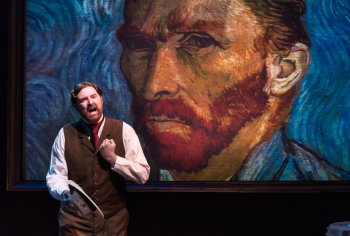 A small glass vase with two sunflowers on a round table, a red velvet wingchair, an antique desk, an easel, a small table with paints and brushes are among the detailed pieces of the well-chosen scenic design.  This is the work of actor James Briggs who is also the sound designer. From the opening portions of Satie and the later classic music that is played along with the sound effects, his efforts in this field are equally proficient.

Scott Pinkney’s inventive lighting design emulates the style of its subject with hues of orange and red alternating with straightforward varying degrees of brightness.  This creates a dynamic visual dimension that complements the emotional tones and chronological aspects.

The tale of this tortured genius grappling with mental problems, poverty and scorn while creating hundreds of stunning works remains powerful.

Leonard Nimoy intended Vincent as a vehicle for himself that would showcase his talents.  In this Off-Broadway premiere presented by Starry Night Theater, Vincent is now such an outlet for Nimoy’s worthy successor James Briggs in this entertaining and insightful production.