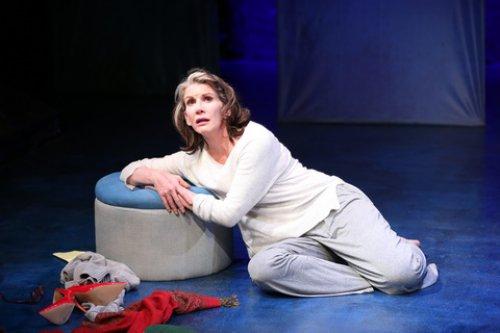 The enchanting Melissa Gilbert’s hilarious and touching performance as a newly single woman is showcased in My Brilliant Divorce, a sparkling solo play by Irish playwright Geraldine Aron.  Ms. Aron’s engaging blend of comedy and seriousness recalls the spirit and achievements of Neil Simon at the height of his powers.

The sharp humor, precise details and focused structure that universally dramatized the human condition in Barefoot in the Park, Plaza Suite, The Last of the Red Hot Lovers and Chapter Two is marvelously to be found here.

The lithe and silvery-haired Ms. Gilbert dazzles for 90 minutes as she addresses the audience directly with her warm and joyous presence. She tells jokes, sings, and dances, all while conveying pathos.  In addition to her vivid primary characterization, she portrays 16 other characters of various ages and nationalities with a commanding assortment of dialects and physical traits.

Rachel Lipsky Haringay is a pampered middle-aged former New Yorker and former window dresser living in present day London. She met her British accountant husband Winston (nicknamed Roundhead) of over two decades when he was in New York City on a vacation and they quickly married.

He has now announced that he is leaving her for a younger woman. Rachel isn’t so devastated as the couple had been drifting apart for some time, but being single again is jolting. Her 19-year-old daughter has also left to live with her boyfriend, the rock band drummer Hotstix Moltino.

Over the course of three years we follow Rachel’s path of self-discovery and enlightenment with her steady companion, a small white dog named Axl, who is represented by a stuffed animal. 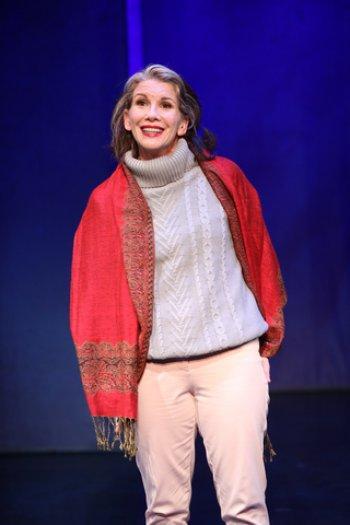 It’s sad, but at a certain age, you have to let go of certain dreams.

I will never now be a cheerleader.

I will never design a Bloomie’s window.

I will never have a proper wedding, with six bridesmaids and a big white dress. Although I did wear big white dresses for my bat mitzvah and my prom, I was married in a beige pants suit.

And that wasn’t the only bad omen. When Roundhead and I got engaged, we were playing miniature golf and I accidentally whacked him in the ankle with my putting iron. He whacked mine back on purpose. And I went ahead and married him.

Ms. Aron fills out her simple, familiar and well-observed scenario with a lot of gags, surprises and witty insights. Dating, therapy, hypochondria, sex toys, a job in a pharmacy, vacationing alone, suicide hotlines and finding a new love are among the situations Gilbert confronts with caustic flair.

Through recordings, eleven other characters are represented. Though in the grand tradition of stereotypical, imperious Jewish mothers, Rachel’s is rendered with great depth.

Director Aedín Moloney’s breezy yet sensitive staging makes for a comical, thoughtful and pleasing presentation. Ms. Moloney skillfully has Gilbert in constant motion while accompanied by the accomplished technical components.

Shimmering blue cloth panels on which atmospheric images are projected occasionally are the chief feature of John McDermott’s clever and spare scenic design. Gilbert often weaves in and out of these to denote new locales and for dramatic effect. 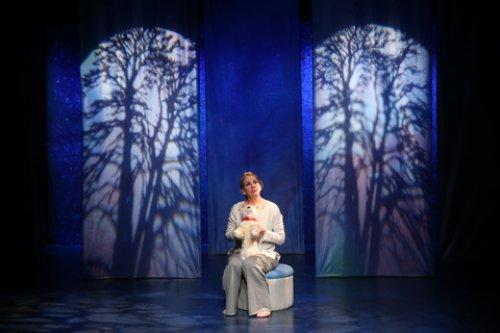 Besides the funny recreation of a dog, the stage is set with props designer Eileen Connolly’s other artful handiwork. There’s a red cart, a phone and a small round hassock with a lid that opens so that other items can be taken out for use.

Lighting designer Jessica Kasprisin’s varying colorful and dim hues perfectly evoke the piece’s emotional and temporal tones as well as the places in the narrative.

Rachel’s oversized gray turtle neck sweater and beige slacks are part of the stylish ensemble costume designer Nikki Delhomme has created. A bold red shawl gets a lot of use as well.

My Brilliant Divorce debuted at Ireland’s Druid Theatre in Galway in 2001, starring Glenne Headly. The 2003 London production starred Dawn French and was nominated for the Olivier Award for Best Entertainment.  The play has been performed internationally and this Fallen Angel Theatre Company production is its New York City premiere.

Melissa Gilbert’s brilliance combined with Geraldine Aron’s delightful writing and the exceptional production all make My Brilliant Divorce an upbeat entertainment of substance.