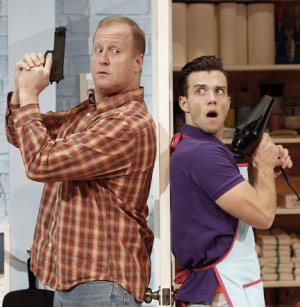 Patrick Noonan and Jordan Ahnquist in a scene from the New York production of “Shear Madness” (Photo credit: Carol Rosegg)

The reclusive owner of the Hell’s Kitchen apartment building that houses a hair salon has been viciously murdered.  Two detectives are on the scene to investigate and to interrogate the four suspects.  These include the salon’s flamboyantly gay owner, an outer-borough female employee, a haughty society woman, and a shifty businessman.  This is the premise of the regionally long-running play Shear Madness making its hilarious New York City premiere Off-Broadway.

The energizing conceit of the play is its reliance on audience participation that adds considerably to the entertainment.  During the action, the audience gets to ask questions of all those involved and at the intermission a detective is in the theater’s lobby to confer with.  It all means that the actors besides sticking to the script must also improvise a great deal.  This breaking of the “fourth wall” is done very cleverly and believably.  The audience also votes on who the killer is based on all of the facts that have been presented.  Therefore, each performance varies based on those in attendance.

The play has been tailored to reflect the locale with the salon’s address noted as 50th Street and Ninth Avenue in Manhattan.   It is also kept conversationally up to date with a multitude of jokes involving topical references that included Donald Trump, Al Roker, Anthony Weiner, Yelp, The Kardashians, Chipotle, Chris Christie, Subway Guy Jared Fogle, and Ninth Avenue’s notorious traffic.

Patrick Noonan plays the lead detective Nick O’Brien with tremendous presence and assurance.   The quick-witted Mr. Noonan really has to steer the show and he winningly does this with his great comedic timing, terrific improvisational skills, everyman persona, and by blowing a police whistle to establish order.  Noonan has played this role before in several cities and his expertise is a great asset to the success of this production.

With the drive of Jim Carrey at his most frantic, Jordan Ahnquist plays Tony Whitcomb, the owner of the salon with relentless flair.  Mr. Ahnquist unabashedly embraces every clichéd stereotype of the gay male hairdresser, turning in a delightfully animated and often hysterical performance. “I’m not the stereotype.  I’m the prototype!” he declares indignantly.  His eyes rarely cease popping and his body virtually never stops moving.

Lynne Wintersteller regally captures the superiority and grandeur of the sleek socialite Mrs. Shubert.  When asked by an audience member at the performance attended why her affluent character travels all the way from Park Avenue to Ninth Avenue to get her hair done, in a split second Ms. Wintersteller did a priceless double take worthy of Jack Benny before launching into a plausibly comic explanation.  She also tosses off numerous malapropisms with subtle glee such as “Andrew Dice Webber.” 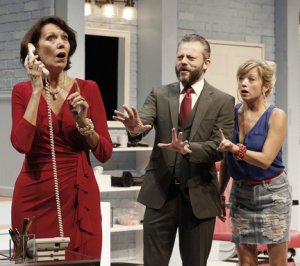 Bearded and dressed in a pinstripe suit, Jeremy Kushnier skillfully conveys the odiousness and constant duplicity of wheeler-dealer Eddie Lawrence.  As a prime suspect, Mr. Lawrence is besieged by questions from the police as well as the audience and he is indomitable.

The fast-paced direction of Bruce Jordan mines all of the comedy from the situations but also switches gears periodically to simulate the serious tone of a police procedural.

Scenic and lighting designer William E. Cotton has fabulously created a richly detailed duplication of a typical hair salon.  Seemingly functional dryers, sinks for shampoos, a reception area, a storage room, hallways, and the front door are all on display.  There are also a number of doors that frequently slammed in this farce.

Rodney Harper’s costumes are a fine collection of garments that instantly render the characters visually.  Bruce Landon Yauger’s sound design expertly presents a large number of classic pop songs played during the pre-show’s zany silent slapstick and at transitions add to the merriment.

In 1963, the German dramatic writer Paul Pörtner (1925-1984) wrote the play Scherenschnitt oder Der Mörder sind Sie which translates to Papercut or The Murderers Are You.  In this interactive murder mystery the audience is involved and solves the case.  It was widely performed in Germany and internationally.  The United States rights were obtained by Marilyn Abrams and Bruce Jordan and their adaptation entitled Shear Madness opened in Boston in January 1980 and a Washington, D.C., production opened in August of 1987.  Both of these incarnations are still running making this one of the longest running plays in the world.  The New York version has been revised by Jordan and Bobby Lohrmann.