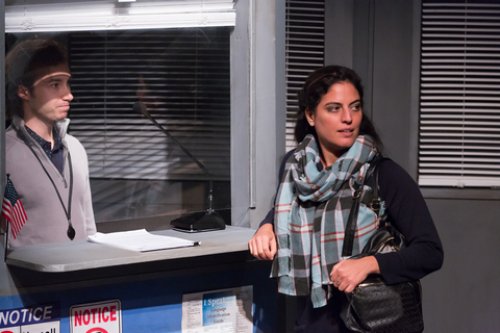 Wesley Zurick and Soraya Broukhim in a scene from Cat Miller’s “The Hope Hypothesis” at The Sheen Center for Thought & Culture (Photo credit: Beowulf Sheenan)

“I’m literally in a Kafka novel!” cries Brendan (Charlie O’Rourke) in The Hope Hypothesis, a sharply satirical new play, written and directed by Cat Miller and presented by the Voyage Theater Company.

He’s right on the mark. Miller’s dark comedy (or farcical tragedy, depending on how you squint) illustrates beautifully the ways in which bureaucracies can grind down the people they are supposed to serve.

The string of administrative mishaps in the play begins at a governmental office (something like the DMV, the script explains, but not the DMV), where Brendan’s girlfriend, Amena (Soraya Broukhim), a Syrian-born immigrant and law student who has been in the U.S. for decades, is asked by a teller (Wesley Zurick) to present her birth certificate. Hesitant at first, she eventually gives him a document that alarms the worker. It appears to display an ISIS logo.

Before long, various malfunctioning human cogs turn the governmental machine into a perilous gizmo, spiraling out of control and flinging loose bolts and nuts in all directions. Amena is detained on suspicion of terrorism and forbidden to contact an attorney. 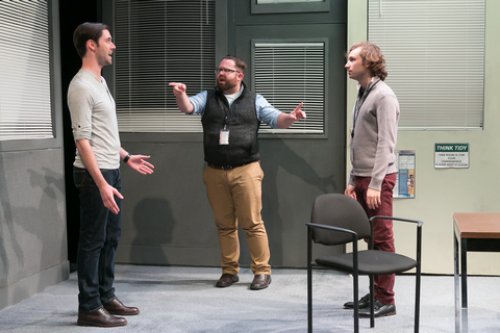 The teller, his supervisor (Connor Carew) and two FBI agents (William Ragsdale, Greg Brostrom) are all self-serving individuals in one way or another. They strive to make themselves look more competent than they are—or just try to save face. Fear and paranoia bubble up. Things become even more complicated with the arrival of Brendan and, eventually, Carol (Mary E. Hodges), a smart but weary attorney from the American Civil Liberties Union.

Miller presents us with a nightmare scenario that is grimly funny and full of unexpected turns. It’s fast moving, too: told in a series of compact scenes ending in blackouts. The dialogue, consisting almost entirely of short, snapped lines (some of them non sequiturs or near non sequiturs), amuses, even as it displays humanity as a fairly sorry lot. The play’s immigration theme is, of course, a timely one.

The casting by Stephanie Klapper is one of the production’s greatest strengths. This is a fine ensemble of players. Broukhim and O’Rourke do good work, but it’s the actors portraying the maddening bureaucrats who really shine. Zurick Is especially memorable as the smug, self-promoting but callow young teller. Caught up in a crisis, the big question on his lips is “Will I get overtime for this?”

Carew is also topnotch. His character is a get-along guy whose personal problems have a way of interfering with his work, leading him to make impetuous choices. Ragsdale and Brostrom portray the FBI men as blithering dolts who seem to mimic characters from TV’s Dragnet or other old detective melodramas. They wear their toughness and moral outrage on their sleeves when in the presence of of others. When no one is looking, though, they’re Keystone Kops. 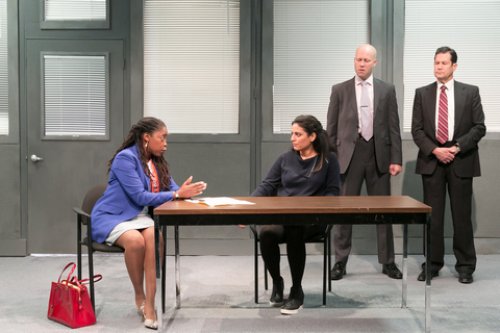 Hodges gives one of the finest turns in the show. Her ACLU attorney is articulate but brusque. Perhaps she’s kindly, too. She knows, though, the Kafkaesque nature of the system all too well, and it has clearly eroded her more idealistic impulses.

Zöe Hurwitz’s set—painted an institutional gray, with oppressive Venetian blinds closing off the outside world—functions as three different areas in the facility: the teller’s window, a conference room and an employee workroom. Lighting designer Bailey L. Rosa and sound designer M. Florian Staab have created some dramatic visual and aural effects as well as some subtle ones. (Staab also provides original music.) The costumes, by Katja Andreiev, help to establish the social hierarchy within the system.

The play’s title comes from Carew’s character. The “hope hypothesis” is the notion that, in our current environment, people have universally given up hope. Consequently, they are either attempting to destroy themselves or aiming to destroy others. That’s a fairly dire assessment of the world we live in, and one that Miller doesn’t strive to dispel. That she can project that kind of cynical outlook in such a sparkling entertainment is impressive and a bit unnerving.

The Sheen Center for Thought & Culture, 16 Bleecker Street, in Manhattan