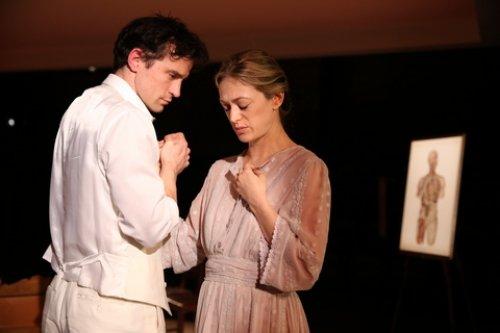 When Tennessee Williams started writing Summer and Smoke, his working title for the play was Chart of Anatomy, taken from a poem by Hart Crane. An anatomical chart becomes one of the very few props in the current Classic Stage Company and Transport Group revival of the 1948 play. Under the circumstances, the many players (a dozen in all) are often reduced to charades, as they describe a new gaudy hat, or a jigsaw puzzle, or gloves. For that matter there’s not really a set at all, only a large white platform in the center of the playing area, echoed by a large white rectangle hanging above–a kind of ceiling for the platform–and shortly after the prologue, six chairs, two of which will, at times, serve as a bench or a sofa.

It was Geraldine Page who played Alma, the leading character in Summer and Smoke, in both the first Off Broadway production as well as the film version, in 1961. The neurotic, “hysteric,” and even half-crazed Alma is here played by Marin Ireland with appropriately scenery-chewing effects. 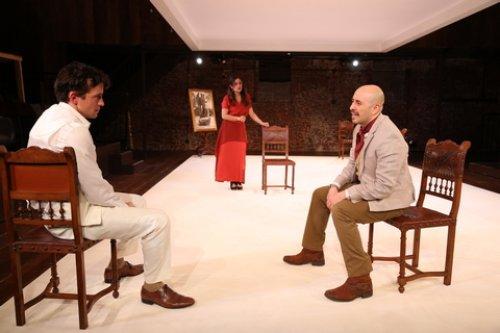 The production begins oddly, as Alma arrives. But instead of mounting the platform or stage, she awkwardly walks around it, as she’s talking with John (Nathan Darrow), who also walks around it, rather in the dark. (R. Lee Kennedy is credited with the lighting design.) They’re ostensibly at a water fountain, with a statue of an angel, here indicated not by a genuine statue but by an illustration of one, on a poster on an easel. The angel is named “Trinity,” Alma explains, adding that, “My name is Alma, and that’s Spanish for soul.”

Though you wouldn’t know it from their appearance, Alma and John are supposed to be children during the Prologue, when John is essentially coming on to Alma. After their exchange, the rest of the cast arrive with those chairs, and all in period costumes, designed by Kathryn Rohe. (Summer and Smoke is set at the turn of the last century.)

In addition to Ireland, the best performance of the evening is provided by Tina Johnson as the busy-body, Mrs. Bassett, who when asked if she’s “certain” about the latest bit of gossip she’s relayed, responds, “I’m always certain before I speak.” Also fine is Phillip Clark as John’s stern father, the resident doctor of Glorious Hill, Mississippi, where the play is set. (Though Summer and Smoke is one of Williams’ more “problematic” plays, it still contains the poetry, which circumscribes his writing.) 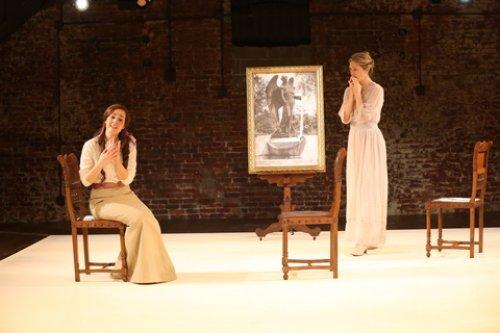 Essentially about the ongoing conflict between the uptight Alma and the hedonistic John, Summer and Smoke is more character-driven than story-oriented. This may partly explain why the play is often viewed as a failure.

When John returns home from medical school–apparently 16 years after the Prologue, which occurs in 1900–his father tells his “infernal,” reprobate, prodigal son to stay in a hotel, before relenting and inviting him to stay at home. And even though the tables have turned, and Alma would now like to enter into a romantic relationship with John, he is a boozing and lascivious reprobate who prefers and plans to marry the sexy Rosa Gonzalez (Elena Hurst). He even calls Alma a “white-blooded spinster.”

Alma’s equally crazed and neurotic mother is played with winning effects by Barbara Walsh, and her “Reverend” father is T. Ryder Smith. But unlike the first Off Broadway production reviewed by Harold Clurman, the current one never rises above the play’s failure to become something of an accomplished piece.